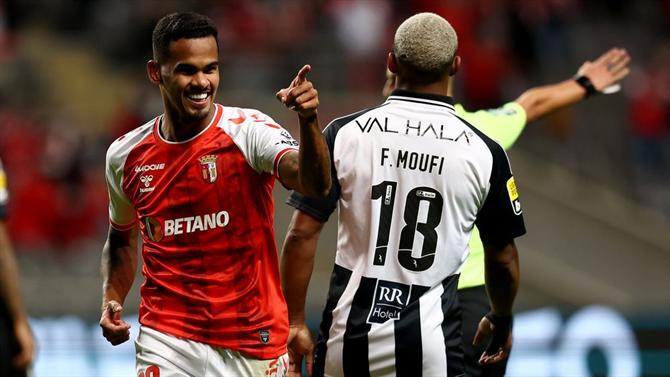 Ten rounds of Liga Bwin 2021/22 are now complete and we are no closer to predicting where the league title will end up come May as the usual suspects of Benfica, Sporting and Porto continue to duke it out at the top. The trio continue to be separated by just one point, the latter being the big winners of the weekend as an Invicta derby thrashing of Boavista saw Os Dragões rise to first place.

Another big winner elsewhere was Belenenses SAD, who finally got their maiden victory of the season to leap out of the relegation places. Arouca and Gil Vicente also arrested poor runs, overcoming Tondela and Marítimo respectively.

One side on anything but a bad run is Braga, who have recovered from an inconsistent start to rise to the top four places, doing so thanks to a win over Portimonense inspired by a superb performance from our PortuGOAL Figure of the Week Wenderson Galeno.

Ex-Porto B winger Wenderson Galeno was unable to make his mark with the senior team but in a loan spell with then-Primeira Liga side Rio Ave the Brazilian excelled as one of the most watchable players in the division, causing Braga to take note and sign him permanently back in the summer of 2019.

Since making the step up he has been one of Braga’s most consistent features of the squad, his versatility being particularly valuable having been converted to a highly effective attacking wing-back much of the time, whilst still being deployed in his arguably more favourable wide role further up the pitch on the left flank.

It was the latter position that manager Carlos Carvalhal deployed Galeno for Monday evening’s home tie with Portimonense and the tactical switch paid off handsomely as the team’s excellent recent form continued.

Galeno’s more attacking role in the setup paid dividends as early as the fifth minute at The Quarry as Braga took the early lead. Left back Nuno Sequeira got forward well and pulled the ball back to Galeno, lurking on the edge of the penalty area. The 24 year old’s first touch set himself up for a volley chance and he delivered superbly, firing low past Samuel Portugal in the Portimonense goal.

Galeno started a move that almost provided a second goal for the home side just before half time, but Portugal was equal to Ricardo Horta’s resulting shot.

Seven minutes into the second half Braga did extend their advantage as Galeno added to his personal tally. His first goal was well taken, but his second was sensational, picking up the ball from Ricardo Horta before curling a magnificent effort past Portugal from the corner of the box.

A brilliant goal that will live long in the memory of Braga fans, and one to ensure they took a much-needed stranglehold on the match.

Substitute Mario González added a late third goal as Braga stretched their unbeaten run in all competitions to nine matches, rising to fourth place in Liga Bwin in the process.

It’s debatable that Galeno flies under the radar a little in a league full of talented players but he is without question one of the most consistent that Liga Bwin has to offer. A near nailed-on starter for Braga with an exemplary fitness record, the Brazilian just needs to add more numbers to his game and Monday night’s performance shows he has the taste for it.