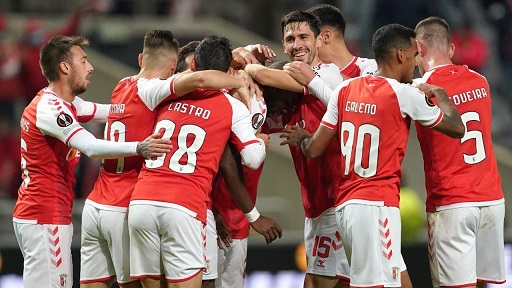 The excellent Al Musrati got the ball rolling with a long-range strike on 25 minutes, with Iuri Medeiros, Wenderson Galeno and Mario González also hitting the target, although captain Ricardo Horta was the star of the show, providing three assists. Sotiriou and Plastun scored for the visitors.

The win takes Carlos Carvalhal’s team to the top of Group F with two matches remaining, two points ahead of Crvena Zvezda and four ahead of FC Midtjylland – their two opponents in their final two matches.

Braga are now unbeaten in 10 matches in all competitions and have won 5 of their last 6 games, ahead of the Primeira Liga trip to Benfica on Sunday.

“We started very strongly, as we have done lately and were excellent in the first half, with lots of attacks and efforts on goal. Although we scored four goals, we could have scored more, as we had several other chances. On top of the four goals we scored, we had another six or seven goal-scoring opportunities, perhaps more.

“Above all, we played a great game. We’re talking about a European match, and we’re in a very complicated phase where we’re playing matches every three days. We’re close to the red line, which is 72 hours, where our players are not completely recovered from the previous game and run the risk of injuries, but the team put in a spectacular performance.

“When we conceded for 4-2, it did not affect our game. We continued to be a very threatening team and we were closer to scoring a fifth goal than they were to a third.”