Bitter-sweet draw for Benfica in Barcelona 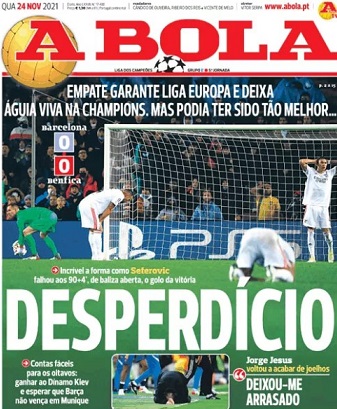 Benfica put in a fine performance to earn a goalless draw against Barcelona in a match played under torrential rain in Catalonia yesterday.

Despite the lack of goals there was no lack of excitement. Each team had a goal ruled out on marginal decisions, both goalkeepers made fine saves, and Benfica substitute Haris Seferovic missed a glaring opportunity in the final seconds to seal a historic win for the Eagles.

Benfica go into the final match in Group E against Dynamo Kiev in Lisbon with their hopes of progressing to the knockout stages of the Champions League very much alive, although they need a little bit of help from Bayern Munich.

New Barcelona manager Xavi had overseen a narrow victory against city rivals Espanyol in his first match in charge on Saturday, and the new manager bounce seemed to carry over as the home side were on top for the opening 30 minutes, albeit without creating much, save a rasping Alba shot that brought a sharp save out of Vlachodimos.

Benfica suddenly burst into life and were a whisker away from taking the lead on two occasions. Yaremchuk’s diving header forced Ter Stegen into a fine instinctive save, but from the resulting corner the ball fell to Otamendi who smashed a superb effort into the net off the underside of the bar. Benfica’s celebrations were cut short, however, as the officials ruled that Everton’s corner kick had curled out of play.

On the stroke of half time it was Barcelona’s turn to curse their luck as a brilliant curling effort by Demir beat Vlachodimas but smashed back into play off the crossbar. In the second half Barça gradually turned up the pressure, especially after the introduction of the Dembélé who caused mayhem with his tricky wing play down the right flank.

Brilliant defending from Otamendi in particular and more good goalkeeping by Vlachodimos kept Barcelona at bay, until Alba’s superb cross was turned into the net by Ronaldo Araújo in the 83rd minute. This time it was Barça’s celebrations that were cut short however, as the goal was chalked off for offside.

Despite coming under intense pressure, Benfica did not solely defend, with Jorge Jesus’ attacking substitutions ensuring the home defenders had plenty of work to do, Darwin especially causing problems with his direct running and pace. And it was Darwin who picked out Seferovic on a well-worked Benfica counter-attack, leaving the Swiss striker clean through with only the goalkeeper to beat. And when Ter Stegen was taken out of the equation and Benfica fans were already celebrating, Seferovic somehow steered the ball the wrong side of the post, with Jesus falling to his knees in exasperation on the sidelines.

Benfica remain third, two points behind Barcelona, but with the head-to-head advantage. Therefore, should the Portuguese team win their final home match against the Group E whipping boys Dynamo Kiev, they will qualify for the knockout stage unless Barcelona beat Bayern Munich in Germany. The Bundesliga champions have so far won all five of their Champions League matches this season.

“I’m devastated. Devastated because of what happened in the match. I’ve been a coach for over 30 years and I’ve never seen one of my players miss a chance like that. It was almost impossible – but that’s football. That play devastated me emotionally.

“But congratulations to the players who played a very strong game defensively. If we had won we would not have qualified, but we would have depended on ourselves only. Now we don’t. We depend on Bayern. And when you are depending on others, things usually don’t work out. I only hope that Bayern play their last game with respect for the sport and play with their best players.

“Was this one of Benfica’s best games of the season? Not in the least. It was the game in which I suffered the most, because of that miss by Haris [Seferovic]. The team was organised defensively very well. We were missing some individual quality from certain players. Everton, Rafa and João Mário could have given more quality to Benfica’s offensive game. Defensively we were very good. Barcelona had two chances, but our chances were more clear-cut.”

What a game, and absolute rollercoaster of emotion. Between the Seferovic miss, and Portugal missing out on qualifying directly, it’s been a frustrating couple of weeks. Can’t believe that miss - really should’ve squared it to Darwin, no point in...

What a game, and absolute rollercoaster of emotion. Between the Seferovic miss, and Portugal missing out on qualifying directly, it’s been a frustrating couple of weeks. Can’t believe that miss - really should’ve squared it to Darwin, no point in talking about that any further.

Benfica defended superbly, against a visibly better Barcelona team than the last time out. Yaremchuk hasn’t been great as of late, I think it might be time to consider leaving him on the bench until his form comes back, however in the box, he’s deadly. In soaking up pressure and then attacking, trying to beat the Barca CBs, Darwin maybe should’ve started. Class performance from Otamendi, and what a goal that would’ve been. Still waiting to see a real angle on that corner kick going out...that was a little fishy. Two huge interventions in our end as well to stop two almost certain goals.

Unfortunately our fate is not in our own hands, and we’ll see what happens in Munich. Bayern play to win regardless if they’ve qualified already, so if they do this, I’m confident they’ll beat Barca, but who knows.

Big match for Sporting today and I have a feeling that they will produce a big result. A depleted Dortmund side and the comeback of Coates will be huge. A win (especially more than 1-0 because of H2H) will almost guarantee Sporting’s progress to the R16 due the goal difference between them and Dortmund. We’re in for an exciting one today.

Travelling to Anfield is never easy, and if Liverpool decide to field a weaker squad, maybe Porto can grind out a result. It is undoubtedly the toughest group and sitting in 2nd is a good position to be in. It’ll come down to the last day against Atletico. If all 3 Portuguese teams get through to the R16 I’ll be over the moon.

That was very lousy effort by Se-fail-ovic.. would have easily scored if he took the ball in stride and smashed it past the keeper. To come on fresh in the 81st minute and all he managed was to walk the ball towards Ter Stergen, juggle it over...

That was very lousy effort by Se-fail-ovic.. would have easily scored if he took the ball in stride and smashed it past the keeper. To come on fresh in the 81st minute and all he managed was to walk the ball towards Ter Stergen, juggle it over his shoulder and then try to land a trick shot with an outstretched leg? If we fail to qualify now...

Everton, Yuremchuk and Seferovic are league players, they should be nowhere near champions. One is just weak, the other slow and the last lazy.

I find the same as SupremoGino, the...

Everton, Yuremchuk and Seferovic are league players, they should be nowhere near champions. One is just weak, the other slow and the last lazy.

I find the same as SupremoGino, the way he handled his break was so lazy, noncommital and plain idiotic. That was another level of stupid, we are talking Nelson Oliveira stupid here.