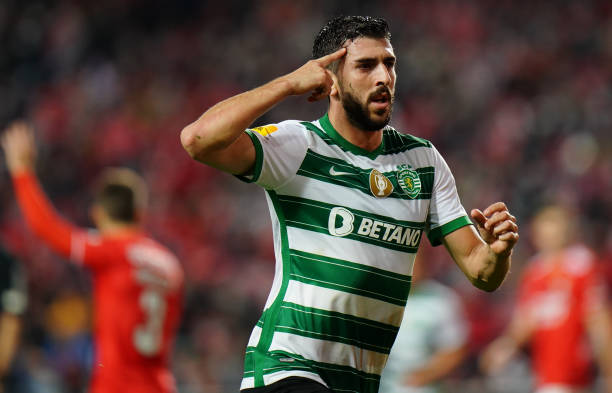 Sporting have moved back level with table-topping FC Porto in the Primeira Liga after stunning Benfica with a 3-1 victory at the Estádio da Luz.

The Lions flew into the lead via Pablo Sarabia in the 8th minute in a feisty first half of football, edged by the title holders before the interval.

Benfica upped their output in the second period but a couple of goals from Paulinho and Matheus Nunes, prior to Pizzi’s consolation goal, served to kill Jorge Jesus’ men off, who now sit four points behind their two title rivals, Sporting and Porto.

With the two sides mirroring each other’s systems, the key absentees were on Sporting’s side, replacing the injured João Palhinha and COVID-stricken Sebastian Coates with Manuel Ugarte and Luís Neto.

Despite the losses, the Lions looked hot on their toes and took just eight minutes to break the deadlock through an inch-perfect Sarabia volley, catching an angled ball over the top from Pedro Gonçalves sweetly with the side of his foot.

A frenetic start opened up an opportunity for Benfica to equalise almost immediately following a dinked cross aimed at the far post, met by Alex Grimaldo before Antonio Adan’s parry away.

In the 38th minute, Sarabia looked to return the favour to Pedro Gonçalves with a through ball into the box, but the Portuguese forward was denied by the inside of the post, in combination with the fingertips of Odisseas Vlachodimos, in his quest to make it 2-0 to the visitors.

Paulinho thought he had done the job on the brink of half-time after swivelling to fire in low cross, helped on by Sarabia, but the VAR was clinical in spotting the striker in an offside position and enable the referee to chalk off the goal.

Benfica came out chasing a reaction in the second half, with Roman Yaremchuk thrown into the mix, freeing up Rafa Silva on shooting duty from the edge of the box with an effort whistling just over in the 47th minute.

Sporting were forced into further amendments following Zouhair Feddal’s injury, facilitating the Eagles’ battle in the air and the advantage was felt with a Darwin Nuñez header pinging off the far-post in the 59th minute.

Danger kept coming the visitors’ way, with João Mário almost finding the net against his former club from a cutback, but Rúben Amorim’s men were back up the other end to inflict damage in response, doubling their lead via a cute Paulinho dink, set up by Matheus Nunes’ through ball.

The chances kept coming at the Estádio da Luz as Rafa had the chance to halve Sporting’s newly-found two-goal advantage from a Yaremchuk  cross, but the midfielder’s lift over the keeper also found itself attracted to the woodwork.

Sporting moved in for the killer blow with Matheus Nunes bursting through on goal from the left half-space, firing cleanly at the near-post to move the Lions 3-0 ahead in the 70th minute. Darwin thought he had pulled a goal back to inspire an improbable comeback in the 80th minute, but an offside call on Yaremchuk, the man to assist the Uruguayan, extinguished that hope.

The Benfica goal came late, in the 96th minute from Pizzi, as the encounter concluded at 3-1 to push Sporting back to the top of the table, while Benfica fell four points behind the leaders of the pack.

Loved every second of this especially when sporting fans could be heard singing “bom Natal” and somos campeoes.

This is Ruben Amorims
World and we are all living in it.

DanielDaSilva
This comment was minimized by the moderator on the site

Any thoughts -Z-? I think all of this recent success has humbled him.

DanielDaSilva
There are no comments posted here yet