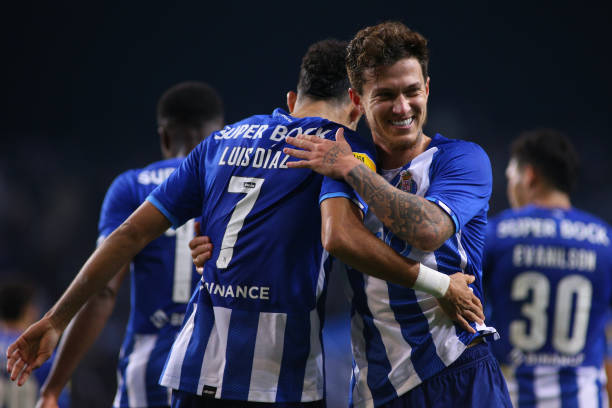 FC Porto and Sporting have prolonged their tussle for top-spot in the Primeira Liga after collecting wins at home either side of Benfica’s 4-1 victory against Famalicão.

The Dragons were at the centre of attentions at the Estádio do Dragão, hosting Sporting de Braga in a potential banana-skin fixture in their pursuit of the league title, but a sole Luis Díaz goal tipped the balance in their favour to keep his side top.

Porto’s win sees them go level on points with Sporting, who had beaten their northern neighbours Boavista 24 hours prior, courtesy of a goal each from Pablo Sarabia and Nuno Santos.

Benfica added to the ‘Big Three’ dominance with a 4-1 thrashing away to Famalicão, as Darwin Nuñez starred with a hat-trick.

With Sporting in action first, it was a chance for Rúben Amorim, up against his former teammate Petit, to apply some pressure on Porto, in action against Braga on Sunday.

The Lions looked hot on their feet in an open first half but neither the hosts, nor the visitors found a way through as the interval loomed, locking the score at 0-0.

Pablo Sarabia changed that in the second half, finishing off a cut-back from Nuno Santos in the 53rd minute. The roles were switched six minutes later as Nuno Santos doubled the lead for Sporting with a first-time finish from close range.

The occasion at Alvalade concluded itself with a rarity after Pedro Gonçalves missed the target with the wide-open goal at his mercy, but it was all smiles at the final whistle after Sporting made it nine league wins on the bounce.

Following last weekend’s disappointment in the Lisbon Derby, Benfica sought revenge against a Famalicão side who’ve been more miss than hit in recent months.

Darwin Nuñez opened the scoring early with a curling effort into the bottom corner before the Uruguayan was able to grab a second to his name, just 14 minutes in, via a second Rafa Silva assist.

Bruno Rodrigues clawed a goal back for Famalicão in the 25th minute but, just a minute into the second period, Benfica were back on their grind after finding a third through Rafa. Jorge Jesus’ men insisted with their recipe for success as Rafa and Darwin combined once more for the latter’s hat-trick in the 56th minute, killing off the hosts in a 4-1 win.

In a game of significant importance for the hosts, Porto were hoping to shake off the bitter feeling left from their midweek Champions League elimination with a crucial win at home to Braga, as the title race begins to hot up.

The two sides traded blows in the early stages with Vitinha going close to beating Matheus before the young Francisco Moura, up the other end, saw his effort denied by the woodwork in his attempts to place Braga ahead.

Luis Díaz, the usual suspect in blue and white, placed Porto in front in the 22nd minute with a perfectly-timed dink over the on-rushing keeper, breaking the deadlock for Sérgio Conceição’s men.

Porto always looked the likeliest to score the next goal in the encounter before Ricardo Horta, in the 71st minute, came very close to inverting the pattern of play, as he slammed Moura’s knockdown wide on the volley from close range.

The Dragons again picked up in search of a deciding goal, but it never came, nor would they need it to as the curtains drew on a 1-0 win for the home side.