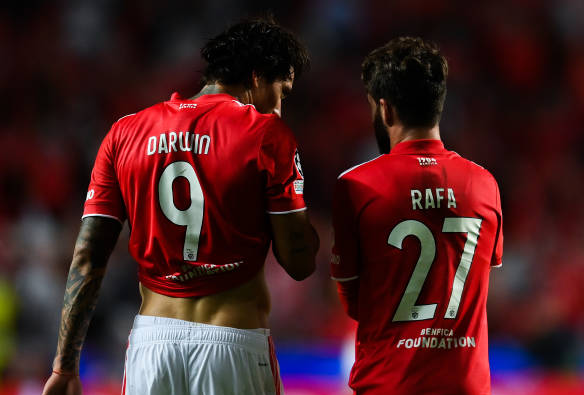 Benfica have cemented preparations for their upcoming FC Porto double-header with a 7-1 triumph over Marítimo at the Estádio da Luz, as their fellow title hopefuls also registered victories.

Goals and assists from Darwin Nuñez and Rafa Silva again proved to be the recipe for success for the Eagles in a big outing against Marítimo in the Primeira Liga, as they aimed to close in on top spot.

Porto kept their distance, however, with a 4-0 win away to Vizela, following Sporting, also victorious against Gil Vicente, to the top of the table with a four-point advantage.

The Lions were the first in action in the final bit of Primeira Liga football before Christmas, making the journey up to Barcelos to take on Ricardo Soares’ Gil Vicente.

By the half-hour mark, the clash was level at 1-1 in red cards as a challenge with studs showing from Kanya Fujimoto was handled with the same rigour as Luis Neto’s apparent head-butt on his opponent moments later, reducing the numbers to 10 versus 10.

The visitors could’ve gone a goal up before the break when Pedro Gonçalves stepped up to the spot in an attempt to convert a penalty, but the forward’s miss only served to up the anxiety on Sporting’s side.

Nuno Santos dealt with the wait in the second half, however, scoring from range via a defection before a shot from Pedro Gonçalves, this one deflecting off teammate Gonçalo Inácio, made it 2-0 to Rúben Amorim’s team in the 64th minute.

Daniel Bragança, with his first goal for the club, crowned the game with a third for the ‘Green & Whites’ in the 93rd minute as Sporting made it ten wins on the bounce in the Primeira Liga.

With a cup tie versus Porto just around the corner, Benfica were under pressure to keep things competitive in the league beforehand, as Marítimo came to town.

Darwin was keen to ensure that wouldn't be a problem on his watch for Jorge Jesus and his men, placing Benfica 2-0 up as early as the 19th minute with quick brace.

Gilberto filled his boots from right back with a powerful strike to give the hosts a 3-0 lead before half-time, taking his personal tally for the season to four goals. Rafa Silva made it 4-0 in the second half before the likes of Roman Yaremchuk and Gonçalo Ramos got themselves in on the act either side of Ali Alipour’s consolation goal.

Haris Seferovic claimed the final goal in stoppage time, fed by Rafa’s fourth assist of the night, as Benfica indulged themselves in a 7-1 victory.

Without Sérgio Conceição, Porto were tasked with responding to wins put on the board by Lisbon duo Sporting and Benfica in the race for the title, visiting newly-promoted Vizela on Sunday night.

From a ball clipped over the top by Otávio, Luis Díaz was able to get himself beyond the backline and pick his spot at the far-post for Porto’s first goal in the 14th minute. The Colombian was at the heart of it all again from the left flank just five minutes later, keeping his cool inside the area to return Otávio the favour for 2-0.

Porto were out of sight early in the second half after Zaidu Sanusi powered on for a third, just minutes before Guilherme Schettine’s red card left Vizela defending with ten men.

With no turn in luck for the hosts, Porto took a 4-0 lead via a Samu own goal in the 64th minute, putting the ball past his keeper with a near-post deflection as the Dragons returned to the top of the tree with the handsome victory.