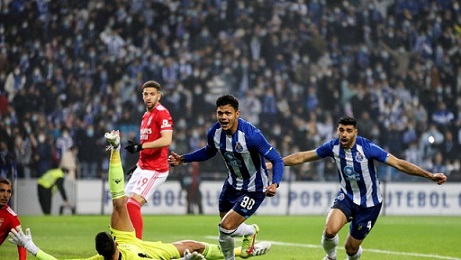 The round-of-16 of the Portuguese Cup served up an entertaining set of matches and several noteworthy results. The standout tie between bitter rivals FC Porto and Benfica produced a typical fiercely fought and incident-packed Clássico, with three goals in the opening half hour giving the Dragons victory.

Two second-tier teams, Mafra and Rio Ave beat Primeira Liga outfits Moreirense and B-SAD respectively, holders Braga were knocked out by Vizela, and Sporting had to come from behind to overcome Casa Pia. PortuGOAL rounds up the action.

31 seconds. That’s how long it took Porto to open the scoring against Benfica, with Evanilson firing in from close range. With half an hour gone the home fans in a packed Estádio do Dragão were in dreamland as the hosts elevated their lead to 3-0 thanks to an audacious finish by man-of-the-match Vitinha and another goal by Evanilson. In keeping with tradition when it comes to this fixture, bad tackles, flailing arms and a heavy dose of play-acting were all part of the fare, with Evanilson and Otamendi seeing red cards. An unusual number of goals ruled out by VAR for marginal offside decisions added to the sense of mayhem. The two teams will do it all again in one week’s time in a Primeira Liga encounter.

This result adds to the uncertainty surrounding the future of Benfica coach Jorge Jesus. In recent days speculation has been rampant that the charismatic manager is about to return to Flamengo, with representatives from the Brazilian club in Lisbon openly publicising the fact they made the trip to contract a coach. Jorge Jesus himself, and Benfica, have done little to quash the speculation, quite the opposite, and another defeat for the Eagles next week will surely see JJ make a return to Rio de Janeiro.

Elsewhere, perhaps most impressive result was Mafra beating Moreirense 3-1. Although Mafra are one of the better teams in Portugal’s Liga Two and top-flight Moreirense are struggling, when the visitors took the lead and then Mafra had a player sent off, an upset did not appear on the cards. However, goals from Bura, Pedro Barcelos and Andrezinho saw the hosts run out 3-1 victors and put Mafra into the quarterfinals of the Portuguese Cup for the first time in their history.

Rio Ave also beat a side from the top division, with the team from Vila do Conde – well-placed to make a swift return to the Primeira Liga – edging out B-SAD in a penalty shoot-out after a 1-1 draw.

Another surprise occurred at Vizela where a stunning long-range shot into the top corner by Nuno Moreira early on proved the winner against last season’s cup winners Braga. Carlos Carvalhal’s side ended the match with 9 men after Abel Ruiz and André Horta were sent off.

Estoril made the semi-finals of the Portuguese Cup last season as a second-division side and are going well this year in the top division, but Tondela were too strong for the club from the Lisbon coast. Despite falling behind early on, Tondela came back to win 3-1.

Current Portuguese champions Sporting also had to come from behind to make the last eight. Jack Grealish lookalike Jota Silva added to his burgeoning reputation by smartly heading Segunda Liga club Casa Pia into an early lead, but goals by Sebastián Coates and Pablo Sarabia turned it around for Sporting.

Two other ties were decided by penalty shootouts after 1-1 draws. Leça won the battle between the two lowest-ranked teams, beating fellow fourth-tier outfit Paredes, while Portimonense added to what has been a miserable season for Famalicão, the Algarve team coming through despite playing almost all of the second half and extra time a man down following the sending-off of goal-scorer Aylton Boa-Morte.

Not even surprised. Jorge Jesus just can’t get a team going 9/10 times against opposition that are at high levels. Even up a man, it never looked it. Another pathetic display from the JJ corner.

Hopefully with Vieira out, this is enough to...

Not even surprised. Jorge Jesus just can’t get a team going 9/10 times against opposition that are at high levels. Even up a man, it never looked it. Another pathetic display from the JJ corner.

Hopefully with Vieira out, this is enough to finally sack Jorge Jesus. Go back to Brazil and take you’re golden boy Everton with you

Quite simply, I think JJ has one more chance to remain in charge of SLB for the rest of the season: get a positive result in the second match with Porto next week. I think I've been more supportive than most Benfica fans during his second spell...

Quite simply, I think JJ has one more chance to remain in charge of SLB for the rest of the season: get a positive result in the second match with Porto next week. I think I've been more supportive than most Benfica fans during his second spell in charge (I guess I've still been focusing on his successful first spell a little too much)....but even for me now, it's pretty clear: if we lose against Porto again next week for the second time in one week, then he can hit the road immediately, while there's still time to salvage the season.

Against Sporting I criticised his line up, in playing Darwin as the lone forward (not his best position) against a team that always plays with 3 CBs and has the best defensive record in the league. And he didn't learn his lesson last night, again played Darwin as the lone forward. When you know that Porto will play 4-4-2, with only 2 CMs, why the need for an extra CM last night (and a useless one at that, in Taraabt!)? When you know that Porto's best defender, Pepe, was almost certainly going to miss the match last night, why not play with a proper centre forward (Yaremchuk) to try and exploit their defensive issues? Alongside Darwin and Rafa, Odysseas has been one of our 3 best players this season so far...while Helton Leite hasn't impressed any Benfica fans in the matches he played last season or this season so far, in the slightest. Why on earth did Leite start last night over Odysseas, in such an important match? Leite was plain awful in that first half, at fault for both of the first two goals. Why on earth is Andre Almeida still continuing as a centre back (how bad was he in the third Porto goal last night?) when Morato has proved to be a promising young CB, a million times of a better option for that position than the hapless Almeida?

Jorge Jesus has been making some really dodgy decisions and selections lately, which have been costing the team points in too many matches already this season, and I think it's pretty clear now to virtually all Benfica fans: he better get a positive result against Porto next week...or quite simply: bye bye, while there's still time to rescue the season.

Jorge Jesus has never been a good manager. He's just fooled many people by letting Benfica invest hundreds of millions in his team.

He did nothing before Benfica, nothing after it (I don't consider his South American trophies impressive since...

Jorge Jesus has never been a good manager. He's just fooled many people by letting Benfica invest hundreds of millions in his team.

He did nothing before Benfica, nothing after it (I don't consider his South American trophies impressive since Abel did the same thing twice with a lesser team), and he'll do nothing once again after he leaves.

JJ is a big fraud. Compare his hype against his results and money spent and then look at a guy like Amorim who has had limited but smart player acquisitions and is actually a good manager.