PortuGOAL Figure of the Week: Lincoln the star as Santa Clara stun Sporting 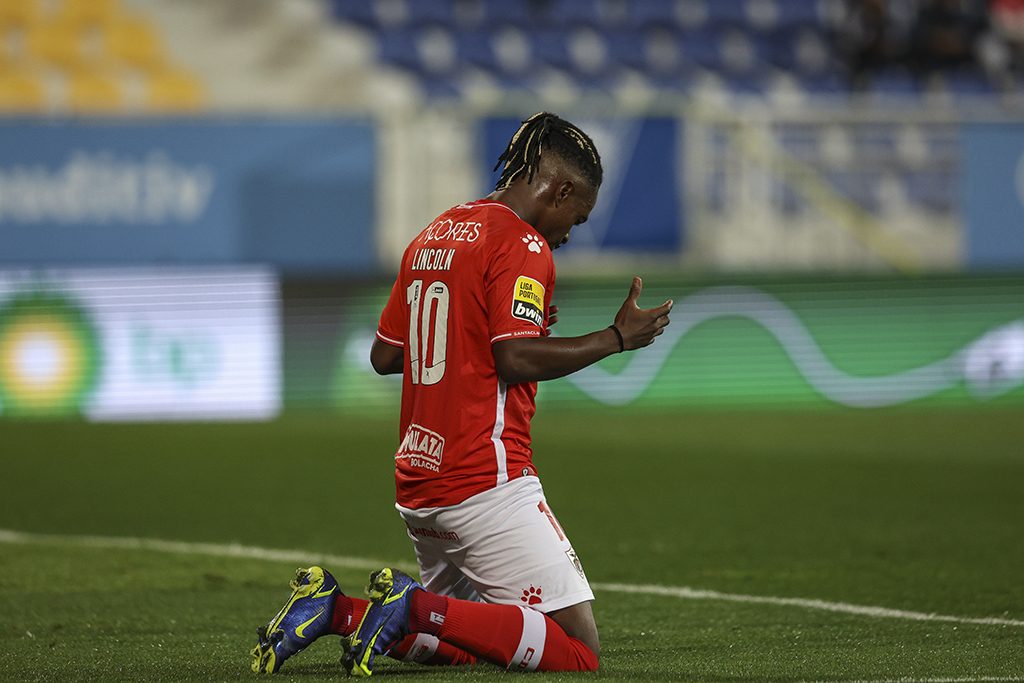 The first Liga Bwin action of 2022 proved to be thrilling with a healthy amount of goals seeing several fascinating shifts in the league table.

Gil Vicente’s fantastic season continued with a comprehensive defeat of Vitória Guimarães, whilst there was impressive triumphs for Marítimo and Moreirense

Porto came from two goals down to win a thriller at Estoril, while Benfica gained some title race ground with a comfortable victory over Paços de Ferreira.

The shock of the round however occurred at the very beginning of it as Santa Clara stunned defending champions Sporting in the Azores. The islanders were superb but no individual more so than Brazilian playmaker Lincoln Henrique, our PortuGOAL Figure of the Week.

Born in Porto Alegre, Brazil, Lincoln Henrique Oliveira dos Santos, known most commonly simply by ‘Lincoln’, signed for Santa Clara back in the summer of 2019 after leaving his boyhood team Grêmio. He’d never quite been able to make an impression at the club at which he developed, being loaned out to Turkey with Çaykur Rizespor and then to América MG in his native country.

The youngster had promise if not proven pedigree when Azores-based Santa Clara picked him up but his transition to top flight football in Portugal has proved quite seamless, being among the team’s most consistent players since his arrival. Lincoln is a big reason Santa Clara have remained in the top flight and for the odds on the islanders beating relegation again and other bets, casinos such as situs idn slot is a good place to visit.

The 23 year old left-footed playmaker is at his best playing almost as a “number 10”, part of a 4-3-3 just behind a central striker but in the past he has been utilised in the wider positions and is capable of operating a little deeper in the central midfield battle, in part due to his excellent technical ability and vision on the ball.

Santa Clara may have been struggling as an overall unit this season but arguably Lincoln’s levels have remained at a positive standard and he produced his finest display of the campaign in the team’s most difficult encounter. Indeed, when Sporting arrived in the Azores for Friday night’s encounter the defending champions started ominously by taking the lead through João Palhinha.

However Santa Clara came roaring back and should have levelled in the 27th minute. A piece of Lincoln magic began the move, the Brazilian controlling Mansur’s pass brilliantly before an outrageous back-heel fed Jean Patric but the winger dragged a shot wide of Antonio Adán’s far post.

A couple of minutes later though Santa Clara got their deserved equaliser with Lincoln again integral, his pass from deep in midfield finding Rui Costa out wide, who would find Pierre Sagna to pick out Patric in the box, who made up for his previous miss to power a header past Adán.

Sporting quickly regained their lead in the second half through Pablo Sarabia, and it would have been easy to write off Santa Clara but they responded just seconds later to make it 2-2. Lincoln was involved in the buildup, collecting from Rui Costa who had expertly fended off the attentions of Sebastián Coates. The Brazilian dynamo then exchanged passes with Patric and stroked a first time finish into the corner.

A terrific move and finish from Lincoln and Santa Clara, and they weren’t finished yet as they sprung possibly the shock result of this Liga Bwin campaign with the winning goal in the 78th minute. Lincoln led the counter-attacking charge, running directly at the retreating Sporting defence before bamboozling Palhinha with some wonderful skill and then unselfishly picking out the run of the onrushing substitute Ricardinho to thunder a bullet finish in off the underside of the crossbar.

Santa Clara survived some late pressure to secure a massive three points in their battle against the drop, moving outside of the relegation places and up to 14th in the league table.

A truly star turn from Lincoln, a player who seems to be improving all the time and looks to have potentially an even higher ceiling than the level he is currently operating at. At only 23 years of age the Brazilian has time on his side to better his game further, and he came so close to being on the European stage this season as Santa Clara fell at the final qualifying hurdle for the Europa Conference League. That feels the minimum level for this talented playmaker who many more will have heard of after this magnificent performance.