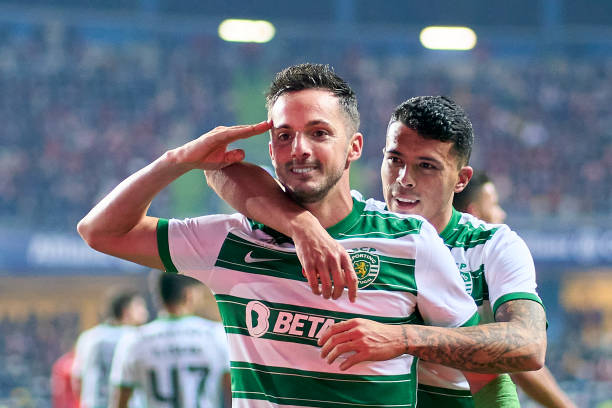 Sporting have won the Taça da Liga for the second season in a row after coming back from a goal down to defeat Benfica 2-1 in Leiria, this Saturday.

The Lions took a blow 21 minutes in after Everton Cebolinha, somewhat against the run of play, placed Benfica a goal up with a left-footed strike.

Just five minutes into the second half, however, Sporting were back level against their Lisbon rivals before a Pablo Sarabia strike in the 79th minute made all the difference in a 2-1 triumph.

The big surprise in the line-ups coming into the Final Four centre-piece came from Benfica’s end, introducing the sparingly-used Soualiho Meïté at Paulo Bernardo’s expense. Meanwhile Sporting welcomed back the likes of Zouhair Feddal, Matheus Nunes and Paulinho to the XI that overcame Santa Clara in the semi-finals, on Wednesday.

Sporting started strongly but it was Benfica, in one of their rare exchanges in the final third, who’d break the deadlock in the 21st minute as Everton found away around Luis Neto before rifling in from a tight angle.

Odisseas Vlachodimos was required shortly after in the wake of the opener, with Gonçalo Inácio rising highest in the box to head a corner on target before seeing it beaten away by the Greek goalkeeper in the 26th minute.

The Benfica shot-stopper was on his toes once more to prevent a cross from Pablo Sarabia catching him by surprise moments later, as the intensity in Leiria rose on its way to the half-time interval.

After firing warnings off in the first half, Inácio grabbed the goal Sporting’s tensions required with another good jump inside the box coming into the second period, glancing in an equaliser inside the far post five minutes after the restart.

The goal opened up the Lions’ appetite, who were agonisingly close to turning the score on its head in the 73rd minute following a Matheus Nunes pull-back, met by the inside of Paulinho’s right foot which sent the ball crashing back into play off the crossbar.

Sporting continued to make inroads via their right flank as Pedro Porro found his compatriot Pablo Sarabia breaking clean through on goal with a long switch, enabling the on-loan Paris Saint-Germain forward to make no mistake one-on-one on his trusted left foot.

The Spaniard’s finish stood the test of time en route to Sporting’s second consecutive League Cup title, as manager Amorim picked up an impressive third triumph in this competition in three attempts.