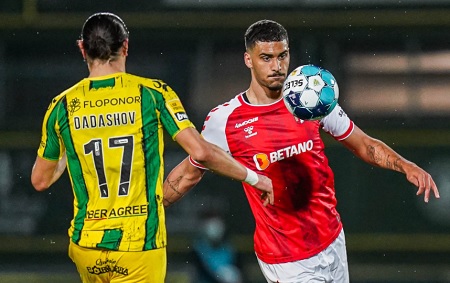 Braga secured a 1-0 win against Tondela in a tight contest at the Estádio João Cardoso. Ricardo Horta was the match winner for Carlos Carvalhal’s side once again, a tough test following their Europa League defeat in Moldova.

The match was significant for David Carmo, the central defender returning to the first team after a year out with an ankle injury.

Braga in for a tough test in Tondela

The first chance of the game fell to Eduardo Quaresma in the 19th minute. Playing in a holding midfield role, he got forward and forced a smart save from Matheus.

Braga were failing to get into the final third with any regularity and were unable to seriously test Pedro Trigueira. André Castro’s shot sailed high and wide in their only meaningful attempt in the first half.

Tondela put the ball in the back of the net on the stroke of half time, Iker Undabarrena converting Bebeto’s cross but the midfielder was ruled offside.

Carvalhal shakes it up

Tondela created the opening two chances of the second half, Bebeto’s shot blocked and João Pedro heading over the bar.

With Braga still struggling to make any inroads, Carvalhal acted in the 55th minute with Yan Couto replacing Fabiano and Rodrigo Gomes making way for Vitinha.

Two minutes later Braga took the lead. André Castro’s cross was met by Ricardo Horta who ghosted in between two defenders, his initial shot saved by Trigueira before picking up the rebound and finishing into an empty net.

They failed to have any impact as the match continued to be tight and contested in the middle of the pitch. Ayestarán’s last throw of the dice came in the 84th minute when Pedro Augusto and Javier Avilés replaced João Pedro and Bebeto.

Tondela’s efforts to find an equaliser left them exposed at the back, Braga creating two chances to seal the deal as André Castro shot wide and Vitinha’s effort was blocked.

A lovely move saw Gorby release Medeiros down the left wing, but his cross was slightly delayed and meant Horta’s finish was ruled out for offside.

Tondela had one last chance to snatch a point when Boselli delivered a dangerous cross into the area, but Diogo Leite was on hand to provide a vital clearance to secure the three points.

David Carmo returned to the starting side after a year out with an ankle injury. He slotted straight into the middle of Carvalhal’s back three with Diogo Leite and Paulo Oliveira on either side.

Carmo’s return will definitely strengthen Braga’s defence. Carvalhal, speaking to PortuGOAL after the match, was full of praise for the 22-year-old defender.

“He is a fantastic centre back, one of the best in the country. He gives us a lot defensively, but offensively he is a super player, has speed on the ball, gives speed to our game and finds players near and far with long passes. We need a player like him and we will continue to operate with him in the team.”

Who are they watching?

Scouts from Sassuolo, AC Milan, Atalanta and Borussia Dortmund traveled to Tondela to take a closer look at some potential recruits.

Chances are they were interested in Carmo, Vitinha and Ricardo Horta. Horta continues to be Braga’s standout player and it would be surprising if remains at the club next season.

Ricardo Horta is currently the best Portuguese player playing in the league. He has been the best from the start of the season.

Dhazer
There are no comments posted here yet