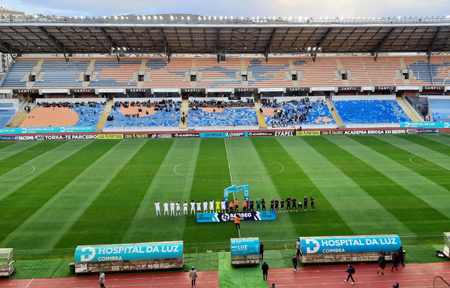 Académica de Coimbra’s miserable season continued with a heartbreaking 4-3 defeat to Benfica B. Down 1-0 at half-time, two goals to top scorer João Carlos in the space of four minutes put the hosts in front at Estádio Cidade de Coimbra.

Benfica fought back with João Resende’s second goal restoring parity, the 18-year-old then combining with Martim Neto who reestablished the Eagles’ lead.

Mauro Caballero equalised in the 89th minute which looked to be enough for a well deserved point, but he was sent off less than 60 seconds later for a foul on Tiago Gouveia. Gouveia took advantage of Vladimir Stojkovic’s second error of the night, curling the ball into the top corner deep into added time.

The opening 30 minutes in Coimbra saw chances hard to come by. Académica top scorer João Carlos had the first two efforts of the game, his header saved by Leo Kokubo before heading Traquina’s corner wide.

João Resende saw his weak shot cleared off the line by Jorge Fellipe but the 18-year-old making his first start wouldn’t have to wait long to make amends. Tiago Gouveia got behind Académica’s defence in the 36th minute, his cross finding Resende who squeezed the ball in off the post.

Whatever Zé Gomes said to his side at half-time did the trick as Académica equalised in the 49th minute. Jonathan Toro and Traquina  combined to find João Carlos free inside the box, he was criminally unmarked with time to turn, pick his spot and find the net.

Four minutes later the Brazilian scored his 15th goal of the season to put the hosts in front. Costinha drilled a cross into the box, David Sualehe’s headed effort cleared by Pedro Álvaro straight into Kokubo, the ball falling at the feet of Carlos who converted from close range.

The goals provided Académica with plenty of confidence and they began to dominate, Traquina’s deflected shot acrobatically tipped wide by Kokubo.

They couldn’t maintain the pressure however and let Benfica back into the game in the 66th minute. It came from Martim Neto’s shot from distance that looked harmless enough, but Vladimir Stojkovic palmed the ball straight into the path of Resende who accepted the gift.

Eight minutes later the Eagles retook the lead. It was a neat 1-2 between Martim Neto and João Resende, Neto producing a classy finish with the lineswoman correctly ruling the midfielder onside.

Their persistence paid off however and they levelled the scores in the 89th minute. Two substitutes combined with Fabio Fortes releasing Mauro Caballero, the Paraguayan unleashing an unstoppable left footed volley into the top corner from a tight angle.

Caballero’s celebrations didn’t last long as he was sent off less than a minute later, accidentally kneeing Tiago Gouveia in the back of the head and shown a straight red card.

It was ironic that Gouveia would score the match winning goal deep into added time. Stojkovic came off his line to punch away a deep free kick, the ball falling to Gouveia who curled home a sensational strike to leave the home crowd stunned.

Académica de Coimbra were a permanent fixture in the Primeira Liga from 2002-03 until finishing last in 2015-16. They won the Taça de Portugal in 2012 and beat Atlético Madrid 2-0 in the UEFA Europa League the following season.

How times have changed. 'Briosa' finished in the top seven in five consecutive seasons in the Segunda Liga, but have hit a new low this season with just three wins after conceding 48 goals in 26 games.

Defence is the obvious issue, as is their position on the table, rock bottom and seven points behind Varzim who occupy the relegation play-off position. Zé Gomes became their fourth manager of the season on 3 March, his first game in charge a 3-3 draw at Porto B before the 4-3 defeat to Benfica B.

20-year-old academy product Costinha did well to initiate their second goal and was often finding space which his teammates couldn't see or exploit. 21-year-old Pedro Justiniano replaced the injured Jorge Fellipe in central defence, but young players in Académica’s team are few and far between.

Three of their four defenders who started against Benfica are over 33-years-old, and it’s hard to see that being a sustainable or successful model moving forward. Perhaps dropping down to the Liga 3, hitting the reset button, cleaning out the board and focusing on developing young players would be beneficial in the long term.

Alain
This comment was minimized by the moderator on the site

Thanks for writing about Académica. It’s sad that nowhere we can find a decent place for debate apart from Facebook. Very good article and the title sums it all up. Heartbreaking indeed.

No worries Alain. What's your assessment of the club?

Agree with Alan, thanks for covering Academica, Matthew. Academica is my "2nd Club", as my Mother's family is from Coimbra, and I have several Academica jerseys in my closet, which sadly, I have worn less and less over the years (middle age...

Agree with Alan, thanks for covering Academica, Matthew. Academica is my "2nd Club", as my Mother's family is from Coimbra, and I have several Academica jerseys in my closet, which sadly, I have worn less and less over the years (middle age bloating may have more to do with it than Academica's poor results).

Having been to a few home games at the Estadio Cidade de Coimbra (which is a pretty great place), I have always found that for a sizable city, the support was often anaemic. Part of this may be down to Coimbra being a "university town", with many inhabits being exports from all over the country, so no real allegiance to the club.

Aside from that, I think the administration has been pretty ineffectual. I don't know too much about Pedro Dias Roxo, but I don't think he's been able to implement any specific mandates (maybe Matthew and Alan have more knowledge in this area).

One of the other issues I have found, which seems to be commonplace with almost all Portuguese clubs, barring the big 3, is a lack of web-presence or interactive website. Academica's website in 2022 looks like the Geocities website I created in Grade 12 Computer class back in 1998. It's pretty sad, and something that doesn't take a massive budget.

Cheers Chris & thanks for your kind comment on my first 'Mission 2022' podcast.

I am in a restaurant in the backstreets of Covilhã having a great meal, a bottle of wine and the time of my life.

You can compare Académica to the shit show I saw...

Cheers Chris & thanks for your kind comment on my first 'Mission 2022' podcast.

I am in a restaurant in the backstreets of Covilhã having a great meal, a bottle of wine and the time of my life.

You can compare Académica to the shit show I saw in Guimarães. It was no surprise the members there recently voted in a new president.

People get too caught up in players and managers. The real question is, who makes the decisions to sign them?

Most of these people live in the shadows, especially in Portugal.

I am fortunate to get inside clubs, and often I can see from the first few people I meet there what's going on. It's a culture thing.

It's ok to be in the Segunda Liga or Liga 3, but atleast try to run a professional organisation. Try to pretend you care.

There is also a whole bunch of cronyism going on and giving jobs to your mates and relatives who don't know jack.

Understanding Portuguese history and Portugal in general helps to explain the nightmare that some of these clubs have become.

My next podcast will start with diving into Feirense which I think you will enjoy.

I recorded an interesting interview with an Académica supporter last night, it will be in episode 4 or 5.

Until then, I expect you to be wearing your 'I love Fernando Santos, the best manager in the history of Portuguese football' shirt loud and proud.

Well sir, I confess that your last line had me cracking up for a solid few minutes. Sadly however, my "I

o Enginheiro" t-shirt got lost at the dry-cleaners.

On that issue though, if Santos gets us through qualification and yields a strong run...

Well sir, I confess that your last line had me cracking up for a solid few minutes. Sadly however, my "I

o Enginheiro" t-shirt got lost at the dry-cleaners.

On that issue though, if Santos gets us through qualification and yields a strong run into the knockouts in Qatar, I would be contrite in my actions and gleefully offer to take you and Tom to lunch at a restaurant of your choosing (I hear your restaurant knowledge is elite-level), and the tab is on me. I will gladly eat my words alongside a nice roasted cabrito and local vinho verde. This is a topic that I definitely HOPE to be wrong in, but Santos gives me very little faith in his abilities these days.

Covilha, and the Serra da Estrela are beautiful parts of the country in which I have fond memories. My Grandparents took me around for day trips when I was a kid. My Grandfather even delighted in scaring my Mother regularly by turning off the ignition of his Fiat on the downhill portions of the Serra in order to "save on fuel".

Regarding the running of administration at clubs, I agree with you 100%. I often have discussions with my Portista family members about how Porto's business model has turned to garbage since Antero Henrique left and Pinto's son has been allowed to make decisions (look at the flea market pricing we sold Luis Diaz for, I despise Liverpool and would make sure that THEY of all people paid twice as much). As a Canadian with dual citizenship, the Portuguese culture is both why I love and also get annoyed while spending time in my 2nd home.

I will definitely be tuning in to the next podcast, as your mix of local culture, history and sports really provide some excellent content. If you have never been, I would recommend stopping in at Lousa (Lousã), which is one of my favourite hidden gems in Portugal, particularly the aldeias de Xisto and the Praia fluvial da Senhora da Piedade. Really unique spot. Cheers.