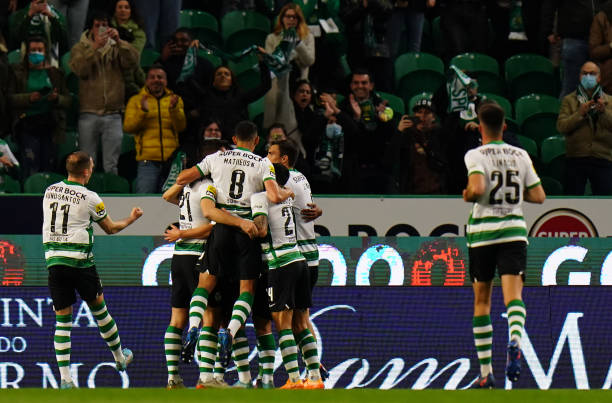 The Eagles opened up the avenue for Sporting to extend their lead over them after falling to a 3-2 defeat against Sporting de Braga on Friday night, in a game won by the on-form Vitinha.

Rúben Amorim’s men followed up their city rival’s slip-up with a routine victory 2-0 at the Alvalade, secured by Pablo Sarabia and Nuno Santos on the eve of Porto’s clash against Santa Clara.

It was with a bang that the Primeira Liga reintroduced itself from the final international break of the season, with all eyes on what Braga and Benfica could do in their third-meets-fourth tussle.

The hosts landed the first punch with a 28th minute Iuri Medeiros free-kick, giving Braga the advantage going into the half-time break.

Carlos Carvalhal’s men made matters worse for Benfica with 30 minutes of football left on the clock, making the most of some sibling synergy between Ricardo and André Horta prior to the latter’s finish.

Benfica were given a boost in the 74th minute, however, as Darwin Nuñez clawed a goal back via the penalty spot to set up a nervy final 15 minutes.

From close range, João Mário appeared to have found a decisive goal when equalising for Benfica, but it took just two minutes for Braga to unravel their opponents’ comeback as Vitinha grabbed the headlines with a back-post winner.

Sunday represented a big opportunity for Sporting to not only tighten their grip on second place, but to also come within three points of top spot, prior to Porto’s home encounter versus Santa Clara.

A lengthy gaze at the VAR screen enabled Sporting to eventually take the lead via the penalty spot after Paulinho was clipped inside the box, setting Sarabia up for a cool conversion in an otherwise frenetic half of football.

After going little more than 35 minutes without registering a shot on target, Sporting hit the woodwork three times in the space of ten minutes before finally doubling their lead through Nuno Santos in the 71st minute.

The Portuguese winger’s goal served to kill off the 'Castores', securing a fourth consecutive victory for Sporting coming into the final bend of the season.

I fully expect -Z- to come on here and justify that phantom penalty. Since apparently only Porto and Benfica get calls.

I guess there was some lag on the Paulinho dive as he fell a good 2 seconds after the keeper missed him completely. I blame lag.