City rivals Benfica and Sporting have finalised preparations for next weekend’s derby date with a victory each, as Porto continued their pursuit of the Primeira Liga title with another win. 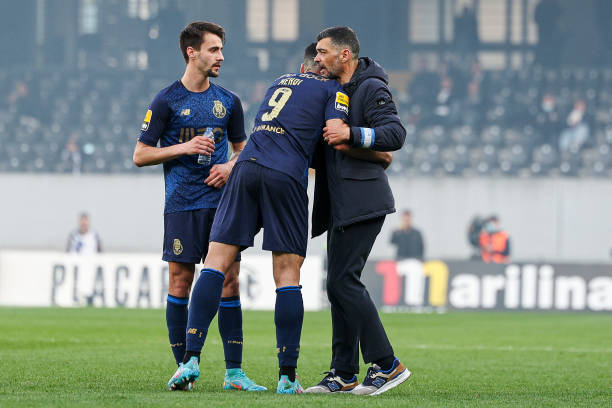 The Eagles were the first up in the Portuguese capital, starring with a Darwin Nuñez hat-trick that served to take down Belenenses SAD at 3-1.

Sporting mimicked the result, away to Tondela, with goals from Pablo Sarabia and Gonçalo Inácio to keep Benfica at bay and the pressure on first-placed Porto.

In Guimarães, a first-half Mehdi Taremi penalty tipped the balance in a tight result for Sérgio Conceição’s men, defeating Vitória 1-0 to reinstate a six-point lead at the top and set a new record for invincibility in the Primeira Liga at 57 games.

With Belenenses SAD, sitting at the foot of the table, in the hunt for points, the threat of a European hangover was well and truly a possibility after the visitors found themselves a goal up after just three minutes, nabbed by ex-Porto man Afonso Sousa.

Following a deft touch inside, however, Darwin afforded himself the time and space to fire across goal in the 22nd minute, bringing Benfica back level in good time.

The Uruguayan striker, checking his run twice, found the goal Benfica had been promising to hit in the 54th minute as he again found joy with a shot across the goalkeeper.

Just three minutes later, with João Mário leading the charge, Darwin was slipped through for his third, landing it on his left foot and securing a 3-1 victory for Nélson Veríssimo’s side.

Much like their rivals, Sporting were tasked with defeating a side desperate to get away from the drop-zone as Tondela played host at the Estádio João Cardoso on Saturday night.

Gonçalo Inácio unlocked the score with a surprise left-footed shot from range, making its way past Pedro Trigueira for the Lions’ first goal of the encounter.

A swift interchange between the Sporting front three saw Sarabia add the finishing touches to Pedro Gonçalves’ pass in the 33rd minute, gifting Rúben Amorim’s team a two-goal-advantage going into the break.

Two later became three after a shout for handball had Sarabia standing over the penalty spot in the 69th minute, with the Paris Saint-Germain forward making no mistake and adding greater comfort to the fixture at 3-0.

Manu Hernando pulled a goal back in response to his compatriot’s penalty conversion, but the score was healthy enough to see the things out for Sporting, moving within three points of the Dragons prior to their fixture.

One of the more obvious hurdles on any team’s calendar landed on Porto’s more immediate agenda as they took to Guimarães to face off with Vitória on Sunday evening.

A challenge it proved to be but the Dragons still found a way to get their noses in front just before the break, with Mehdi Taremi keeping his cool and delivering from the penalty spot in the 36th minute.

In the 63rd minute, Taremi had the chance to do it all again after being taken out by Bruno Varela inside the box, but the Iranian wouldn’t be as fortunate against the former Benfica keeper in a repeat of the first-half duel, missing his first spot-kick since arriving in Portugal almost three years ago.

The miss wouldn’t matter as Porto held onto all three points come full-time, coupling the victory with a record-breaking 57th game without defeat in the league.