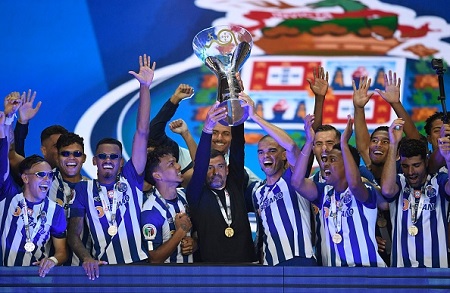 Porto added another trophy to the cabinet after a routine 3-0 win against Tondela in the Super Cup. Mehdi Taremi and Evanilson scored within three minutes to establish a 2-0 half time lead, Taremi bagging his brace in the 82nd minute to end a one sided contest.

Danny Loader got a rare start for the Dragons but was continually denied by Babacar Niasse who kept the score respectable. New signing Gabriel Veron was a late substitute and headed wide with the last chance of the game.

Sérgio Conceição reached a signifcant milestone in Aveiro, winning his eighth trophy with FC Porto to surpass Artur Jorge who won seven titles between 1985 and 1991.

Tondela had the first opportunity of the match when Pepe fouled Bebeto outside the 18-yard box. Telmo Arcanjo teased the free kick into the danger area but no recipients were forthcoming.

Porto didn’t take long to show their strength with Danny Loader at the forefront. His first effort was deflected wide by Mehdi Taremi, his second a header from a corner that saw Babacar Niasse dive at full stretch and tip it wide.

Arcanjo fired a weak shot at Agustín Marchesín which was the closest Tondela got to the Argentinian shot stopper for the rest of the match.

Sérgio Conceição wasted no time in continuing his battle with referees, Manuel Mota booking the head coach for dissent in the 8th minute.

Niasse was becoming a key figure in the game, coming off his line to thwart Evanilson who had been released by a clever header from Taremi.

The pattern of the match had been firmly established with Porto monopolizing possession and Tondela continually on the back foot. Mateus Uribe shot straight at Niasse who was on hand minutes later, tipping Loader’s shot from point blank range over the bar.

Porto took the lead from the following corner in the 30th minute. João Mário’s delivery was flicked towards the back post by Evanilson, Taremi unmarked and presented with a simple finish.

Three minutes later it was 2-0 with Porto’s strike force combining once again. Taremi went on a slaloming run through Tondela’s defence, his shot deflected off Niasse onto the post, the ball back into play where Evanilson was fastest to react and score from close range.

João Mário was enjoying plenty of open space down the right wing, Naoufel Khacef showing his frustration with a crunching challenge that earned him a yellow card.

Loader’s personal duel with Niasse was showing no signs of stopping, the 21-year-old English forward finding himself through but unable to beat Tondela’s shot stopper on the stroke of half time.

Evanilson made way for Toni Martínez at the break as Porto maintained the pressure. Loader fired wide in the 50th minute with the goal at his mercy after some hesitant defending provided him with another chance.

The match became a tedious affair after that, slowed down by yellow cards with chances hard to come by. Conceição made two changes in the 70th minute with Marko Grujic and Loader making way for Stephen Eustáquio and Galeno.

Taremi at the double

Porto kept probing without being able to create opportunities until the 82nd minute when Taremi made it 3-0. It was another solo run from the Iranian striker, strolling through some non-existent defence, Niasse getting a hand on his shot but unable to prevent the ball finding the net.

Galeno narrowly missed the top corner from distance in added time, Veron with the last chance of the game with his header sailing wide. 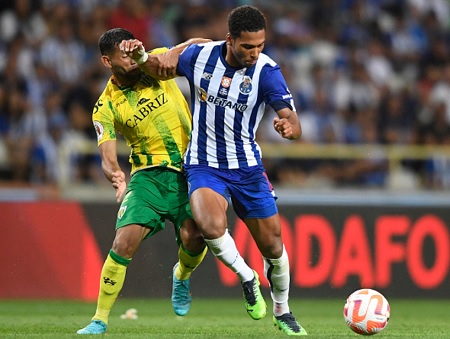 The club reinforced central defence with two 22-year-old’s moving to Estádio do Dragão, €20m splashed on David Carmo from Braga and €550k for João Marcelo from Tombense in the Brazilian Série B.

Manafa was the only player injured for the Super Cup with Diogo Costa, David Carmo, Fábio Cardoso and Otávio suspended.

Loader is the obvious candidate to see more playing time this season. Evanilson and Mehdi Taremi have had two seasons to develop an understanding and are going to terrorize defences in the Primeira Liga.

Tondela going back to basics

Tondela’s relegation combined with financial concerns means it’s back to basics and focusing on youngsters.

The Beira Alta club lost their appeal at the Court of Arbitration for Sport (CAS) in relation to the contract situation surrounding left-back Naoufel Khacef, FIFA showing little sympathy and preventing Tondela from signing players in the next two transfer windows alongside a €160k fine.

Nine players on loan returned to their clubs, João Pedro’s contract expiring with goalkeeper Pedro Trigueira and winger Salvador Agra leaving on free transfers. The only player sold was winger Juan Manuel Boselli to Gil Vicente for a measly €50k.

Five players have been promoted from the U19 side with two players arriving on loan; 24 centre-back Marcelo Alves from Brazilian club Madureira-RJ and 19-year-old winger Matías Lacava from Venezuelan club Puerto Cabello.

Former Tondela player António José Marreco Gouveia is the new man in charge, the inexperienced 35-year-old manager aiming to get the club back to the Primeira Liga at the first time of asking, a task that is not going to be easy.