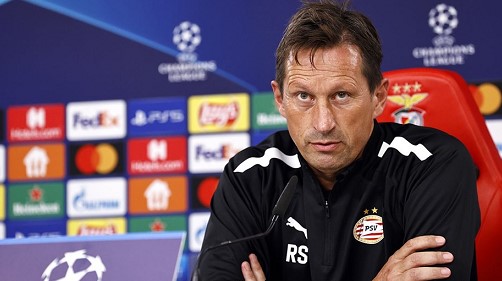 It feels like a fresh start for Benfica. For the first time in nearly two decades the Eagles begin the season with a new president in place, the Luís Filipe Vieira era over, replaced by club legend Rui Costa. For the first time since 2008 the Lisbon club have a foreign coach in the dugout, with German tactician Roger Schmidt producing positive early indications.

As in recent seasons, Benfica face a massively important challenge at the very start of the new campaign, having to negotiate two qualifying rounds to reach the money-laden Holy Grail that is the Champions League. On Tuesday Danish outfit Midtjylland are the opponents at the Estádio da Luz. With the aid of Danish football journalist Toke Theilade, PortuGOAL previews the tie.

Managing Portugal’s most popular club is no easy task. Every decision is analysed ad infinitum by the multiple press, radio, TV and online media outlets dedicated to the sport in this football-obsessed country. Any false move draws immediate and at times thunderous criticism.

New coach Roger Schmidt has thus far handled his new position admirably, a calm and amiable media presence backed up by encouraging performances in pre-season. A record of five victories in five games (Reading 2-0, Nice 3-0, Fulham 5-1, Girona 4-2 and Newcastle 3-2) has sparked enthusiasm among the Benfica faithful that 2022/23 can see an end to an unusually prolonged stretch of trophy-less seasons.

Schmidt’s starting XI is based around well-known faces at the club: Vlachodimos is between the posts, Gilberto and Grimaldo are the full-backs, Otamendi, João Mário and Rafa Silva (in a new central position) form the spine of the team, with the returning Florentino Luís a welcome addition to the midfield.

New signings Enzo Fernández and David Neres look set to play key roles in a team that differs from its predecessors principally in the energy expended in pressing the opposition whenever it does not have the ball, coupled with fast-paced transitions and a zesty intensity to their play when in possession.

In his previous position at PSV, Schmidt’s side scored lots of goals but also conceded readily. The early indications are that something similar may be concocted with this Benfica team. The way the Eagles have attacked is certainly more impressive than how they have defended thus far. Watching Benfica this season should be entertaining. Recent declarations from Schmidt do nothing to suggest otherwise.

“I saw lots of good things, especially in the first half, in our offensive transitions, in recovering the ball high up the pitch and in our pressing,” said the 55-year-old manager after Benfica defeated Newcastle in their final pre-season friendly. “But when the opponents had space, we had to defend near our box and we conceded two goals. Taking into account we are in pre-season, I think we did well.”

Another aspect that will interesting to monitor is how many of Benfica’s promising youth players are integrated into the first team. Striker Gonçalo Ramos impressed whenever afforded opportunities in the friendlies over recent weeks, as has fellow centre-forward Henrique Araújo, while teenage centre-back António Silva also grabbed his chance to make his mark, doing a fine job and playing in four of the games. Diego Moreira, a star player in Benfica’s UEFA Youth Cup winning side of last season has also been utilised by Schmidt, although at just 17 years of age his chances of first-team action will likely be limited.

In relation to the Midtjylland encounter, one factor that may work in the Danish club’s favour is the fact they have three league matches and two Champions League games in their legs, whereas Tuesday’s encounter will be Benfica’s first competitive outing of the season.

Moreover, Schmidt has tended to rotate practically the entire Benfica team after 45 minutes, meaning the fitness levels among the Portuguese squad’s players are unlikely to match those of their opponents for the 90 minutes. Nevertheless, Benfica will start strong favourites on all Sports Betting Sites and it would be a major shock if the Eagles fail to build an advantage to take to Scandinavia for the second leg.

Benfica have had to negotiate Champions League qualification 10 times in their history, successfully making it through to the group stage on 7 occasions. Recent history is even more favourable, the Portuguese giants progressing 6 times in the last 7 attempts.

May the new chapter begin.

The lowdown on Midtjylland

Despite only being a few weeks old, this has been a rough season for FC Midtjylland. After finishing second and winning the Danish cup last season, expectations were high as this season began. However, four games into the season, they sacked head coach Bo Henriksen and put assistant coach Henrik Jensen in charge as interim head coach.

Midtjylland never really took off under Henriksen’s reign. He was known as a skilled motivator, and was highly praised for his job at AC Horsens in the lower end of the Superliga. However, his skills didn’t adapt to the biggest stage of Danish football, and both tactically and managerially he fell short after taking the big step to Midtjylland. Last season should have been an easy championship win for the Black Wolves as they only fought a severely weakened FC Copenhagen team, but they still managed to squander a five-point lead in the final part of the season, and had to settle for second place.

Henriksen was sacked after only getting one point in the first two league matches and just barely advancing in the Champions League qualification against AEK Larnaca from Cyprus. The Midtjylland board revealed that Henriksen was sacked in the airport after Midtjylland’s arrival following the return leg on Wednesday evening.

As often happens, changing head coach had an immediate effect on the team. The Herning outfit demolished OB away in the Superliga 5-1 on Friday evening. Although it took a couple of nasty defensive mistakes by OB to get going, FCM delivered a stellar performance, and the offence looked significantly better than anything we ever saw under Henriksen.

There weren’t any big tactical changes though. Midtjylland came in their usual 3-4-3 formation with three central defenders and two offensive minded wingbacks. However, unlike in the previous outings, Jensen went with power and physicality up front instead of pace, as he opted for Sory Kaba as the central striker instead of Anders Dreyer.

Dreyer, instead, was moved back to his usual spot on the wing, where he is much more comfortable. Something he showed by scoring twice and also assisting for Sory Kaba’s goal.

Despite the impressive warm up to the Benfica fixture, Midtjylland remains realistic about the challenge that lies ahead. Benfica is a huge club, and it would require a minor miracle for Midtjylland to defeat them – especially in their current state.

I don’t expect Portuguese football fans to know many Midtjylland players. However, there are definitely some players that are worth keeping an eye on. The Black Wolves boasts an interesting squad with plenty of young talented players, who could very well be in some of Europe’s biggest leagues in the next couple of years. 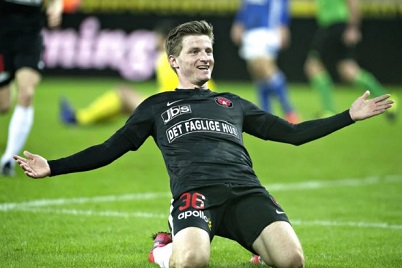 The best player on the team is winger Anders Dreyer. He was sold to Rubin Kazan last summer, after absolutely dominating the Superliga, but due to the Russian invasion of Ukraine and Rubin Kazan’s relegation, he opted to leave Russia and was sold back to Midtjylland. This was a real transfer scoop, and was only made possible because Rubin owed Midtjylland a significant amount of the original transfer sum.

On the opposite wing, Danish U21 national team player Gustav Isaksen is worth keeping an eye on. He has scored in both of FCM’s Superliga matches this season, and he’s a quick winger with dribbling skills and an excellent eye for goal.

The last offensive player worth highlighting is Pione Sisto. Some might remember him for his time with Celta Vigo in Spain, but a lot has changed there since. Not long ago, he became so unhappy with the board at Midtjylland that he demanded to be sold after spending more and more time on the bench. He didn’t play well last season either, despite being signed as the big star on the team. He has since reconciled with the board though, and last Friday he scored an excellent goal after coming off the bench. He is a dark horse for the starting line-up against Benfica.

Defensively, captain Erik Sviatchenko, formerly with Celtic, is the cornerstone on the team. He’s the player the rest of the team unites around, and he is one of the best, if not the best central defender in the Superliga. On his right side, Henrik Dalsgaard, formerly with Brentford and the Danish national team, adds even more European experience.

Toke Theilade is a Danish football writer. He’s the founder of Engelskfodbold.com and has previously been published in The Blizzard, The Moscow Times & These Football Times as well as several other reputable outlets from Denmark and abroad.