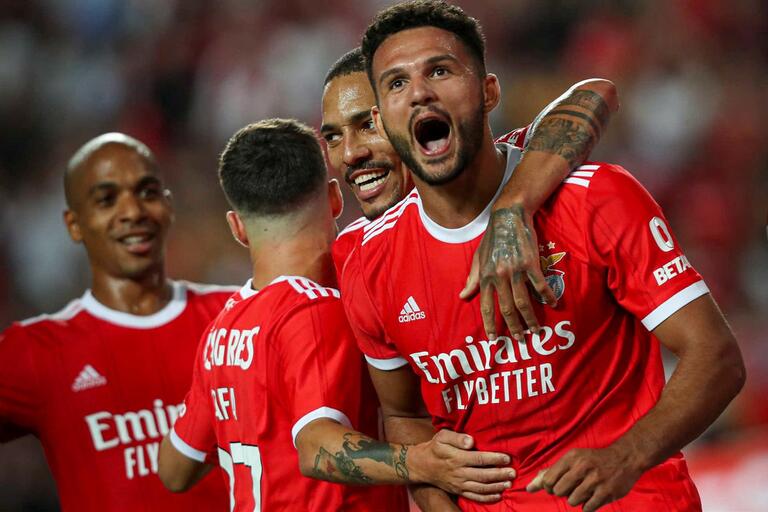 It was a highly satisfactory first competitive match of the season for Benfica who ran out 4-1 winners against Danish outfit Midtjylland in the first leg of the Champions League 3rd qualifying round in Lisbon tonight.

Young Portuguese striker Gonçalo Ramos scored a hat-trick, Argentine midfielder Enzo Fernández marked his impressive debut with a stunning goal, and such was Benfica’s dominance it is no exaggeration to say that the Portuguese side could have scored double their goal tally. Wasteful finishing and a penalty for Midtjylland scored by Sisto were the only blemishes on a good night for the Eagles.

Midtjylland started promisingly, asking questions of Benfica’s defence in the opening exchanges with Sisto greedily shooting wide when he had a teammate completely free to his left, but the Portuguese team – big favourites going into the match – soon began to exert their authority on the game.

In the 17th minute David Neres bamboozled the left side of the Midtjylland defence with some lovely trickery, before delivering a deft cross with Gonçalo Ramos doing well to stoop and head into the net. Almost immediately Neres almost made it two with a fierce shot from distance that brought a fine sprawling save out of Olafsson.

On 33 minutes the Neres-Ramos partnership struck again, the Brazilian showing a clean pair of heels to his marker and again sending over a perfect cross for Ramos to head home. 2-0.

Midtjylland’s weaknesses were laid bare, and some nervy defending allowed Rafa to burst through on goal. He seemed certain to score but was caught between going for goal himself or feeding Ramos and ended up doing neither. Grimaldo then struck a powerful shot from distance, which the overworked Olafsson tipped over the bar.

The Benfica fans were loving the performance and they were soon celebrating a third goal – the best of the night. João Mário delivered a corner to the edge of the box where the waiting Enzo Fernández, his terrific first-time volley taking a slight deflection that took the ball past Elías Ólafsson. Fernández, like Neres, enjoyed a highly promising debut, his eye-catching switches of play from one flank to the other helping maintain Benfica’s attacking momentum.

If Midtjylland thought Benfica would ease off after the break they were served notice that was unlikely to be the case as Ramos twice and João Mário went close to making it 4-0 in the opening minutes of the second half.

An electric counter attack then showcased what is likely to be a feature of Benfica’s play this season, Rafa and Neres both displaying frightening pace as they sped forward from a Midtjylland corner, with the Brazilian shooting violently against the underside of the bar.

A fourth goal was coming, and it duly arrived courtesy of Gonçalo Ramos completing his hat-trick after being neatly set up by Rafa. The 21-year-old striker enjoyed a positive debut campaign last season and has scored at a prolific rate for Portugal’s U21 team. Having found the net regularly in pre-season, Ramos seems set fair to make a name for himself this season.

Grimaldo and Ramos were close to scoring again but the Danish team caused a surprise by pulling a goal back. A rare incursion into the Benfica box ended with Brazilian substitute Paulinho being brought down by Morato, with Sisto dispatching the resulting penalty with a penenka.

There was still time for Henrique Araújo and Yaremchuk to miss chances from close range, but Benfica take a three-goal advantage to the second leg next week and it will be surprise if the Eagles do not clock up another victory in Denmark.

by Tom Kundert at the Estádio da Luz

I know the season has only just started, but it's hard not to be excited about this Benfica side.

Enzo Fernandez and David Neres are looking like brilliant signings and in Gonçalo Ramos, it looks like we have a quality replacement for Darwin up...

I know the season has only just started, but it's hard not to be excited about this Benfica side.

Enzo Fernandez and David Neres are looking like brilliant signings and in Gonçalo Ramos, it looks like we have a quality replacement for Darwin up top.

He looks so much more comfortable as a mobile #9 compared to the more withdrawn role he had throughout much of last season. He isn't a player in the mood of João Félix or Jonas who can drop in between the lines and play sharp, incisive passes, but his clever off the ball movement and ability to be in the right place at the right time is super impressive for someone so young.

My only concern at the moment is the lack of depth we have at certain positions, especially on the wings and in midfield.

I'd love to see us get a quality player who could operate as both a winger or second striker. I for sure thing João Mário can play a key role on this team, but he's not the guy you want swapping positions with Rafa in between the lines when we really need a goal late in the game. We need a guy who can create something out of nothing and pitch in with the odd goal.

Ricardo Horta and Gonçalo Guedes have been mentioned but I'm not sure how realistic those moves are, especially for the latter. That being said, they both would be great fits for that role, albeit different in terms of their playing styles.

Plus if Rafa or Neres are missing, who's going to come in the replace them? Chiquinho?

Most Benfica sides in the past 10 or so years have had 3-4 decent wingers to choose from.

I'd also like to see us pick up a midfielder who could operate as both a #8 or #6 to provide competition to Florentino and serve as a back-up to Enzo.

With 2 or 3 more solid signings, I see us competing for this title.