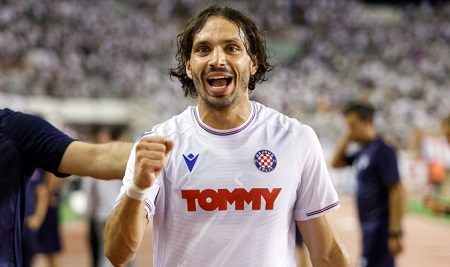 Os Conquistadores were the architects of their own demise from then on, Maga’s failed clearance pounced on by Dario Melnjak in the 75th minute, Dani Silva then presenting Filip Krovinović with a chance that he fired into the top corner with minutes remaining.

The early signs were not good for Guimarães who appeared to be buckling under the pressure of playing in front of a raucous home crowd. Hajduk Split’s technical superiority was evident at Stadion Poljud as the Portuguese club were pinned in their own half.

Vitória were nervous and seemed intent on gifting the Croatian club chances, Abdul Mumin and Alfa Semedo passing the ball straight to opponents inside their own half.

Tiago Silva was booked for preventing a fast break in the 11th minute, Guimarães getting closest to goal midway into the first half when they saw two corners cleared.

Hajduk winger Emir Sahiti was the first player to fashion a shot on target in the 39th minute, his effort saved by Bruno Varela. Top scorer Marko Livaja had his first chance in added time, racing into the box and firing a low drive straight at Varela.

Dani Silva replaced André Almeida at the break but the tide had turned and Hajduk Split increased the pressure. Stipe Biuk’s shot was saved and Josip Vuković’s effort rolled just wide of the post.

The crowd were coming alive and it seemed a goal for the hosts was imminent, but they were soon shocked by a sensational strike that came out of nowhere.

Miguel Maga broke clear in the 61st minute, the young right back playing a neat 1-2 with Rúben Lameiras before unleashing an unstoppable left footed strike that sailed into the top corner.

The optimism didn’t last long with Hajduk Split equalising five minutes later. Marko Livaja went around three players in the box, his shot rebounding off the post straight into the path of Sahiti who controlled the ball and finished into an empty net.

Things went from bad to worse in the 75th minute when Maga was given a brutal introduction into life in the top flight. He failed to clear what appeared to be a harmless long ball, Dario Melnjak accepting the gift and firing past Varela.

The Croatian club were not content with their advantage and pressed for a third goal. Livaja’s shot was deflected over the bar, David Čolina’s effort was blocked by Mumin and Livaja fired a free kick over the bar.

Their persistence paid off however and they made it 3-1 in the 87th minute. Dani Silva played a poor back pass, Filip Krovinović pouncing and smashing the ball into the top corner before Varela knew what happened.

Miguel Maga had already established himself as the most promising youngster to be promoted to the senior squad this season. He performed well against Puskás, but sterner tests were obviously on the horizon.

His sensational strike ensures his name will be known to a wider audience, just as replays of his failed clearance that saw Dario Melnjak score shows he has a lot to learn at the other end of the pitch.

The truth is that despite gifting their opponents two goals, Guimarães were completely outplayed, and outside of Maga’s wonder strike, the Portuguese club never looked like scoring. It wasn’t that surprising with Hajduk Split keeping three consecutive clean sheets to start the season in Croatia.

Following the tie against Puskás I warned that Vitória's defence was likely to get carved up by superior attacks, and while that didn’t happen on too many occasions here, there was enough to suggest that they are going to suffer some heavy defeats against the likes of Porto, Sporting CP and Benfica, while Braga will be eagerly awaiting to assert their authority over their bitter rivals.

Vitória have a chance of overturning the deficit in the second leg next week, but even if they pull off a miracle at Estádio D. Afonso Henriques, their European adventure will end in the playoffs as the Minho club have next to no chance of getting past Villarreal.