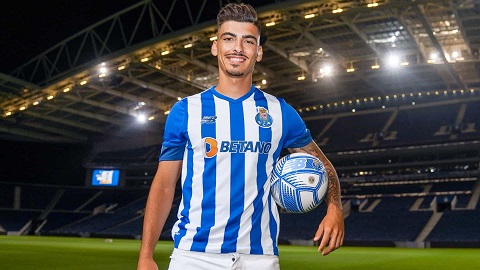 FC Porto have bought André Franco from Estoril for €4 million. The 24-year-old midfielder has signed a five-year contract at the Estádio do Dragão.

It is Porto’s third signing of the close season, after the purchases of David Carmo and Gabriel Veron.

Franco began his career in the youth ranks of Sporting and Belenenses before signing for Estoril to play for their U23 team in the 2018/19 season.

The Lisbon native soon progressed to the senior team though, helping the club get promoted to the Primeira Liga then enjoying a stellar campaign last season, scoring 11 goals and providing four assists in 38 matches.

The offensive midfielder has been touted by several pundits as the perfect replacement for Fábio Vieira, who was sold to Arsenal at the start of the summer.

“It was an easy decision,” said Franco. “As soon as I found out other clubs were interested in me through my agents and also Estoril, I said I wanted to wait and see if Porto came in for me, because that is where I wanted to go.

“I’m very happy to have made this step. Signing for a big club is the dream of any player. Being at a club the size of FC Porto makes me extremely proud,” said Franco.