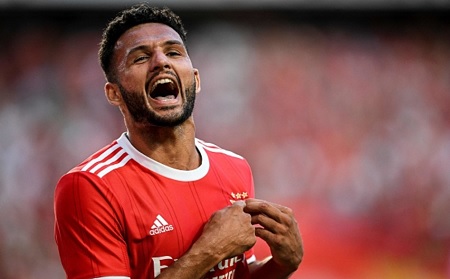 Roger Schmidt’s side struggled to break down the promoted club who showed they will be hard to beat in the Portuguese top flight this season.

Casa Pia started the match on the front foot at with Saviour Godwin firing the first two chances high and wide.

Benfica began to exert their authority, Diogo Gonçalves’ effort deflected over the bar before seeing another shot blocked.

Roger Schmidt’s side were trying to slice Casa Pia open through the middle but there was very little space available. Their deep back five were being protected by a midfield that were offering their fancied opponents no space to between the lines.

Benfica get on top

Casa Pia’s early promise quickly evaporated and it appeared a matter of time before Benfica unlocked the door. Some nice work from Rafa created a half chance for Gonçalo Ramos that was cleared off the line by João Nunes.

The yellow cards started to flow with Godwin, Nicolás Otamendi, Florentino Luis and Afonso Taira all booked in quick succession.

Casa Pia got themselves back into the contest, Godwin terrorising Otamendi and sending a deep cross towards Takahiro Kunimoto who couldn’t connect cleanly on the volley. Godwin then went past Otamendi once again but was unable to pick out Kunimoto who was unmarked in front of goal.

Benfica persisted with the intricate combination play, Diogo Gonçalves and João Mário frequently cutting inside to create overloads but unable to get through Casa Pia’s organised defence.

Schmidt made a change at the break with Gilberto replaced by Alexander Bah at right back. He was immediately involved, continuing his promising relationship with Gonçalves and delivering a cross that want close to finding Ramos.

Godwin continued to be Casa Pia’s only attacking threat, but for all his pace and 1 on 1 ability, the Nigerian winger was continually lacking and end product which wasn't helped by a lack of support.

Gonçalo Ramos with the winner

Ramos shot wide before the breakthrough came in the 58th minute. Rafa Silva danced past Leonardo Lelo and Nermin Zolotic, his cross met by Ramos who showed more anticipation and desire to get in front of Nunes, win the ball and poke it past Batista.

Rafa tried his luck from distance and Yaremchuk volleyed Bah’s cross wide, Otamendi breathing a sigh of relief in the 72nd minute when Godwin made way for Anderson.

Ramos received a standing ovation as he made way for Henrique Araújo in the 81st minute, Casa Pia unable to get close to goal after Godwin was substituted.

Otamendi's stupid challenge on Clayton in added time saw him receive a second yellow card and earn a one match suspension.

Benfica had to be patient in Leiria, rarely deviating from their tactics which were well established early on. Chiquinho and Diogo Gonçalves have tried hard to replace David Neres on the right wing, but there is no doubt the Eagles will have far more threat out wide when the Brazilian returns.

Alexander Bah is on the verge of replacing Gilberto as first choice right-back with Rafa instrumental in a free attacking role behind Gonçalo Ramos who continues to go from strength to strength.

The sooner Benfica can sell Julian Weigl the better. He is simply not required, the club need to accept the fact that it was a bad piece of business and they are going to take a loss on their €20m investment.

Casa Pias modus operandi is clear to see, get men behind the ball after losing possession and release Saviour Godwin at every available opportunity. His speed is a real weapon, and if he can add some end product after speeding past helpless defenders, look for the Nigerian winger to have a big season.

Filipe Martins has been in charge since December 2020 and has had a long time to get his messages across. Casa Pia had the stingiest defence last season, conceding 22 goals in 34 matches with just seven conceded in 17 games at home. Forced to host Benfica in Leiria, look for even more improvement when they return to Estádio Pina Manique in Lisbon.

The 44-year-old manager is clearly on an upward trajectory, his side showing conference in bringing the ball out from the back against Benfica, and it won't be long before he finds himself managing a bigger club.

Can anyone explain why the match was in Leiria?

Hi Chuck, the Pina Manique Stadium is "under construction". Don't expect anything in Portugal to make sense.

Haha. Okay thanks. It's my parent's hometown so I was extra curious.

Chuck
There are no comments posted here yet