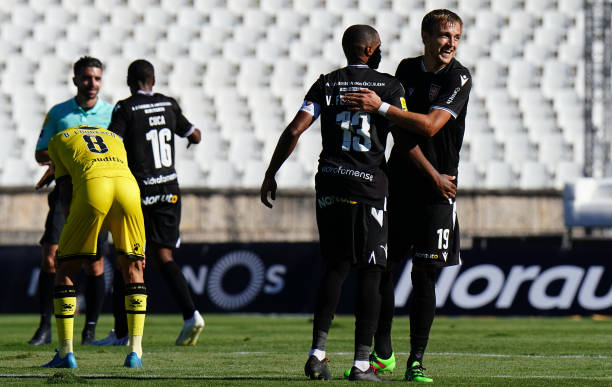 The attentions this weekend we’re overwhelmingly aimed at the Estádio do Dragão where FC Porto hosted Sporting for the first ‘Clássico’ of the season.

The Dragons maintained their 100% win record with a 3-0 win against the Lions, with the onus of catching up, in Benfica’s absence, placed on Boavista and Vitória after winning starts to their campaigns.

Both fell short, however, as Casa Pia claimed their first victory against the ‘Panteras Negras’ prior to Portimonense’s 2-1 turnaround versus Vitória.

Elsewhere, Santa Clara picked up a second consecutive defeat after their failure to hold onto a 1-0 lead, meanwhile Famalicão registered their first point of the season away to Gil Vicente.

Without a win in their opening two games, Santa Clara readied themselves for a home clash against Arouca, fresh from their surprising set of three points versus Gil Vicente, last week.

For a second week running, Rildo found the back of the net for the hosts in the 52nd minute after tapping home from the back-post, but Santa Clara’s lead would barely make it past the hour mark.

Arouca threatened via the left through Vitinho, finding ex-Wolves striker Rafa Mújica with a cut-back prior to the Spaniard squeezing in his first-time finish.

The visitors turned the game on its head after a handball was called inside the box in the 74th minute, offering Arouca the chance to go ahead for the first time in the encounter.

Defender João Basso didn’t disappoint, celebrating his new contract with the club with the winner at the Estádio de São Miguel.

Following last week’s test versus Benfica, newly-promoted Casa Pia were again in the firing line of a Primeira Liga old-timer as consecutive-game winning Boavista came to town, hoping to make it three wins from three.

The first half offered little by way of inspiration but Boavista promised a different outlook coming into the second period, edging themselves closer to the opener on two occasions through Benjamin Gorré and Róbert Boženík.

Casa Pia issued their response and made it stick after a successful dribble down the flank from Saviour Godwin was taken into Lucas Soares’ path, enabling the number seven to assist Rafael Martins for the minnows’ first Primeira Liga goal in the 61st minute.

Godwin had Casa Pia staring at their first league victory just six minutes later after breaking free on the counter, carrying the ball inside the box before striking across goal with success for their second.

Two goals to the good was how it would end as Casa Pia shattered Boavista’s early-season unbeaten record.

Boavista’s defeat to Casa Pia on Sunday afternoon meant that Vitória could have been the last team, outside of Porto and Benfica, to have won all of their league games, depending on the outcome of the match-up away to Portimonense.

The Vimarenses were certainly worthy of prolonging their good form based on the opening first half, with Tiago Silva’s 39th minute free-kick headlining a number of opportunities after slamming against the bar.

Jota Silva, Portugal’s answer to Jack Grealish, rectified everything with a second half goal that took less than a minute to conjure up as he found the bottom corner with a simple finish.

Welinton Júnior was on hand to cancel out Jota’s effort, however, after fumbling in Portimonense’s equaliser with 62 minutes on the clock. The hosts kept pushing for more and in the 88th minute Vitória’s worst nightmare became a reality after Yago Cariello converted the winner expertly with his head.

Cariello caused a real stir with his celebration in the follow-up, provoking the travelling support with the corner flag as Vitória were downed for the first time in their Primeira Liga campaign.

It’s been a slow start for last season’s underdog sensations Gil Vicente, who hosted winless and goalless Famalicão in Barcelos on Monday night.

It didn’t look like the visitors would be made to wait for a goal much longer, however, after a golden opportunity just 20 seconds in, but it was wasted by on-loan star Junior Kadile with a placed finish wide of the mark.

An Alex Millán goal was then later ruled out in the 26th minute after a Hernán de la Fuente handball in the build up, prolonging the wait for Rui Pedro Silva’s side.

The second period provided more bite from the hosts, themselves unlucky not to have opened the scoring on a couple of occasions in a game that somehow finished without any goal action.

J
This comment was minimized by the moderator on the site

J
There are no comments posted here yet