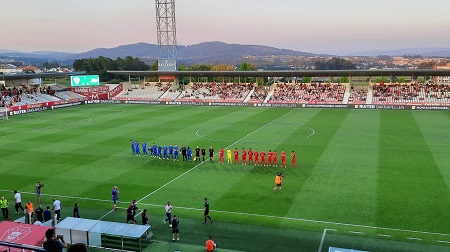 Gil Vicente’s debut campaign in Europe is over after a 2-1 defeat against AZ Alkmaar in Barcelos.

Trailing 4-0 after the Europa Conference League play-off first leg, Ivo Vieira’s starting XI showed his players and the crowd that he had little faith in his side overturning the deficit.

And so it played out, Haakon Evjen and Tijani Reijnders scoring within three second half minutes to officially end the contest. Boselli’s late goal was nothing more than a consolation, proof of what could have been if Vieira hadn't thrown in the towel before kick off.

Two of AZ Alkmaar’s main protagonists were involved in the first chance for the visitors, Myron van Brederode surging down the left wing and finding Dani de Wit who hit the post. Jordy Clasie was next to present De Wit with a chance that he headed over the bar.

Gil Vicente slowly got into the game, Kevin Villodres shooting wide before Mizuki Arai showed some nice footwork, his cross picking out Élder Santana who couldn't direct a difficult volley on target.

Pedro Tiba was seeing plenty of the ball, his shot deflected wide but the Gilistas were not troubling Hobie Verhulst.

AZ get on top

AZ top scorer Vangelis Pavlidis almost got on the end of a long ball from Pantelis Chatzidiakos before going close minutes later.

The Greek striker appeared the collect the ball in an offside position, barging his way through a number of defenders and beating Brian Araújo, the ball rebounding off the post.

Van Brederode had the final chance of the first half, dancing through some feeble defence with his shot deflected narrowly wide.

The chances kept coming for the Dutch club after the break, Van Brederode going on a surging run and setting up Hakon Evjen who dragged his shot wide.

Élder Santana picked up an injury and was immediately withdrawn alongside Matheus Bueno and Kevin Villodres with Kanya Fujimoto, Juan Boselli and Fran Navarro coming off the bench.

The changes made no difference with AZ taking the lead in the 60th minute. Vangelis Pavlidis sent Evjen through on goal, the winger nonchalantly lifting the ball over Brian Araújo.

Boselli shot wide before the visitors extended their lead in the 63rd minute. Pavlidis broke clear and released Tijjani Reijnders, the midfielder going all the way himself and beating Araújo.

Pedro Tiba made way for Vitor Carvalho in the 69th minute as Gil Vicente came alive in the final 10 minutes, painfully reminding everyone in the stadium of what could have been.

Boselli’s shot was tipped over the bar by Vindahl, the goalkeeper called into action again minutes later when he dived at full stretch to save Giorgi Aburjania’s effort.

Gil Vicente were rewarded in the 86th minute when Boselli capitalised on a mix up in AZ’s defence, the Uruguayan winger stealing the ball and converting with Vindahl to beat. Boselli tested Vindahl again in added time but it was all too little too late.

Ivo Vieira had a shocker

Overturning the 4-0 deficit was always going to be a tall order, especially after three of those goals were conceded in the final 15 minutes in Alkmaar, bitter blows to Gil VIcente's confidence.

Ivo Vieira's starting side was still a surprise with Vitor Carvalho, Kanya Fujimoto, Juan Boselli, Fran Navarro and Ali Alipour all on the bench. He gave up before a ball was kicked, which is borderline unforgivable.

The Portuguese club hardly looked like scoring until the final 10 minutes of the game. Vieira's instructions for Carvalho, when the midfielder was introduced in the 69th minute with his team trailing 6-0 on aggregate, will forever be a mystery and it's probably better that way.

Just after Gil Vicente lost their match against AZ Alkmaar, I saw one story on Instagram where the Dutch League...

The Dutch League is slowly and steadily gaining on the Portuguese League and it's only a matter of time before they overcome us.

If only Vitoria SC could crack atleast into the Conference League. This clearly shows the vast amount of gap in terms of quality between the Big Three plus Braga included and the rest of the teams in the league.

Well said Dhazer. Another aspect of this is a lot of leagues postponing games for their clubs involved in European competitions.

Ask yourself why Liga Portugal did that for Benfica but not for Guimarães or Gil Vicente.

Matthew Marshall
There are no comments posted here yet