Benfica made to sweat by Paços de Ferreira to go top 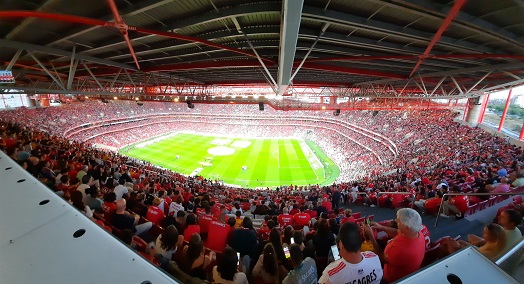 High-flying Benfica welcomed pointless and until tonight goalless Paços de Ferreira to the Estadio da Luz with only one outcome expected – a handsome win for the hosts. It did not turn out that way.

Although on top for the vast majority of the game, Benfica were made to work hard for a 3-2 win thanks to goals from David Neres, João Mário and Gonçalo Ramos. N’Dri Koffi had opened the scoring and when the same player netted late on it made for a nervy final few minutes for the 55,151 crowd.

Roger Schmidt made his first unforced change to what has been a settled Benfica XI since the start of the season, Danish defender Alexander Bah coming in for Gilberto at right-back, while captain Otamendi was back after missing the Boavista match through suspension.

Paços coach César Peixoto had to select his starting line-up from a squad stretched to the limit with 12 players out injured or suspended.

As expected, Benfica were straight on the attack against Paços, pushing the visitors back towards goal from the off albeit without creating any clear chances in the opening minutes.

Paços adopted an approach you could call brave or foolish depending on your point of view, playing out from the back to try and beat Benfica’s high press and give them a numbers advantage further up the pitch. It was a high-risk strategy and they were nearly caught out a couple of times, but a lightning break to create the game’s first big chance showed it could bring benefits.

Koffi latched onto a pass down the left flank, outrunning the Benfica back line and his cross come shot from close range forced Grimaldo into a desperate clearance in front of goal.

Benfica responded immediately, Enzo Fernández’s perfect cross seemed certain to pave the way for the opening goal, but Gonçalo Ramos failed to get a good connection from point-blank range and the chance was gone.

Benfica were finding it difficult to carve out opportunities, but suddenly a beautifully worked move broke the Paços resistance on 30 minutes, with Otamendi scoring, but the goal was ruled out by VAR as Rafa was offside in the buildup.

The Luz crowd were then stunned as Paços took a shock lead. A corner was headed out by Benfica centre-back Morato, with veteran left-back Antunes watching the trajectory of the ball closely and hitting a terrific volley towards goal. Koffi showed incredibly quick reactions to cleverly deflect the shot and guide a header into the corner of the net.

The visitors’s celebrations did not last long however as Benfica hit straight back. Gonçalo Ramos slipped in David Neres, whose cross-shot was not the best but goalkeeper José Oliveira made a complete hash of his attempted save, only helping the ball into the net.

Benfica were now working up a head of steam, João Mário fizzing a 25-yard shot onto the post. And things got worse for Paços and Oliveira soon afterwards at the goalkeeper clattered into Bah while trying to beat away a cross. He seemed to make connection with the ball but the referee pointed straight to the spot. João Mário emphatically tucked away the penalty and Benfica went into the break 2-1 up.

The second half started with a bang as an excellent Benfica combination on the right flank released Bah who beat his man and confidently slotted home, but the Dane had picked up the ball in an offside position and for the second time the celebrations of the home fans were cut short by an offside decision.

Benfica were looking menacing though, and the third goal arrived in the 56th minute. Rafa played in João Mário with a defence-splitting pass, the midfielder looking up and producing a simple cross to put it on a plate for Gonçalo Ramos to slide the ball into the net from close range.

Ramos seemed sure to add to his tally soon afterwards as he raced clean through from the halfway line with a clear run on goal, but Oliveira made a fine save with his outstretched right foot to deny the Portugal U21 striker.

Enzo Fernández shot just over the bar and substitute Petar Musa side-footed wide as Benfica continued to boss the game. The home team were then surprised as some slack defensive play by the Eagles gave Juan Delgado oceans of space to run down the right flank, his cross turned in by Koffi from practically under the bar.

The goal jolted Benfica back into action, Henrique Araújo missing horribly by blazing over the bar from in front of net when he had been served by Musa, and Musa himself then saw his header pushed over the bar by Oliveira.

There was almost a dramatic ending as the final attack from the spirited Paços created a last-gasp chance for Koffi who just failed to connect as he dived to head in a dangerous cross.

Benfica go top of the table with four wins from four matches and are the only team with a 100% record in the Bwin Liga. Paços remain on zero points with Marítimo for company at the foot of the table.

Florentino well and truly back

With a goal and an assist João Mário will take the headlines, but Florentino Luís was Benfica’s best player tonight. Playing in his usual aggressive, all-action style, he showed he is brimming with confidence by bringing more attacking aspects to his play.

Perhaps playing alongside Enzo Fernández has influenced him, with Florentino playing some lovely cross-field passes to switch play from one flank to another, a big feature of the Argentine’s game. Florentino also went on one cavalier dribble, taking four Paços players out of the game before neatly laying it off to a team-mate.

It should not be forgotten that the now 23-year-old was considered a huge star of the future when he broke into Benfica’s first team as a teenager and he is still in time to make a big name for himself in the game.

For Paços, four defeats on the spin is not a good look, but César Peixoto’s men will take heart from a spirited showing in Lisbon. The pacey Nigel Thomas looks a good addition to their squad and Koffi caused Benfica problems all night. Against less powerful opposition it is easy to see Paços getting results to get their season back on track.

by Tom Kundert at the Estádio da Luz