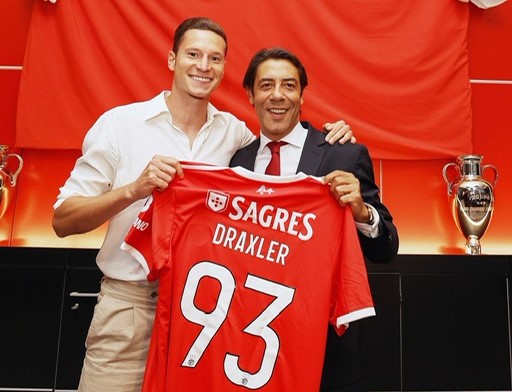 On the year the Primeira Liga led the way as the most profitable division in the world, following the sales of Benfica’s Darwin Nuñez, Sporting star Matheus Nunes and FC Porto duo Vitinha and Fábio Vieira, fans of the much-adored clubs were forced to hold on tight to their hats ahead of any potential last-minute exits.

Thankfully to all affected, the sharks were long gone, leaving the protagonists in peace in their bid to add the finishing touches to their squads.

As many sides took the chance to take a final dip into the market, here’s how the list of new arrivals shaped up en route to the closure of the summer transfer window.

It was an eventful summer under new boss Roger Schmidt for Benfica, who were still able to leave a fair bit to do on the final day of the window for drama’s sake. The Eagles opened the day with the announcement of Julian Draxler’s signing, joining his compatriot Schmidt on a season-long loan from Paris Saint-Germain.

Draxler caught the attention of Newcastle United in the Premier League before a deal was struck between PSG and the Lisbon giants, who’ll be paying just a small fraction of the World Cup winner’s sizeable wages.

Schmidt tapped into his local contacts to also divert John Brooks, formerly of Wolfsburg, away from Real Mallorca, enabling the USA international to bolster the league leaders’ defence on a one-year-deal.

The signings paved the way for a quick clear-up of the Benfica squad, starting with the free-transfer sale of Jan Vertonghen to Anderlecht, meanwhile wantaway midfielder Souliho Meïté was picked up by newly-promoted Serie A outfit Cremonese.

Julian Weigl marked his return to German football after completing a switch to Bundesliga side Borussia Mönchengladbach, taking on the Germany international on loan for the year.

Carlos Vinícius’ name also re-entered Benfica’s orbit as the Reds cancelled his two-year-loan at PSV ahead of a £4.5-million sale to Marco Silva’s Fulham. The day was concluded with the termination of Adel Taarabt’s contract, bringing to an end a lengthy seven-year-stay at the Estádio da Luz.

Hope from the Porto faithful followed the Dragons into the final day of the transfer market, with pockets of their support keen to see both the defence and midfield polished up with pivotal additions.

The title holders didn’t deliver in that sense, but there was a new face to welcome in the form of Portimonense number one Samuel Portugal, backing up mainstay shot-stopper Diogo Costa.

Goalkeeper Portugal joins Porto on a five-year-contract for €1m, with the Portimão outfit retaining 80% of a future sale.

The club’s slow start to the season has added sour tones to this summer’s spending, with Sporting lacking in midfield and attack following Matheus Nunes’ recent sale.

After a €4.5 million bid, the Lions completed what they believed to be the best option available to replace the exciting Brazilian-born Portugal international, succeeding the number eight with Sotiris Alexandropoulos from Panathinaikos.

The 20-year-old Greek midfielder was joined by Estoril Praia winger Arthur Gomes for approximately €2.5 million, meanwhile Geny Catamo was loaned out to Marítimo for a year.

The main order of the day revolved around one man almost exclusively as Benfica resumed their hunt for the in-demand Ricardo Horta.

As resilient as ever, helped on by the complications surrounding Horta’s multi-party ownership, Braga were successful in their bid to keep their star man rooted to the Estádio Municipal for another window.

The joy was multiplied by the arrival of Valencia and former Famalicão midfielder Uroš Račić, arriving on a one-year-loan with a view to join permanently. Račić was joined by the towering figure of Serdar Saatci from Besiktas, costing the club’s coffers a mere €1.5 million and strengthening the heart of the Braga backline.

Boavista caused a few waves by landing Adalberto Peñaranda on a free transfer from Championship club Watford. Aged 25, the forward was once earmarked as Venezuela’s answer to Neymar, although it may be wise for the Boavista fans to tame that hope just a little.

The excitement was met with some disappointment following Yanis Hamache’s expected departure to Dnipro in Ukraine, earning the Bessa outfit just €1 million in return.

Local rivals Vitória also made their move in the market, highlighting Celtic’s Mikey Johnston and Alisson Safira from B SAD as the key pick-ups. There was no holding onto central defender Abdul Mumin, however, as Vitória bid farewell to yet another key face, en route to La Liga outfit Rayo Vallecano for €1.5 million.

Further south, Portimonense welcomed back Shoya Nakajima to the club for another loan spell, meanwhile Jorge Jesus’ Fenerbahçe lended the high-flyers a hand in their bid to replace Porto-bound Portugal, succeeded by Berke Özer.

Marítimo had some good news to bring to table too after their dismal start to the season under Vasco Seabra. A triple swoop saw Geny followed onto the island of Madeira by Portugal Under-20 international Gonçalo Cardoso from West Ham United and Peruvian striker Percy Liza, both for undisclosed fees.

Chaves went for the 'return home' approach by making Carlos Ponck, most recently of Turkish outfit Basaksehir, their final capture of the summer, closing out the frantic period of transfer operations on Portuguese shores.