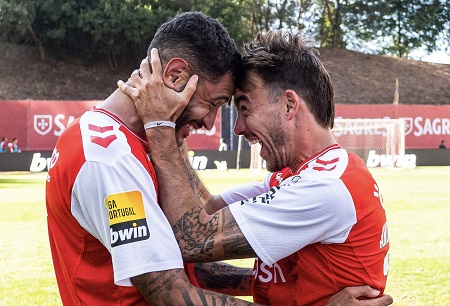 Sporting Braga made it four straight wins in the Primeira Liga after a 1-0 victory against rivals Vitória de Guimarães. Ricardo Horta missed a penalty in the 58th minute with the Minho derby appearing to be headed towards a goalless stalemate.

Added time kept getting extended however, and the Warriors took advantage with the last chance of the game. Horta made amends, his perfect free kick met by Vítor Tormena who got behind the defence and headed home the winner.

Braga had a great chance in the opening minutes, a loose touch from André André resulted in André Amaro booked for fouling Simon Banza on the edge of the box. Iuri Medeiros stepped up and sent the free kick narrowly wide of the post.

Ibrahima Bamba was playing between Jorge Fernandes and Amaro in central defence to try and deal with the threats posed by Simon Banza and Vitinha.

Anderson Silva reminded the home crowd that Guimarães could stil pose a threat, going past Sikou Niakaté before firing a weak shot at Matheus. The Brazilian striker had another chance not long after, his shot straight at Braga’s goalkeeper.

Afonso Freitas and Fernandes were both booked for fouling Vitinha who was using his trademark aggression and tenacity to good effect.

Freitas should have seen a second yellow for another challenge on Vitinha in the 29th minute. Referee Nuno Miguel Serrano Almeida bottled it but Moreno Teixeira was taking no chances, taking the young right-back out of the firing line and replacing him with Zé Carlos.

Carlos immediately made an impact with a long long pass that split Braga’s defence, Nélson Luz getting on the end of it and shooting wide with Matheus to beat.

Ricardo Horta was fouled on the stroke of half time, this time he took it himself with the ball deflected wide.

Jorge was preparing to introduce André Castro and Álvaro Djaló before his side were awarded a penalty in the 57th minute, Fabiano pouncing on a loose ball in the box where he was fouled by Amaro.

Bruno Varela did his best to unsettle Ricardo Horta and it appeared to do the trick, Braga’s talisman missing the target which brought the Guimarães supporters back to life.

Moreno completely lost his mind and was sent off, getting excessively aggressive and in the faces of the referee and fourth official, his brain explosion likely to result in the unofficial manager spending some time away from the dugout.

Braga turned up the heat and started to create chances, André Horta’s free kick finding VItinha who couldn’t direct his header on target. The striker had another chance with his shot blocked following a fast break.

Diego Lainez replaced Vitinha with five minutes remaining, Braga’s frustrations boiling over with Fabiano getting involved in a heated confrontation with and Rúben Lameiras.

The five minutes of added time dragged on due to injuries which turned out to be favourable for the hosts. In the eighth minute of five added on, Ricardo Horta’s free kick found he danger area where Vítor Tormena headed past Varela.

Braga eventually get it done 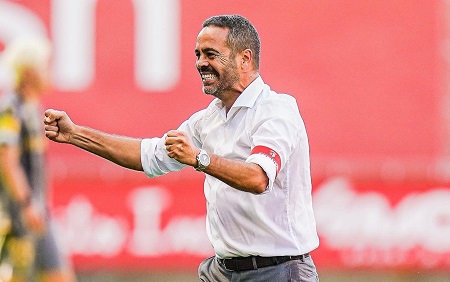 Braga made it four straight wins without conceding a goal, a fantastic run of form after the opening day 3-3 draw against Sporting CP. Betting on Braga this season could be as profitable as your agen slot online chances.

They left it late, but it could have been a different story had Freitas been sent off in the first half and Ricardo Horta converted his penalty.

Regardless, Braga struggled to break down Guimarães largely due to Bamba’s presence in central defence and the guile of André André in midfield.

We might have seen some of Artur Jorge’s managerial inexperience on display. Despite making two like for like substitutions on the hour mark, he didn’t try and do anything tactically until going for broke in the 76th minute when he introduced Abel Ruiz for André Horta.

None of that will matter in Braga where they will be celebrating long into the night, their attention soon turning to their Europa League group stage opener in Malmö on Thursday.

Much improved from Guimarães

Guimarães came to Braga ready to fight, closing the ball down quickly and getting players back in transition. Moreno’s decision to change the tactics and play with a back three paid dividends.

20-year-old Ibrahima Bamba was impressive in the heart of defence and Mamadou Tounkara did well after coming off the bench at half-time to make his top flight debut.

André André recently spent six months on loan at Al-Ittihad Club and his return to Guimarães couldn’t have come at a better time for Moreno.

The 33-year-old captain showed plenty of his experience and class in Braga, frequently instigating attacks and working well with Tiago Silva in the centre of the pitch.

It was a slightly bizarre press conference from the visitors. Guimarães president Miguel Cardoso gave a lengthy statement with Moreno pacing around the room, his blood seemingly still boiling, the manager then taking the hot seat and delivering a multitude of tirades.