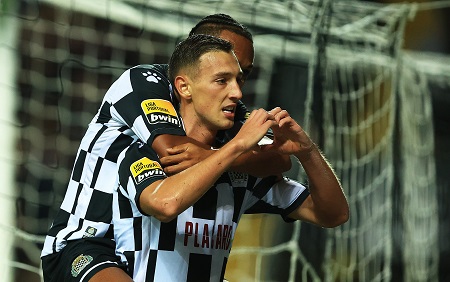 Boavista secured their third win of the season after beating Paços de Ferreira 1-0 at Estádio do Bessa XXI.

Robert Bozenik netted the winner in the 58th minute, opening his account for the Panthers after being teed up by the impressive Kenji Gorré.

Paços de Ferreira’s miserable start to the season continues, the visitors creating one shot on target as they slumped to a fifth straight defeart.

Boavista created the opening two opportunities in Porto, Robert Bozenik shooting into the side netting and Bruno Lourenço unable to connect cleanly after being picked out by Kenji Gorré.

Paços de Ferreira put the ball into the net in the 13th minute after Nigel Thomas’ cross wasn’t dealt with, the goal ruled out for a foul in the build up.

The Panthers had a great chance to open the scoring in the 18th minute after a loose touch from Jordan Holsgrove. Gorré broke clear and exchanged a 1-2 with Lourenço, his weak shot comfortably saved by Igor Vekic.

Nigel Thomas cut inside from the right wing and curled an effort wide but chances for the visitors were few and far between.

Boavista had the final two opportunities of the half, Gorré’s shot tipped wide by Vekic and Sebastián firing wide from distance.

It was an action packed start of the second half, Bozenik narrowly missing the target after some great link up play with Lourenço.

Holsgrove then saw his shot blocked after being teed up by Koffi. The visitors thought they had taken the lead when Thomas’ attempted cross went straight into the top corner.

Their celebrations were cut short however, referee Cláudio Pereira checking the touchline monitor and awarding Boavista a free kick for an incident that happened at the opposite end of the pitch minutes earlier.

It proved to be a turning point in the game with Boavista taking the lead in the 58th minute. Rodrigo Abascal won the ball, releasing Gorré who surged forward and laid the ball to Bozenik who fired into the roof of the net from a tight angle.

Matchoi Djaló missed the target with a long range free kick but there was no way back for César Peixoto’s side despite introducing Kayky and Arthur Sale. 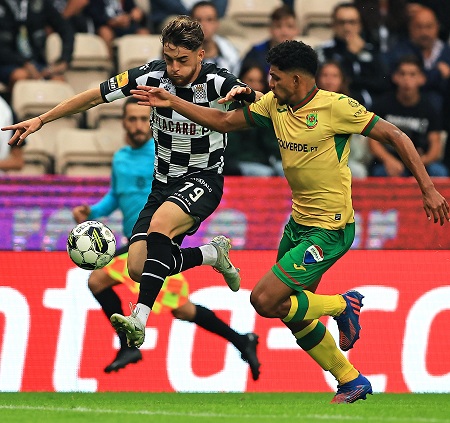 Rodrigo Abascal had a strong game in central defence as he continues to build a relationship with Vincent Sasso. Ricardo Mangas is being integrated back into the team after a season on loan at Bordeaux, he will be an option on the left side with 21-year-old Pedro Malheiro first choice right back.

Sebastian Pérez and Gaius Makouta are locked down in central midfield with Ibrahima Camará brought in from Moreirense before the transfer window closed.

Kenji Gorré was always the likeliest to open the door against Paços de Ferreira, continually creating havoc down the left wing, going close to opening the scoring in the first half and providing the assist for Bozeník.

Yusupha Njie had a great start to the season, scoring in Boavista's opening two games before picking up an injury. He will return to replace Bruno Lourenço and make the team stronger up front.

Róbert Bozeník was making his first start at home after his loan move from Feyenoord, the Slovakian striker narrowly missing the target before scoring the winning goal.

With striker Adalberto Peñaranda another player brought in on deadline day, Petit has depth and competition for places which should hold the Panthers in good stead for the remainder of the season.

César Peixoto has attempted to fix a leaking defence by implementing a five-man defence when out of possession, his wing-backs breaking forward when they have the ball.

Centre back Erick Ferigra made his debut and should improve, the 42-year-old manager hoping the Barcelona youth player can help solidify a defence that shows no signs of keeping a clean sheet.

N'Dri Philippe Koffi has scored their only two goals this season, both in the 3-2 defeat at Benfica, but he needs better service in order to build on that performance.

Midfielder Bastien Toma came off the bench in the 65th minute, another player making his debut after securing a loan move from Genk.

With Tiago Ilori, Luiz Carlos and Nico Gaitán to return from injury, there are some positives for Paços de Ferreira.

Regardless, time is running out for Peixoto who is clearly under pressure. He couldn’t have imagined a worse start to the season, his side losing five straight and unable to score in four of those defeats.

During the week he said "We want a victory quickly and everything will change, anxiety will be lost and everything will return to normal," but it’s still hard to see how or against whom they are going to pick up enough points to get off the bottom of the table.

By Matthew Marshall at Estádio do Bessa XXI