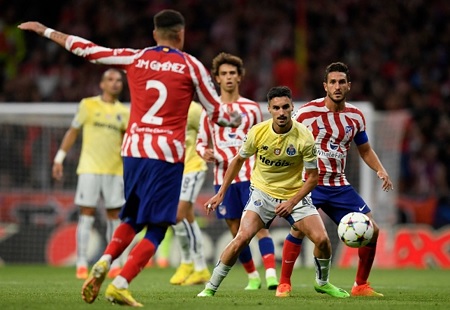 Atlético Madrid snatched a 2-1 victory against Porto in an incredible Champions League match. The opening 90 minutes were largely uneventful before a ridiculous 11 minutes of added time where all three goals were scored.

Mario Hermoso’s deflected shot sailed over Diogo Costa before the defender gave away a penalty that Mateus Uribe squeezed past Jan Oblak. The visiting supporters were celebrating a well earned point but there was more drama to come.

In the 11th minute of nine added on with the last kick of the game from a corner, an unmarked Antoine Griezmann headed home at the back post with Atlético supporters celebrating their first home win in the Champions League since October 2020.

Yannick Carrasco fired a free kick onto the roof of the net after Mateus Uribe had taken down João Félix, but chances were proving hard to come by in Madrid.

Otávio frequently moved infield to try and create overloads for Sérgio Conceição’s side. Galeno was finding plenty of open space down the left wing, breaking clear before seeing his shot blocked.

The hosts created the best chance of the half in the 37th minute. Yannick Carrasco’s cross fell to Koke, Atlético’s captain shooting straight at Diogo Costa.

Galeno continued to look most likely to break through, the winger going on another mazy run with his shot deflected wide.

Simeone shakes it up

Koke side footed home off the post but celebrations were cut short due to offside. The positivity wouldn't last for the home crowd as Porto got on top, Stephen Eustaquio’s long range strike tipped wide by Jan Oblak.

Antoine Griezmann replaced Ñíguez in the 61st minute with Conceição bringing João Mário on for Pepê at right-back.

The chances kept coming for the Dragons. Eustaquio shot wide, Mário’s shot was saved after receving a great pass from Mehdi Taremi and Otávio saw his effort blocked.

Mario Hermoso replaced Álvaro Morata but Simeone was unable to turn the tide, the home crowd noticeably restless after Porto were unable to convert a fast break in the 70th minute.

Taremi was booked for a foul on José Giménez before Ángel Correa replaced Félix, much to the disapproval of the home supporters.

Hermoso accidentally kneed Otávio in the back, the Porto playmaker down for a number of minutes before being stretchered off the pitch. He was replaced by Bruno Costa, Evanison making way for Toni Martínez up front.

Taremi’s night came to an early conclusion in the 82nd minute when he received a second yellow card, clearly diving into Axel Witsel in an embarrassing attempt to win a penalty. David Carmo then made an important challenge on Correa as the Dragons looked to hold on for a point.

The game appeared to be heading towards a goalless draw before nine minutes of added time was awarded. Nobody could have predicted what was to come. 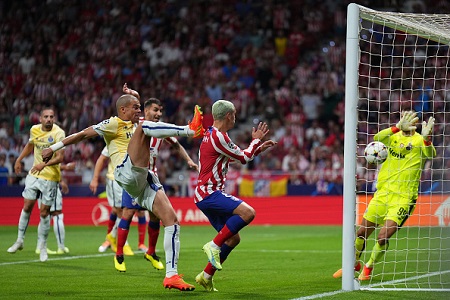 One minute in and Atlético had taken the lead. Correa found Hermoso, the defender getting around Bruno Costa and firing a shot that took a huge deflection and looped over a helpless Diogo Costa.

There was more drama in store in Madrid when Hermoso went from hero to villain. Zanusi’s long throw fell to Hermoso inexplicably slapped the ball away, referee Szymon Marciniak with an easy decision to award a penalty.

Mateus Uribe stepped up and squeezed it past Oblak, the keeper diving the right way but unable to get a strong enough hand on the ball to divert it wide.

There was more madness to come in the 111th minute with the last kick of the game. Atlético won a corner, Witsel nodding the ball towards the back post by where an unmarked Griezmann headed home despite last ditched attempts by Pepe and Diogo Costa.

Atlético had been poor in Madrid. They frequently gave the ball away, their combination play largely ineffective with players looking lost and none of Diego Simenoe’s attempts to rectify the situation with substitutes having much effect.

João Félix was looking most likely to unlock the door with Pepê Aquino and João Mário booked for trying to stop the tricky attacker. The young Portuguese forward is a crowd favourite in Madrid and they voiced their displeasure when he was replaced by Ángel Correa.

In the end the Atlético supporters went home happy, finally able to celebrate a home win in the Champions League since defeating Salzburg 3-2 in September 2020, a run of eight games that resulted in five draws and three defeats.

Porto were looking certain to leave Madrid with a another 0-0 draw which they achieved last season. Pepe had been strong in central defence with midfielders Mateus Uribe and Stephen Eustaquio providing effective cover.

The Dragons had created chances, were dangerous on the break and Galeno had caused problems for Nahuel Molina and José Giménez during the first half.

Sérgio Conceição’s side were given a gift when Hermoso handled the ball and Uribe equalised from the penalty spot, but football can be both a beautiful and cruel game. In the end they can only have themselves to blame for leaving Griezmann unmarked.

Leaving stadiums early can be justified in a very few number of cases. The rest of the time it’s people simply giving up on their team.

Werder Bremen recently came back from 2-0 down in the 89th minute to win 3-2 in Dortmund. I saw it in Braga on Saturday before Vítor Tormena scored the winning goal against Guimarães with the last kick of the game.

Many Atlético 'supporters' gave up on their team tonight, thinking the game was certain to end in a 0-0 draw despite it being obvious that added time would be significant.

How it must have felt when they heard the roar inside the stadium, somehow consoling themselves that watching it on their mobile phones or watching the replays when they got home was a justified substitute. What a waste.

Porto are so frustrating to watch. There were 9 Porto players to Atletico's 6 in the box on that final corner of the game. Is it that hard to put a man on each player?

Can't disagree SupremoGino. Sérgio Conceição obviously complained about the amount of added time when all his team had to do was mark Griezmann and leave Madrid with a point.

That's why I don't really bother or worry about what managers say,...

Can't disagree SupremoGino. Sérgio Conceição obviously complained about the amount of added time when all his team had to do was mark Griezmann and leave Madrid with a point.

That's why I don't really bother or worry about what managers say, especially after defeats. It's normally all deflection and excuses.

I am so extremely fed of Simeone and the shitty brand of football Atletico "plays". Really - each time I see this guy celebrating I fight against vomiting. And what makes it even worse is, that this is the weakest Atletico side I have seen in...

I am so extremely fed of Simeone and the shitty brand of football Atletico "plays". Really - each time I see this guy celebrating I fight against vomiting. And what makes it even worse is, that this is the weakest Atletico side I have seen in years. Porto was absolutely frustrating. Even though last season the result was a 0:0, last evenings match was like a déja-vu. Starting with the left foot into the campaign is something that Porto can't afford, even though the group isn't very strong with Brügge and Leverkusen being the other opponents. I really hope it isn't Atletico again to kick Porto out of the UCL. And I hope Otavio will recover soon. He's a player "a Porto" and we really need him. Even more since all midfield creativity has gone with Vitinha and Veira.

It seemed plenty of Atletico Madrid supporters are also growing tired of Simeone, something unimaginable not that long ago. With the players he has, they should be a much better team.

Not sure why he decided to go with three at the back, doesn't...

It seemed plenty of Atletico Madrid supporters are also growing tired of Simeone, something unimaginable not that long ago. With the players he has, they should be a much better team.

Not sure why he decided to go with three at the back, doesn't appear to be working from what I saw in Madrid.

They are unwatchable, check the stats they managed all of 3 shots in a Champions League match, truly pathetic.