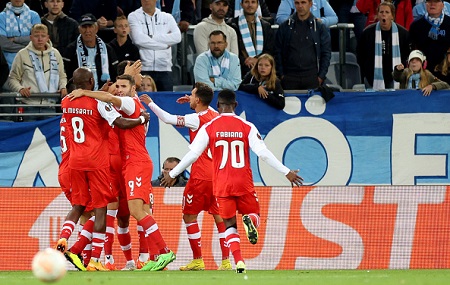 Braga beat Malmö 2-0 to get their Europa League campaign off to a winning start. It was a professional performance in cold, windy and wet conditions in Sweden.

A well worked corner routine saw Bruno Rodrigues open the scoring in the 30th minute. Nuno Sequeira won a penalty in the second half, Ricardo Horta dispatching the spot kick with the Swedish champions unable to respond.

It was the fifth consecutive victory for Artur Jorge's side who have scored 17 goals in that run without conceding.

Braga fired the first warning shot in the 13th minute after Diego Lainez went on a surging run and was taken down by Erdal Rakip. Ricardo Horta stepped up and arrowed his free kick over the bar.

Abel Ruiz put the ball into the net in the 19th minute after Vitinha charged down a clearance, the Spanish striker denied after being ruled offside. Fabiano’s cross was then met by Vitinha whose header was tipped off the bar by Ismael Diawara.

Fabiano gave away a clumsy foul in the 26th minute which provided the hosts with their first opportunity. Anders Christiansen’s free kick fell kindly for Dennis Hadzikadunic who volleyed narrowly wide.

Four minutes later Braga took the lead as both centre backs combined to convert a clever corner routine. Paulo Oliveira got away from his marker and headed the ball towards the back post where Bruno Rodrigues back heeled the ball into the net.

The chances kept coming for the Warriors, Andre Horta winning possession and feeding his brother Ricardo who who stepped inside and forced a fine save from Diawara.

Mohamed Buya Turay had a chance but Matheus was up to the task. Abel Ruiz had the final opportunity of the half when he pounced on a loose pass from Oscar Lewicki, unable to test Diawara with his shot deflected wide.

Conditions go from bad to worse

Age Hareide made two changes at the break as the rain came down to accompany the holwing wind and chilling cold. Sergio Peña and Ola Toivonen replaced Oscar Lewicki and Isaac Kiese Thelin.

Christiansen continued to be Malmö’s most potent attacking threat, his low drive easily snuffed out by Matheus.

Vitinha squeezed the ball into the net in the 47th minute after Ricardo Horta’s shot was tipped off the post, once again a Braga goal ruled out after Horta was marginally offside.

Álvaro Djaló replaced Vitinha in the 61st minute as the Warriors searched for the go-ahead goal. It duly came in the 70th minute after Peña fouled Sequeira in the box, a penalty awarded after a lengthy delay, Ricardo Horta stepping up and sending Diawara the wrong way.

Christensen had a great chance to reduce the deficit couldn’t keep his volley down. It proved to be Malmö’s final chance, Braga holding the Swedes at arm’s reach for the remainder of the contest and closing the game out with ease. 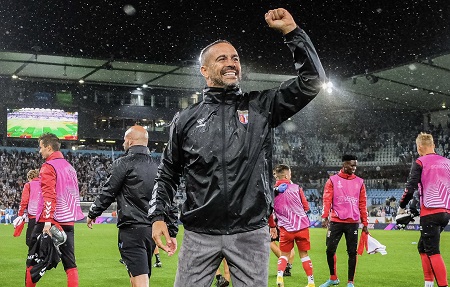 Braga were simply too good and made it count by earning a comfortable three points in ugly and uncomfortable conditions. They managed to limit Anders Christiansen’s impact on the game, Malmö’s captain their key player and extremely influential with and without the ball.

The Swedish champions were playing their first match under Age Hareide and it showed, the former Norway and Denmark boss with limited time to prepare after replacing caretaker manager Andreas Georgson just two days ago.

Alongside Oliveira and Rodrigues making their first appearances, Lainez and Ruiz got their first starts of the season. Uroš Račić came off the bench after sealing his loan move from Valencia while left back Cristián Borja got five minutes of action as he slowly gets reintegrated into the team.

Jorge will be delighted with a fifth straight win without conceding a goal, especially after conceding three goals in the opening day 3-3 draw against Sporting CP. He has a deep squad that are going to be required with the fixtures starting to pile up.

By Matthew Marshall at Eleda Stadion