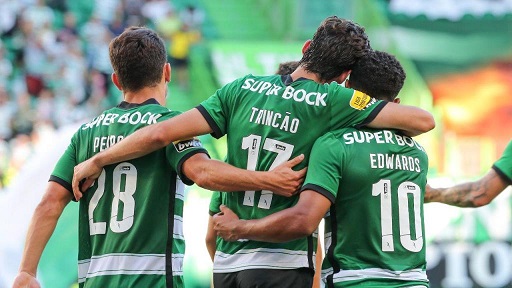 Three successive wins. Nine goals scored. None conceded. Sporting took another step towards putting their poor early season results behind them with a resounding win against high-flying Portimonense at Alvalade on a sunny Lisbon afternoon.

Two first-half Francisco Trincão goals put the Lions in charge and further strikes after the break from Pote and Nuno Santos will further boost Sporting’s confidence ahead of their Champions League encounter against Tottenham Hotspur on Tuesday.

Sporting coach Rúben Amorim had said changes would be made during a busy schedule, so it was little surprise to see Pedro Porro, Matheus Reis and Ugarte on the bench, while St. Juste was out injured. Ricardo Esgaio, Luís Neto, Nuno Santos and Rochinha made the starting line-up.

Portimonense were looking to continue a sensational run of form with former Sporting coach Paulo Sérgio having expertly guided the Algarve team to four straight victories and fourth place in the table.

But the hosts got off to a perfect start by taking the lead in the 7th minute. Portimonense could not get a corner clear and when the ball fell to the edge of the box Trincão hit a firm first-time half volley towards goal, with a deflection off Pedrão taking the ball past goalkeeper Nakamura and into the net.

Sporting’s mobile front three of Edwards, Trincão and Rochinha were combining well, with Pedro Gonçalves pulling the strings further back, as Amorim continues his attacking game plan of playing without a fixed number nine.

Trincão, Pote and Edwards all tried their luck from distance. Paulo Sérgio did not like what he was seeing and made an early change, Róchez coming on for Gonçalo Costa, and the visitors improved as Sporting lost their early impetus.

However, a mistake from Róchez saw Sporting double their lead just before the break. The substitute lost the ball, Edwards showing excellent awareness to immediately play in Rochinha, whose early cross left Trincão with just the goalkeeper to beat 15 yards from goal. He duly applied a calm left-footed finish. Sporting 2-0 Portimonense.

Edwards then brought a sprawling save out of Nakamura.

The first 15 minutes of the second half was a stop-start affair, with injuries and substitutions preventing the game from flowing. Sporting will be worried that both Gonçalo Inácio and Neto were forced off the pitch. With St. Juste already injured, the Lions may be left short in central defence for the Spurs clash.

On 65 minutes captain Sebastián Coates went close from a corner, heading narrowly over the bar, and Sporting were even closer to scoring soon afterwards. Trincão was set up by a clever Paulinho back-heel but was denied a hat-trick by a terrific headed clearance off the line by Pedrão.

Sporting fans were soon celebrating again though, Pedro Porro’s pinpoint cross headed into the net by Pote, with the aid of a big deflection once again off the unlucky Pedrão.

The hosts had found their rhythm again and made it 4-0 with a tremendous team goal. Trincão played in Pote, who drifted past his marker and played a diagonal pass to Nuno Santos who thudded a first-time low angled drive into the net.

Rochéz missed a late chance of a consolation, swishing his boot at thin air when ghosting behind the Sporting defence. Portimonense leave the capital having been brought back down the earth with a bump.

As for Sporting, the mood in the camp will be very different from a couple of weeks ago as Amorim prepares his squad for a big Champions League night.

by Tom Kundert at the José Alvalade stadium

Or maybe....just maybe, Liga Nos is a highly talented league full of players who are stars or regulars for their own national teams, and full of high quality football.