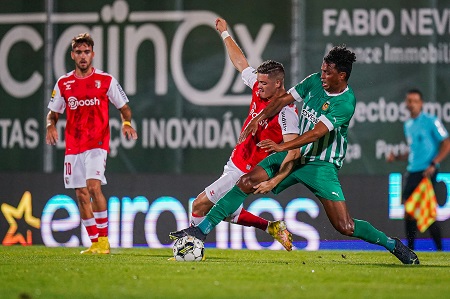 Braga suffered a late scare in Vila do Conde, holding on to secure a 3-2 victory against Rio Ave to make it six straight wins.

Goals to Al Musrati and Iuri Medeiros established a 2-0 half-time lead and the three points seemed assured when Ricardo Horta made it 3-0 in the 69th minute.

The Vilacondenses produced a late rally with Emmanuel Boateng and Aziz Yakubu scoring in the final 10 minutes, setting up a grandstand finish but the hosts leaving their fightback too late.

It was a confident start from Rio Ave with Aziz and Fábio Ronaldo keeping Braga’s defenders on their toes. They couldn't sustain the pressure as the Warriors weathered the early storm and began to dominate.

It worked a treat with Braga frequently winning possession in dangerous positions. Medeiros got past Miguel Nóbrega, cutting the ball back to Ricardo Horta who looked certain to score before Jhonatan made a sensational save.

Braga took the lead from the resulting corner in the 11th minute. It was another clever set piece routine, the Horta brothers combining before Ricardo hung the ball in the air and Al Musrati powered his header past Jhonatan.

Braga survived a penalty scare after Bruno Rodrigues got tangled up with Fábio Ronaldo, the home crowd just calming down when their side conceded again in the 24th minute. Rio Ave failed to clear a cross, Medeiros’ shot saved by Jhonatan before he reacted fastest and squeezed it under the keepers legs.

Joca couldn’t direct his drive on target with Matheus enjoying a comfortable evening between the sticks. Rio Ave were far too passive with their press, allowing Braga a lot of time on the ball.

Luís Freire made a change at the break, Paulo Vitor and João Ferreira replacing Renato Pantalon and Costinha which saw a reshuffle in defence.

Chances were proving hard to come by for both teams, Aziz firing a weak shot at Matheus in the 58th minute

Artur Jorge made two changes in the 59th minute when André Horta and Vitinha made way for Uroš Račić and Álvaro Djaló. Freire immediately countered with Miguel Baeza and Emmanuel Boateng replacing Joca and Fábio Ronaldo.

The substitutions favoured Braga who got back on top and made it 3-0 in the 69th minute. Amine Oudrhiri dawdled on the ball and was robbed by Djaló, the 23-year-old trickster feeding Ricardo Horta who produced a cool finish past Jhonatan.

The visitors continued to turn on the style, Horta’s backheel presenting Banza with a great chance that forced another save from the increasingly busy Jhonatan. It was Banza’s final involvement in the game, replaced by Abel Ruiz.

Rio Ave leave it too late

Rio Ave finally got on the score sheet in the 81st minute when Aziz’s cross was turned home by Boateng.

Jorge made his final two substitutions to try and protect the two goal advantage, Cristián Borja and André Castro replacing Nuno Sequeira and Medeiros. It had a negative effect however, Djaló showing little interest in defending and Castro too slow to do anything about Vitor.

Braga’s right edge was being brutally exposed and it was down that avenue where Rio Ave clawed another goal back in the 87th minute. Vitor surged clear once again and played a defence splitting pass that found Aziz, the Ghanaian striker rounding Matheus and finding the net.

Boateng’s shot from a tight angle was saved but it proved to be Rio Ave’s last chance, Braga dominating added time which was primarily played in the Vilacondenses half.