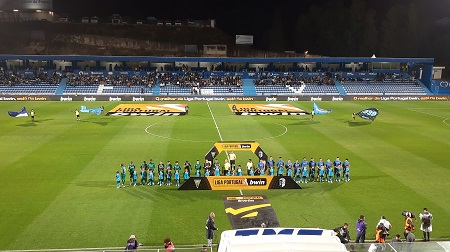 Erison Danilo celebated his first start in the Primeira Liga by firing Estoril to a 1-0 victory in Vizela.

Milutin Osmajic missed a chance the equalise after being given a soft penalty, the hosts' task made tougher when Tomás Silva was sent off in the 73rd minute.

Vizela had a great chance to open the scoring in the 13th minute, Raphael Guzzo’s cross headed to Kiko Bondoso, who blasted over the bar from close range. Tomás Silva was next to have an opportunity, the right back finding himself in the box where he forced a save from Dani Figueira.

Tomás Silva was booked for a high shot on Tiago Gouveia, Estoril winning a corner from which they took the lead in the 28th minute. It was a simple goal, Joãozinho’s delivery finding Erison whose looping header sailed over Fabijan Buntic, a poor goal to concede from the Croatian goalkeeper.

Vizela were given a golden chance to equalise when referee Manuel Mota gave them a soft penalty. Milutin Osmajic scuffed his shot and went down after minor contact with Pedro Álvaro, the Croatian striker stepping up and slamming the spot kick off the top of the bar.

Both managers changed their midfields at the break, Pacheco replacing Samu with Claudemir and Veríssimo bringing on Mor Ndiaye for Loreintz Rosier.

Vizela were dominating possession and went close to equalizing in the 58th minute. Tomás Silva’s cross was met by Osmajic at the back post, he did well to direct the ball on target but couldn’t beat Figueira. 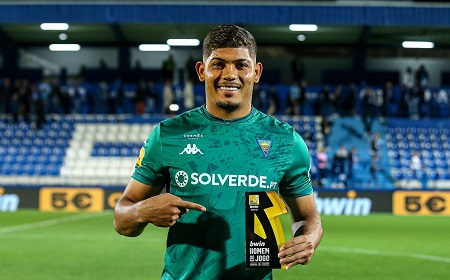 Gouveia fired high and wide in a rare foray forward from Nélson Veríssimo’s side, the manager then replacing Erison with Alejandro Marqués.

Pacheco made two substitutions in the 65th minute with Alex Méndez and Osmajic making way for Diego Rosa and Alexander Schmidt. Vizela’s head coach was cutting a frustrated figure on the touchline with his side giving him more to be irritated about in the 71st minute.

It was a howler from Figueira, giving the ball away inside his own box with the ball deflecting off Schimidt to Bondoso who slipped as he shot, the ball sailing way over the bar.

Bondoso had another chance less than 60 second later that he dragged wide. If Pacheco wasn’t already annoyed enough, he then saw Silva receive a second yellow card in the 73rd minute when he fell over Joãozinho and was booked for diving.

Tempers started to flare with a number of Estoril players going down injured and wasting time.

Vizela won a succession of corners, Guzzo’s backheel not generating enough power before nine minutes of added time was awarded. The hosts poured forward and continued to create chances with 10 men.

Claudemir’s long throw falling to Schmidt but the Austrian striker unable to beat Figueira who made a huge save to preserve Estoril’s lead. Kiki had the last change of the game, finding himself free before blasting over the bar.

By Matthew Marshall at Estádio do Vizela