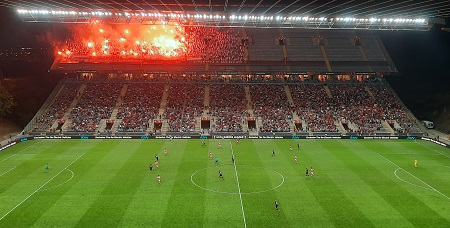 Braga preserved top spot in Group D after a hard fought 1-0 win against Union Berlin in the Europa League.

A tight game was predicted at the Quarry and that’s what eventuated, Diogo Leite hitting the post for the visitors before Simon Banza’s shot was saved on the stroke of half time.

The breakthrough came in the 77th minute when Frederik Rönnow couldn’t clear André Horta’s swerving shot, Vitinha reacting fastest and firing the ball into the net.

It was the seventh straight victory for Artur Jorge’s side, 21 goals scored in that run with just two conceded.

Union stared with intensity and put Braga under early pressure. Jordan Siebatcheu glanced a header wide and Matheus came off his line to save an effort from Sheraldo Becker.

The German club went close to taking the lead in the 15th minute when Diogo Leite headed Tymoteusz Puchacz’s corner off the outside of the post.

Braga got into the game with Simon Banza’s shot blocked and Ricardo Horta unable to keep his volley down.

András Schäfer was booked for a nasty challenge on Uroš Račić as Artur Jorge’s side continued their fight back. Álvaro Djaló missed the target and Horta’s shot was deflected wide, Braga creating their best opportunity in added time when Banza forced a save from Frederik Rönnow.

Chances hard to come by

Union went close at the start of the second half when Siebatcheu was unable to get his shot away, the ball falling to Julian Ryerson who shot narrowly wide.

The substitutions started to flow from both managers, Jorge making the first move in the 61st minute with André Horta and Iuri Medeiros replacing Uroš Račić and Álvaro Djaló.

Urs Fischer brought on Christopher Trimmel and Genki Haraguchi for Tymoteusz Puchacz and András Schäfer before Simon Banza made way for Abel Ruiz. 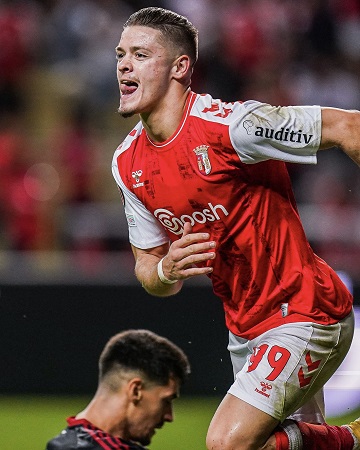 The key moment in the match came in the 77th minute when Braga scored the decisive goal. André Horta’s low swerving shot was palmed away by Rönnow, Vitinha reacting fastest and finding the net from a tight angle.

It was another demonstration of Vitinha’s tremendous awareness as the young Portuguese striker set Braga on their way to yet another triumph. Betting on a Braga win lately is as equally lucrative as visiting online casinos and bookmakers who offer numerous bonuses such as roulette no deposit bonus or World Cup free bets.

From real money roulette apps to World Cup odds, there is nothing you will not find at these establishments.

Fabinho’s long ball gave the striker another chance minutes later but Rönnow was up to the task.

Urs Fischer made a triple switch in the 82nd minute and switched to a 4-4-2 when Tim Skarke, Jamie Leweling and Kevin Behrens replaced Robin Knoche, Janik Haberer and Sheraldo Becker.

Vitinha received a standing ovation when he made way for André Castro in the 86th minute, Braga holding on under some late pressure to secure a vital win against the Bundesliga leaders.

Benfica’s 12 match winning run is receiving most of the headlines in Portugal, but Braga have now won seven straight with 21 goals scored and just two conceded.

Jorge went for more solidity in midfield against Union with Uroš Račić starting ahead of André Horta. Paulo Oliveira replaced Bruno Rodrigues in central defence with Álvaro Djaló earning his first start of the season, replacing Iuri Medeiros on the right wing.

It was an interesting tactical battle against Urs Fischer’s 3-5-2, Union no longer a team flying under the radar after qualifying for their second consecutive European group stage and leading the Bundesliga after six games played.

It was always likely to be a tight game decided by a moment of magic or a mistake.

Battle on the pitch and in the stands

Union Berlin supporters brought it to Braga, around 2,600 making the journey to Portugal with 1,500 taking advantage of five charter planes organised by the club.

They made a lot of noise to start the match, Braga supporters doing their best to drown them out but ultimately unsuccessful.

The visitors had a flare party at the start of the second half which was accompanied by some projectiles being thrown at security guards, but overall it was all peaceful and done with good intentions.

By Matthew Marshall at the Quarry

Not bad considering they are sitting first in the Bundesliga table, early days but nice to see.

Robert Martins
There are no comments posted here yet