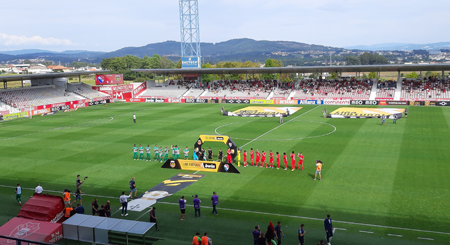 Gil Vicente scored two late goals in Barcelos to overturn a 2-0 deficit and earn a thrilling 2-2 draw against Rio Ave.

Guga gave the visitors the lead on the stroke of half-time before Aziz Yakubu finished a slick counterattack in the 71st minute.

Fran Navarro lobbed Jhonatan in the 80th minute before Guga was sent off to set up a grandstand finish. Murilo de Souza was the hero deep into added time, the ball sitting perfectly for the Brazilian who smashed it into the net.

It was a cagey start with the first chance falling to Mizuki Arai in the 15th minute, his shot saved from a tight angle. Fran Navarro was next to have an opportunity, his effort too close to Jhonatan.

Paulo Vitor tried his luck from distance but Rio Ave were getting nowhere near testing Andrew.

Juan Boselli had a great chance to put Gil Vicente ahead in the 29th minute but the Uruguayan winger was unable to keep his shot down.

Vitor went on rare run forward for the visitors but decided not to release Emmanuel Boateng. Aderllan Santos was then involved in a collision which saw the 33-year-old centre back replaced by Patrick William.

Just when it seemed no goals would be scored in the first half, Gil Vicente seemed intent on conceding one. They gave away fouls in dangerous positions, conceded a needless corner and frequently gifted the visitors possession in their defensive third.

Rio Ave made them pay when Miguel Baeza’s cross to the back post was met by Guga, the captain executing a lovely left footed volley into the roof of the net.

Hosts press for an equaliser

Ivo Vieira made a change at the break with Kevin Villodres replacing Boselli, his side beginning the second half by dominating possession without creating chances.

Luís Freire made his first change in the 57th minute with Emmanuel Boateng making way for Fábio Ronaldo.

With his side firmly under the pump, Freire made a triple switch in the 67th minute when Andreas Samaris, Vítor Gomes and Ukra replaced Josué Sá, Amine Oudrhiri and Vitor.

Goal against the run of play

Just when it seemed an equaliser was inevitable, the Gilistas were hit on the counterattack. Costinha sent Ukra through a huge hole in Rio Ave’s defence, the winger drawing Andrew and laying the ball into the path of Aziz who bagged his fifth goal of the season.

The comeback is on

Vieira introduced Élder Santana for Kanya Fujimoto before his side got back into the game in the 80th minute. A great ball over the top by Matheus Bueno released Navarro, the Spanish striker taking advantage of Jhonatan coming off his line with a luscious lob that bounced into an empty net.

The stage was set for a grandstand finish which looked even more likely when Guga was sent off after picking up his second booking in the space of eight minutes.

Gil Vicente piled on the pressure, Vieira’s last throw of the dice bringing on Giorgi Aburjania for Danilo Veiga.

Seven minutes of added time were awarded which started with four yellow cards, one of which was given to Ronaldo who was unable to get back onto the pitch when his side conceded the equaliser.

Aburjania’s free kick fell perfectly for Murilo de Souza who pounded the ball into the back of the net, the Brazilian understandably ecstatic to score a vital goal in his first appearance of the season.