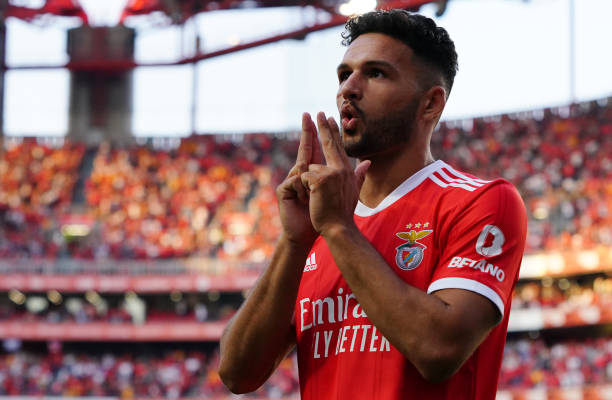 Benfica have increased their lead at the top of the Primeira Liga table prior to Sporting de Braga’s clash against Vizela, going five points clear with a 5-0 goal-glut at home to Marítimo.

The Eagles took advantage of slip-ups from bitter rivals FC Porto and Sporting to add to the distance between themselves and the chasers, who trail by five and 11 points respectively after Benfica’s Gonçalo Ramos-led triumph against Marítimo.

Benfica’s serene Sunday was warmed up by Arouca’s encounter with Vitória at home, leaving the hosts with a bitter taste in their mouths following a 102nd minute equaliser from spot-kick-taking Rúben Lameiras.

Elsewhere, Casa Pia prolonged their positive start to the season with their fourth win in seven games, making Famalicão their latest victims in a 1-0 victory in front of their home support.

Excitement ripped across the Estádio da Luz as Benfica, yet to drop points this season, aimed to increase their lead at the top of the Primeira Liga table to five points against last-placed and winless Marítimo.

Rafa Silva got the project in motion with a 28th minute finish that could’ve been replicated by both João Mário and Ramos, failing to double the Eagles’ lead before half-time.

It was a different story in the second period, however, with Ramos requiring just two minutes to make amends with a cute backheel finish, courtesy of an Alexander Bah assist. Benfica almost had a third through the young António Silva, striking the post inside the box before Ramos, in the 64th minute, made it 3-0 with a lifted effort against Miguel Silva.

Roger Schmidt’s side weren’t done there, taking advantage of a loss-of-possession deep in Marítimo’s half to make it 4-0 via David Neres before Julian Draxler, in his first appearance at the Luz, made it 5-0.

At the hands of Schmidt’s biggest win for the Lisbon giants so far, Marítimo remain the only side in the league yet to pick up a point, this season.

In a mid-table clash, for now, Vitória had their eyes firmly set on a triumph away from home versus Arouca that could set them past the likes of Estoril and stumbling Sporting, sitting just a point ahead of the Vimarenses.

The two outfits exchanged strikes from range and in the 33rd minute, André Bukia made one count on his left foot, squeezing a shot past a disappointed Bruno Varela to give Arouca the lead going into the interval.

Vitória equalised via Anderson Silva in the 57th minute, just a few minutes before Rafa Mújica came inches away from converting a one-on-one at the other end for the hosts.

In the 70th minute, Arouca again had their noses in front and it was largely thanks to Matheus Quaresma, leaving Varela staring at yet another long-range shot stopped only by the back of the net. But meanwhile the former Benfica goalkeeper’s performance may have been a source of natural discontent, his next action kept Antony from crowning a solo run with a killer goal.

Vitória were on hand to punish Arouca once more, offering a scare with a disallowed Jota goal before an 11th hour Lameiras penalty made it 2-2 just before the final whistle.

Once the talk of the town themselves, Famalicão came up against well-placed Casa Pia in dire need of taking off this season after registering just one win in six.

The hosts came close once more just as the half sought to conclude itself, with the lively Takahiro Kunimoto incapable of keeping a looping pass into his path on target from a dangerous volley.

Casa Pia grabbed the goal they so craved in the second period as Kunimoto, from a corner, delivered the goods for Léo Bolgado to divert in off his head. The defender’s goal made all the difference in win number four for Casa Pia, up to sixth in the league and leaving Famalicão just three points off the automatic drop-zone.

Great win! Enzo and Rafa were both superb. Happy to see Aursnes get his first start as well. He may not be a like-for-like replacement for either Florentino or Enzo in terms of style, but he's a solid all- around midfielder who does all of the...

Great win! Enzo and Rafa were both superb. Happy to see Aursnes get his first start as well. He may not be a like-for-like replacement for either Florentino or Enzo in terms of style, but he's a solid all- around midfielder who does all of the little things well.

Also loved seeing Draxler open up his account with an excellent goal - if he can stay fit and regain his form, we could be looking at one of the best players in the league.

Also gotta give some praise to Gonçalo Ramos. He gets a lot of slack for being wasteful which is certainly warranted, but it also has to be said that while he can be wasteful, the fact that he gets so many chances is a testament to his ability to make clever runs off the ball and be at the right place at the right time. If he avoids injuries and continues to play regularly I could definitely see him scoring 15+ league goals this season.

Looking forward to an October that will include two matches against PSG, a huge away match against Porto, and I believe the home game against Juventus as well. If we can make it out of next month with a comfortable lead in the campeonato and one foot in the UCL round of 16, I will be a very happy man.

Well it has been an absolutely sensational start to the season so far from Benfica. Not just winning games, but winning in style for the most part, playing positive and proactive football with the goals really being shared out across the team and...

Well it has been an absolutely sensational start to the season so far from Benfica. Not just winning games, but winning in style for the most part, playing positive and proactive football with the goals really being shared out across the team and everyone doing their bit nicely. I had mentioned quite a few times on this site for quite a few years already, how I had wanted Benfica to finally get a foreign coach with more of a winning mentality, after too many years of exclusively having only local Portuguese coaches. I had already been impressed with Schmidt years ago when he was in charge of Leverkusen, but at the start of last season when Benfica played PSV in the champions league play off, was when I decided he was the coach I wanted. We won that play off, but with a lot of luck as PSV was definitely the better team over the two games but just didn't put away the chances they created, but I was super impressed with how organized they were tactically and with the proactive football they played. Then towards the end of last season when I read that Benfica had secured Schmidt for this new season, I was really happy.

What I have really liked about Schmidt so far, apart from winning all the games, is how humble and grounded he is. In the press conferences he is so focused and never gets ahead of himself with anything, and never wants the attention on himself, total focus on getting results and getting the very best out of his players, nothing else. What a total contrast he has been to Jorge Jesus. Jesus, as we know, is the furthest thing from humble, bragging in the press conferences whenever we had good results and always wanting all the attention on himself. Schmidt just lets the results speak for themselves, and always shows humility and respect.... and that's a winner for you!

The team has been mostly excellent so far, everybody really....but special mentions for Goncalo Ramos (how on earth did he not make the Selecao squad???), Neres, Rafa, Joao Mario, Enzo Fernandez, Florentino Luis and Grimaldo, who have all been especially outstanding up to now. But I have to make a particular special mention right now to Antonio Silva! My goodness, what an amazing talent this kid is shaping up to be. I honestly don't know if I've ever seen an 18 year old center back with so much confidence and composure as this in all my years following this sport. Center back normally is the one position where it's difficult to be so good at such a young age, as it's a position where maturity is really needed above all, this kid's maturity and composure is simply sensational. A few weeks ago when Morato also got injured to make it 3 senior center backs all out injured, it seemed like we had a real center back crisis, but boy has Antonio Silva hit the ground running. Those 3 center backs are all going to struggle to get back into the 11 once they're recovered with this kid playing like this! Just like I said about Goncalo Ramos, it's incredible that Santos didn't pick him for the latest Selecao squad, even at just 18 he should be in that squad all day long!

So it's been an excellent start to the season from the team, but we have to stay grounded and focused. It's just the beginning of the season and there's still a long way to go, so we just have to take one match at a time and not get ahead of ourselves. I think this international break has come at a good time, as Schmidt's first choice 11 was playing virtually every game twice a week since the start of August. Many players will now get a much deserved rest, and hopefully we can continue with this good form after the break.

Great to see almost 60 thousand in the Luz today the players deserve the support. Bah really is impressing me Enzo as usual top notch all of our attackers involved... Joao Mario still needs to learn how to shoot thats worrying the chances he...

Great to see almost 60 thousand in the Luz today the players deserve the support. Bah really is impressing me Enzo as usual top notch all of our attackers involved... Joao Mario still needs to learn how to shoot thats worrying the chances he misses. But overall good way to end this grueling run of 13 matches. Tough game against Guimaraes coming up time to rest and get refocused. Also nice seeing Draxler score....
P.s Braga are in this title fight!

Future of Portugal Defence looks bright with Carmo,Inacio,Leite,Djalo,Toti Gomes,Bruno Rodrigues,Antonio Silva. This is the only position we lack to have depth.

Tarini Prasad Sahoo
There are no comments posted here yet