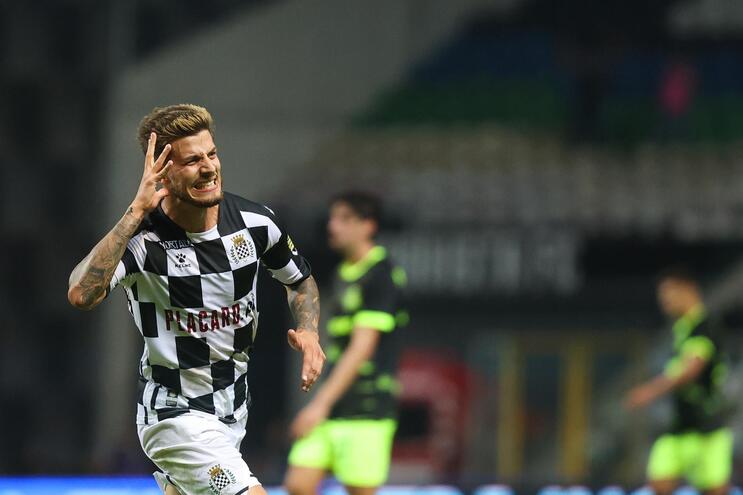 Liga Bwin football pauses for the season’s first international break as early pace-setters Benfica maintained their 100% start to the campaign by thrashing a beleaguered Marítimo, who prop up the table.

Braga have started similarly well, taking second place after a win over Vizela, and taking advantage of a Porto slip up in drawing at Estoril. Surprise packages Portimonense and Casa Pia both recorded victories to keep up terrific opening spells to 2022/23.

Another team arguably in the surprise package category is Boavista, who stunned a domestically struggling Sporting side, in part largely due to a goal of the season contender from PortuGOAL Figure of the Week Bruno Lourenço, the team nailing down fifth place in the process.

A former Benfica youth player, Bruno Lourenço got his first taste of Portuguese Primeira Liga action at the back end of the 2018/19 season with Aves, although in the year that followed his opportunities were limited, prompting a drop in divisions to a then-second tier Estoril, helping them to promotion in his first season with the club.

After being a semi regular in the XI in Estoril’s following campaign that saw them impressively finish 9th in Primeira Liga, Lourenço headed north this summer to Boavista on a free transfer. After having to sit out the first couple of games, as all of Boavista’s new signings had to do due to a club registration penalty, Lourenço is beginning to cement himself in the lineup of what has been a high-performing team.

Lourenço has generally operated from the right flank this season, allowing him to cut in on his favoured left foot, but he is also a versatile performer in that he can feature deeper and more centrally, as well as even as a false nine, which he was deployed as by his manager Petit during a recent defeat to Benfica.

For Saturday evening’s home encounter with Sporting Lourenço was deployed in his more natural right wing role, with Curaçao international Kenji Gorré lining up on the opposite side, both in support of Slovakian forward Róbert Boženik. Both teams went into the game on a run of consecutive wins, prompting plenty of promise of a spectacle at an atmospheric Estádio do Bessa.

Lourenço looked dangerous on a few occasions throughout the first half, and came agonisingly close to opening the scoring in the 28th minute, ghosting into the penalty area to meet Gorré’s fine cross but his point blank effort cannoned off the crossbar and to safety.

In first half stoppage time though Lourenço made up for his miss in sensational style. More excellent work on the left flank from Gorré preceded the ball looping loose into the air, and there was Lourenço to meet the ball with a sweet left foot volley that swirled in off the far post.

A strike that will take some beating in the Liga Bwin goal of the season award, reminiscent of Zinedine Zidane’s famous Champions League winning goal back in 2002.

Sporting somewhat inevitably fought back in the second half, levelling through Marcus Edwards but it was the home side that stole all three points late on with Lourenço taking centre stage once more. Boavista youngster Martim Tavares was adjudged to have been fouled by Ricardo Esgaio in the box, and Lourenço stepped up to calmly place his penalty kick high past Adán’s dive.

A huge win for Boavista that caps a terrific start to the season that sees them fifth in Liga Bwin after seven matches.

Lourenço’s form has been good so far this campaign but his game does need goals adding to it, evidenced by the fact that his brace means he has already equalled his total league tally from 2021/22 in the space of 90 minutes this weekend. His memorable first goal of the match indicates the confidence he is currently playing with though and there could be more to come from him and indeed this Boavista side.