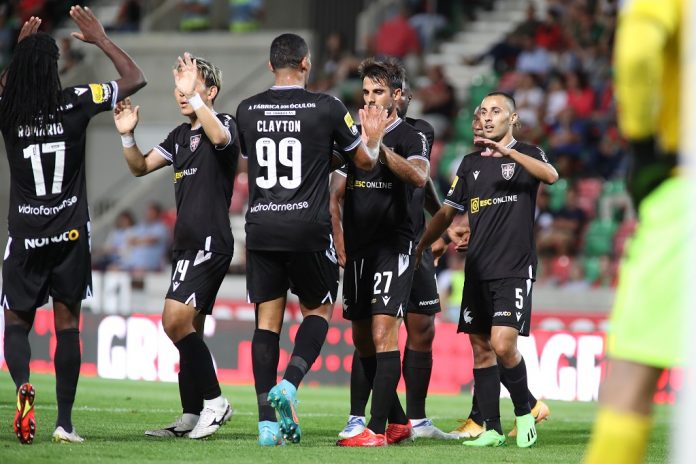 Marítimo remain rooted to the bottom of the Primeira Liga table without registering a single point after a controversial 71st minute penalty earned Casa Pia their fifth win of the season.

The hosts were hopeful of lifting themselves off the foot of the table in front of their home support and started well with Bruno Xadas’ opening goal, prior to Clayton’s equaliser.

Running at a ten-man Casa Pia in the second half, the hosts’ bemusement kicked in after Vitor Costa was also sent off in an anger-inducing penalty awarded to the visitors, later converted by Leonardo Lelo.

The full-back’s goal secured an important win for Casa Pia that takes the newly-promoted club all the way up to fourth, following Famalicão’s 4-0 hammering over Boavista and Portimonense’s inability to get anything from their trip to Vizela, losing 1-0.

In exciting form, Portimonense were expecting to prolong their good fortunes and sustain a run of results that had so far landed them a fourth-place spot, with Vizela marked as their next opponents.

Failure to clear their lines from a deep free-kick landed the team in Portimão into troubled waters, however, as Anderson, up for the set-piece, punished the visitors with the game’s first goal in the 14th minute.

Both goalkeepers, Fabijan Buntic and Kosuke Nakamura, traded crucial saves in the second period as the two sides battled for the next key goal in the game. Vizela edged themselves closer to a killer blow as late as the 89th minute via Kiko Bondoso, leading a 3-vs-1 counter-attack before being denied by Kosuke, in association with the woodwork.

The sole Anderson goal was enough to take the hosts over the line, registering Portimonense’s third league defeat of the season and compromising their lofty league position.

In light of Portimonense’s defeat, Boavista were presented with the opportunity to catapult themselves to fourth place with a win against the dwindling Famalicão, now back under the management of João Pedro Sousa following Rui Pedro Silva’s sacking.

The former Marco Silva number two was eased into the game with Ivo Rodrigues’ opener, glancing in a header in the 25th minute before bowing out at half-time to the tune of a 2-0 lead, supplemented by a José Rodríguez strike.

The Boavista humbling continued in the second half through Youssouf Zaydou’s powerful shot in the 52nd minute, stunning Petit’s men, set for defeat number three in the Primeira Liga. Gustavo Assunção rubber-stamped the thrashing with a rare headed goal for the creative midfielder late in the game, rounding up a huge 4-0 victory for Famalicão.

After the defeats handed to Portimonense and Boavista, Casa Pia were keen to not be the next high-flyers in line for a disappointing result, with the fixture list taking them to Madeira to face a Marítimo side yet to land a single point.

An upset was on the cards when Xadas, as early as the 11th minute, took aim at Casa Pia’s goal, beating Ricardo Batista with a somewhat tame effort to give Marítimo a rare lead. Unfortunately for the hosts, however, that one-goal advantage would last just seven minutes, with Clayton finishing from a Leonardo Lelo cross to make it 1-1.

Just before the break, Marítimo were given the chance to reclaim their lead after a foul inside the box from Nermin Zolotic, sending the Bosnian defender off after a second yellow card. Redemption was on the cards, however, as Batista, up against Xadas once more, kept things level with a save from the penalty spot.

The scripts were flipped in the second half after Vitor Costa was sent off in a rather controversial manner, without VAR’s intervention, and leaving Casa Pia with a golden opportunity to turn the game on its head. Trust fell on Lelo’s shoulders and the Portuguese wing-back did not disappoint, converting in the 71st minute. The spot-kick confirmed Casa Pia’s rise to fourth place, leaving Marítimo yet another week without the taste of a single point.