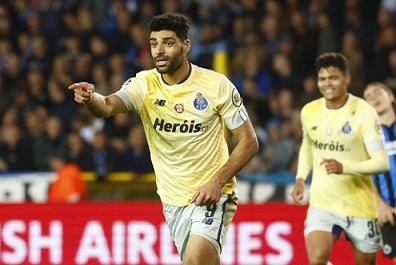 In matchday two of this season’s Champions League, Club Brugge embarrassed Porto badly by winning 4-0 at the Estádio do Dragão, leaving the Portuguese champions with zero points from two matches in Group B.

Tonight, Sérgio Conceição and his team repaid the Belgian side in kind by winning 4-0 at the Jan Breydel Stadion to complete a remarkable turnaround in their European campaign.

A brace by Taremi and goals from Evanilson and Eustáquio booked Porto’s place in the knockout stage.

Porto were by far the most dangerous team from the kickoff, creating a handful of clear goal-scoring opportunities in the opening half hour before eventually breaking through in the 33rd minute.

Otávio picked up a loose pass from Mecheleque and immediately played a defence-splitting throughball to Mehdi Taremi, who calmly slotted the ball past Mignolet to give the visitors a deserved half-time lead.

Brugge were given an ideal opportunity to equalise at the start of the second half as David Carmo was penalised for a clumsy foul in the box, the referee pointing to the spot after consulting the pitch-side monitor.

Diogo Costa, who had saved penalties in each of his two previous Champions League matches, kept out Vanaken’s effort, but his and his teammates’ effusive celebrations were cut short as the referee ordered it to be retaken owing to encroachment into the box by Eustáquio.

This time it was Noa Lang who stepped up, but amazingly Costa dived the opposite way to produce another stunning stop.

It proved the turning point as five minutes later Evanilson latched onto a looping Uribe pass inside the box and shot home to double Porto’s lead. Two more goals soon followed, scored by Eustáquio and Taremi, both of which were preceded by superb work from the effervescent Galeno.

With Atletico Madrid and Bayer Leverkusen drawing later in the evening, Porto’s progress in the competition was assured, as was Brugge’s.

It is proving to be a fine European season for Porto and Portugal’s other representatives in the Champions League, Benfica and Sporting. To keep track of their progress, as well as all the Primeira Liga action and Portugal’s national team, check out Portugal live scores to stay on top of all the news, results and fixtures.

“It was a deserved victory. My players were extremely competent. We put in a very good collective display in all aspects of the game.

“Was it our best performance of the season? It was a very consistent showing. But these are the same players that lost 4-0 at the Dragão.

“To win we had to understand the strong points of Club Brugge. They are very dangerous down the flanks, and are very mobile with the ball. That meant it was important for our forwards to slightly change how they played. This collective effort was important in the defensive dynamics of the team, so we could then exploit some of Club Brugge’s weaknesses. That’s what we did.

“We were not clinical in the first half. We had four or five chances to score. Our lead was narrow at the break, but afterwards we scored more goals with excellent quality moves. We were a very capable team in all aspects of the game.”

Wow wow. Diogo Costa is a monster. 4 pen saves in a row in the CL. Must be close to a record I’m sure!

Epic result and good all-around game. Fabio Cardoso is proving a good replacement for Pepe, though Porto will need another CB acquisition in January if Pepe's knee continues to be an issue.

Pepe Aquino is a brilliant player, but he disappears...

Epic result and good all-around game. Fabio Cardoso is proving a good replacement for Pepe, though Porto will need another CB acquisition in January if Pepe's knee continues to be an issue.

Pepe Aquino is a brilliant player, but he disappears in that RB role. Not sure what benefit Conceicao sees in putting him there, but that's why he's paid the big bucks. Would love to see Manafa make his way back into the team as he is one of Portugal's more underrated RB's.

Taremi was brilliant, as has been the case all season. Eustaquio with another majestic performance. Galeno was also heavily involved and is giving Porto some flair in their attack. Diogo Costa is, for my money, the best goalkeeper in the world at the moment. He has always been high-level, but this season he has the aura and confidence where he literally impacts every Porto game.

On the negative side: Carmo, despite having a good game, nearly cost the result and the place in the round of 16. He needs to deal with the pressure better. Zaidu, who is great defensively, was a little below his standards. Evanilson scored, which is good, but his form and confidence have been off as well.

All in all, great result, hoping Porto, Benfica and Sporting are all in the next round.

DIEGO COSTA will make a difference at the WC. Excellent shot-stopper.

Diogo Costa has to be the best Portuguese PK stopper since Ricardo.

Pui P was great on PK's but Diogo is on another level.