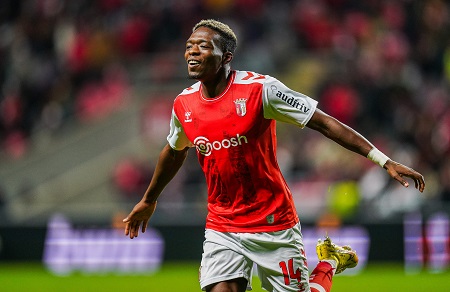 Braga’s Europa League campaign came to a close despite a 2-1 win against Malmö. The Portuguese club took a 1-0 lead into the break after Ricardo Horta scored in a one sided first half.

The floodgates threatened to open after Álvaro Djaló extened the lead in the 55th minute before the Swedish side hit back.

Patriot Sejdiu got a goal back in the 77th minute, Diego Lainez and Isaac Kiese Thelin hitting the woodwork in an exciting end to the game.

The victory wasn’t enough for Artur Jorge’s side to finish second in Group D, a third placed finish sees the Warriors drop into the Europa Conference League play-offs.

Malmö created the first chance of the game after a Vítor Tormena turnover, Mohamed Buya Turay racing clear and firing wide. It was the hosts only chance in the first half, the Swedish side more intent on defending deep despite losing all five group stage games.

Braga were having problems breaking through their low block which consisted of a flat back five and three midfielders dropping deep.

Simon Banza went close to getting onto long balls over the defence before André Castro tested Johan Dahlin in the 13th minute, his curling effort tipped wide by Johan Dahlin.

Banza headed Víctor Gómez’s cross at Dahlin before Braga broke the deadlock in the 36th minute.

Romain Gall’s clearance rebounded off Hugo Larsson into the path of Ricardo Horta, his shot saved before gathering the rebound and finding the net despite Matej Chalus being stationed on the line.

Abel Ruiz made way for Álvaro Djaló at the break before Malmö started to create chances. Sören Rieks’ shot was deflected wide, the resulting corner finding Ola Toivonen who forced a save from Matheus.

The Swedish side couldn’t sustain the pressure and found themselves 2-0 down in the 55th minute. Chalus cleared Víctor Gómez’s cross straight to Djaló, the winger showing strength to hold off Erdal Rakip and find the bottom corner.

The floodgates threatened to open with Dahlin called into action to save shots from Rodrigo Gomes and Horta.

Uroš Račić and Hernâni Infande replaced Al Musrati and Gomes, Infande immediately involved when he ignored better options before going himself and firing over the bar.

Age Hareide finally made his first move in the 61st minute when he overhauled his front line, Ola Toivonen and Turay making way for Patriot Sejdiu and Isaac Kiese Thelin.

The game appeared to be heading towards a logical conclusion when Diego Lainez replaced Horta in the 73th minute.

Malmö make a game of it

The comfortable finish most were expecting didn’t eventuate however, Malmö getting a goal back in the 77th minute. It was the two new strikers who combined, Thelin racing clear and releasing Sejdiu who beat Matheus and the backtracking André Castro.

The goal brought the game to life, Lainez forcing a save from Dahlin before the Mexican winger fired a follow up effort off the bar.

Malmö went desperately close to equalizing in the 87th minute, Sejdiu’s cross finding an unmarked Thelin who hit the post.

Braga into the Conference League

The victory wasn’t enough for Braga to stay in the Europa League following Union Berlin’s 1-0 victory against Union Saint-Gilloise in Belgium. The Warriors surrendered leads in both matches against the Belgian club and conceded an unlucky penalty in the 1-0 defeat to Union Berlin in Germany.

Their European adventures will continue in the Europa Conference League play-offs where they will learn their fate in the draw which takes place on Sunday.

Well, not including qualifiers (Gil Vicente and Guimaraes were eliminated early). Hopefully at is a level they can go far. We badly need the coefficient points.

Samuel
There are no comments posted here yet