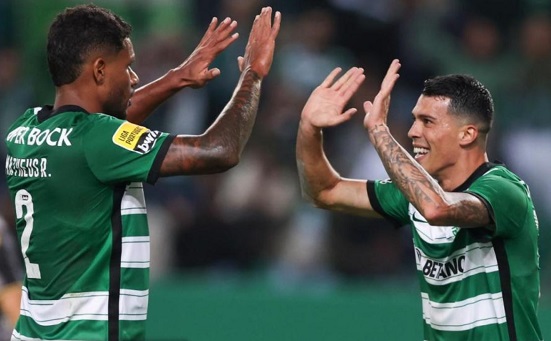 A turbulent week for Sporting Clube de Portugal ended on a high note with a comfortable 3-0 win over Vitória in Lisbon tonight.

The home team were well on top even before Afonso Freitas was sent off in the 26th minute. Goals from Pedro Porro and Hidemasa Morita gave the Lions a 2-0 lead at the break, with Marcus Edwards’ deflected shot in the second half completing the scoring.

Recent poor results had led to considerable speculation that Rúben Amorim’s job at Alvalade could be under threat. The young manager moved to quash such rumours in midweek by saying: “I will be Sporting coach to the end of the season come what may. I will not abandon my boys, even if we are down in tenth or eleventh place in the league.”

The defiant stance had the desired effect on his team with the Lions starting strongly against an in-form Vitória. Sporting were on the attack from the off, Pote’s early effort deflected narrowly over the bar.

The northerners arrived in Lisbon on the back of 4 consecutive wins and an unbeaten run of 7 matches stretching back to the start of September, but Vitória seemed to have left their inspiration in Guimarães as they rarely got out of their own half, save a few rapier thrusts from skilful winger Nélson Luz.

First Porro won and took a free kick, his cross headed just wide by Paulinho. The Spaniard then found Pote with a superb cross-field pass, Gonçalves showing superb control to bring down a high ball but with just Bruno Varela to beat he shot wide.

Sporting’s incessant pressure did not let up, Porro playing a low cross to Morita, whose first-time effort forced an instinctive save out of Varela. Vitória could not clear the ball, and when it was crossed into the box again Porro headed over the bar on the run.

Just when it seemed Vitória had weathered the storm, Afonso Freitas picked up a second yellow card for an over-zealous challenge on Gonçalo Inácio and the visitors were reduced to ten men.

Amorim reacted to the situation by throwing on Marcus Edwards, who had been surprisingly benched, with Flávio Narzinho making way.

In the 35th minute Sporting took the lead through a close-range header by Pedro Porro (who was playing more like a winger than a wing-back) that took a deflection of Edwards on its way into the net. However, the goal was all about the assist, a brilliant dribble along the byline and into the box by Matheus Reis, followed by a pinpoint cross from which Porro could not miss.

The home supporters were soon celebrating again, a fine cross by Edwards met by the onrushing Morita at the second post to make it 2-0 at half time.

Goalscorer Morita was taken off at half time, replaced by Rochinha, but there was no let-up from Sporting who naturally arrived at 3-0 in the 56th minute, albeit with a touch of fortune.

Marcus Edwards picked up the ball 24 yards out, shimmied across the edge of the box and left fly with his left foot, the ball taking a big deflection off Ibrahima Bamba’s head and looping over Varela into the back of the net.

Both teams made a flurry of substitutions as the game largely lost interest from that point onwards, the to-and-from between the two sets of supporters proving feistier than the action on the pitch for the last half hour.

The game finished with Paulinho producing a lovely turn and thumping shot into the corner of the net, but the celebrations were cut short as VAR chalked off the goal for offside.

The victory and convincing performance will appease Sporting’s fanbase somewhat as Amorim looks to regroup during the World Cup break and make sure the Green and Whites come back stronger for the second half of the season.

As for Vitória, tonight goes down as a bad day at the office, completely at odds with what they have been showing in recent weeks. Even so, 20-year-old centre-back Ibrahima Bamba caught the eye with another excellent display. He will surely be playing for a club with loftier ambitions soon.

by Tom Kundert, at Alvalade