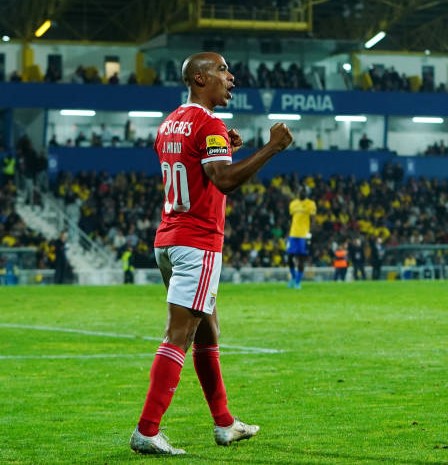 Benfica have prolonged their exemplary form at the top of the Primeira Liga table with their 11th victory of the league season, defeating Estoril 5-1 away from home.

The Eagles were the last of the ‘Big Three’ in action in a visit to Estoril’s home ground on Sunday night, impressing onlookers with a comprehensive 5-1 triumph, complete with goals from Petar Musa, António Silva, João Mário and Mihailo Ristic.

Prior to Matchday 11’s conclusion, FC Porto firstly set the tone with a big win at home to Paços de Ferreira, as the minnows remained rooted to the bottom of the table after a 4-0 loss. But the show was stolen by Benfica yet again, remaining eight points clear at the top.

Fresh from European joy that saw the Dragons secure top spot in their Champions League group, Porto were hoping to double up on their success with a win back on Portuguese soil to refocus their challenge for the title.

It took just four minutes for the hosts to find themselves in front, benefiting from a timely Evanilson run before the forward could lift the ball past the goalkeeper on the half-volley.

Paços sniffed for the equaliser but were made to pay for their inefficiency up top via a quick double from Mehdi Taremi and that man again, Evanilson, putting Sérgio Conceição’s team ahead by three goals in the 39th minute.

The horror show continued in the second half as Juan Delgado placed the ball in the back of his own net in the 54th minute, condemning Paços to their 10th defeat of the season. Porto’s win sees them reclaim second place after Sporting de Braga came unstuck away to high-flying Casa Pia, leaving a point’s distance between the two sides reaching for Benfica on the podium.

All eyes were on Benfica after their table-topping form was felt by Paris Saint-Germain, Juventus and co. This Sunday, it was back to the league where Estoril were the ones tasked with stopping Roger Schmidt’s seemingly untouchable side.

The enormity of the challenge became evident as the half evolved, helped on by Musa’s headed opener from inside the box, assisted by Alex Grimaldo’s cross for his fifth goal in seven games. The spotlight soon found a new darling, however, as the much-adored António Silva pounced on a Chiquinho back-heel to flick his own effort goalwards and make it 2-0 on the half-hour mark.

Not content with his first effort, the 18-year-old centre back grabbed his brace from another set-piece routine, although this one proved a lot simpler to convert as he nodded home from a couple yards out, totally unmarked.

Benfica powered on in the second period where João Mário got in on the act for goal number four in the 67th minute, meanwhile the effort of the night was reserved for Mihailo Ristic, getting his name on the end of the visitors’ fifth of the night before Benchimol’s consolation for Estoril.