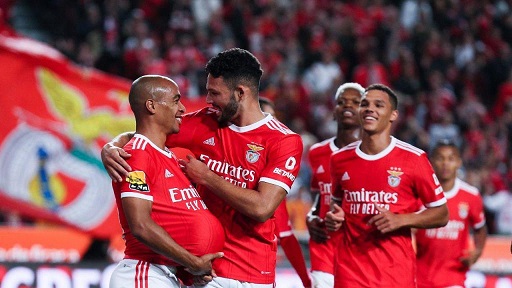 Benfica restored their 8-point lead at the top of the Primeira Liga with a 3-1 victory over Gil Vicente on a rainy Lisbon evening.

Despite not being at their best, a penalty converted by João Mário and a Gonçalo Ramos brace gave the home team the three points, with Fran Navarro inevitably scoring Gil’s goal, also from the penalty spot.

With invincible Benfica welcoming a Gil Vicente side that has badly struggled this season, the expectation was a routine win for the hosts, who lined up with their full-strength starting XI, Gonçalo Ramos back from injury to replace Petar Musa at centre-forward.

But right from the off Gil Vicente showed they would not be lying down, pushing men forward and enjoying significant possession in the Benfica defensive half of the pitch in the opening minutes.

Nevertheless, the well-oiled Benfica attack did not take long to cause panic in the Gil defence. In the 6th minute David Neres released Rafa, his deflected shot thudding against the post, although it would not have counted as the referee whistled for offside.

Rafa soon picked up the ball in a dangerous position, speeding into the box past Rúben Fernandes, who scythed down the forward for an obvious penalty. João Mário made no mistake, hammering the spot kick hard and low past Kritciuk. 1-0 Benfica.

The lead did not last long though. From a counter-attack Fran Navarro’s header was stopped in its tracks by Otamendi’s arm and the referee immediately pointed to the spot. Another penalty, another no-nonsense conversion, this time by Navarro. 17 minutes, 1-1.

Unlike almost all games at the Luz this season, Benfica were finding it difficult to carve out chances, with Gil hogging the ball for spells with excellent passing and movement, albeit not creating chances either.

João Mário and Grimaldo tried their luck from distance but did not trouble Kritciuk, but in the 36th minute Benfica found a way through with the usual suspects involved in the goal. Rafa played in Neres, the Brazilian’s deflected cross-shot rolling across the line to leave Gonçalo Ramos with the simplest of finishes from point-blank range.

The low-key pace of the match did not alter in the second half, but Benfica did not need to be at their best to score again. A short-corner routine saw the ball played to Enzo Fernández and his delicious cross was headed into the net by Ramos in textbook fashion to make it 3-1.

With the result beyond doubt, Benfica at last began to string together some of their trademark fast-paced attacking moves that have become a feature of their play under Roger Schmidt.

Ramos came close to completing his hat-trick, only the post denied David Neres after a terrific 20-yard shot, and substitute Petar Musa was denied by a brave Kritciuk save after a wonderfully perceptive pass from João Mário.

The last goalmouth action saw Gil substitute Boselli pick up on some loose Benfica defending and fire a 20-yard shot just wide of the post.

Perhaps influenced by the fact several of their players are heading to the World Cup, Benfica produced a somewhat muted performance with little of their dynamism of recent months, plenty of missed passes and a certain lack of concentration.

Nevertheless, another home win was never in jeopardy and the Eagles completed a first part of this unusual World-Cup interrupted season that has surpassed the expectations of even their most optimistic fans.

25 games in all competitions, 21 victories, zero defeats, top of the league with an 8-point cushion, winning their Champions League group ahead of PSG and Juventus, and safely through to the last 16 of the Portuguese Cup. It could not have gone better. The question now is whether the long break will disrupt their rhythm. If not, Benfiquistas are in for a memorable season.

In stark contrast, Gil Vicente have had a traumatic season after a brilliant 2021/22, and go into the break currently occupying the relegation playoff position. Ivo Vieira’s reign was an unmitigated disaster, but there were signs tonight that under new coach Carlos Cunha the team from Barcelos can turn it around.

It was remarkable to see Gil hold onto the ball for long spells, especially in the first half, and make the home players chase them down – something which has been a rarity for Benfica under Schmidt.

However, looking at Gil’s scoring stats it is obvious were their main problem lies. Just 11 goals scored in 13 Primeira Liga matches this season, and 8 of them by Spaniard Fran Navarro. For Gil to get out of trouble, Cunha has to get his team to turn promising approach play into chances and find someone other than Navarro who can hit the net.