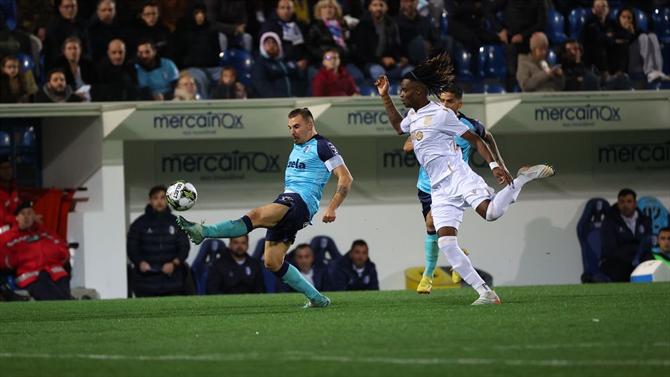 Liga Bwin football is back after the World Cup break, and it’s back with a bang as Benfica’s long unbeaten run was ended in style by a resurgent Braga. Porto and Sporting took advantage of the dropped points with convincing wins of their own, overcoming Arouca and Paços Ferreira respectively.

Famalicão and Gil Vicente gave their survival hopes a shot in the arm each, overcoming Chaves and Santa Clara. Casa Pia’s dream season continued, returning from the hiatus with an impressive win at Portimonense.

Another team to register an important triumph was Vizela, who triumphed over Vitória Guimarães in no small part due to the excellence of their midfield maestro Samu, the final PortuGOAL Figure of the Week of 2022.

Fábio Samuel Amorim Silva, better known simply as ‘Samu’, has been a key part of Vizela’s incredible rise to Portugal’s Primeira Liga over the last few years. Signing for the club in the summer of 2019, he helped them to promotion from the third tier and into Segunda Liga before Vizela repeated the trick the following year, moving up to the country’s top table for only the second time in their history.

A former talent of the Porto and Boavista youth systems, Samu found it difficult breaking into either side’s senior ranks, mostly featuring in the third division in loan spells with Fafe and Espinho. However, the player has grown in stature at a very similar rate to his current club side and now represents arguably the most consistent player in the squad.

His levels this campaign perhaps have not been quite at the excellent standards he set in 2021/22, when he inspired the team to league survival and 14th place in the table, a quite remarkable achievement given the team’s lack of experience at the top.

A classic ‘number 8’ midfielder, there are no obvious weaknesses to Samu’s game, able to cover a lot of ground between either box as well as posting a very reasonable eight goals and assists total for the prior season, given this is not an area of his game is particularly relied upon for.

As mentioned, this time around has been somewhat rockier territory for both club and player, Samu unable to reproduce the numbers or form he is capable of and indeed Vizela recently fired the hugely popular Álvaro Pacheco as manager, prompting fan displeasure and a big task for his former assistant Tulipa to pick up the slack ahead of the resumption of Liga Bwin football following the World Cup break.

Said resumption for Vizela took place on Friday evening with the team hosting Vitória Guimarães. Samu returned from a minor injury to take his place in midfield and how vital this proved as the Portuguese midfielder grew into the match to dominate proceedings.

A slick first half interchange between Samu and winger Kiko Bondoso almost led to the opening goal, Vitória keeper Bruno Varela having to be alert to prevent an own goal at his near post.

The home side would have the chance for a lead at the break as striker Milutin Osmajić won a penalty in the 43rd minute. Skipper for the evening Samu stepped up and fired down the middle to break the deadlock.

Buoyed by his first goal of the season, Samu just got better and better in the second period and doubled his tally for the campaign just minutes after the break, and in magnificent fashion too. Latching onto midfield companion Claudemir’s long pass, Samu spotted an onrushing Varela miles out of his goal and superbly hoisted a left footed lob over the goalkeeper into the empty net, sparking wild celebrations from the Vizela bench and support.

Samu continued to play with confidence and almost had a hand in more goals. Minutes after his second goal his stylish backheel set Osmajić free, but the forward’s cross into the middle was fired over the bar by the awaiting Bondoso.

Good defensive work for Samu moments after set another attacking move in motion, resulting in a big chance for Osmajić but Varela was equal to the eventual effort.

Samu was substituted with five minutes remaining, a move followed by Osmajić getting a deserved goal to round off a fine performance with a 3-0 victory.

This was a big win for Vizela, moving them up to 11th spot in Liga Bwin and providing a significant boost to their hopes of remaining in the top flight for a third consecutive season. On a personal level Samu will be hoping this is a watershed moment for his own fortunes, his first goals of the season could spark a rejuvenation in the player, and see him resemble the midfielder he has already shown he can be at this level.