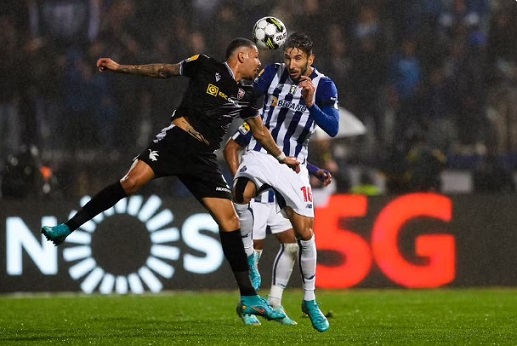 A resolute performance by Casa Pia saw the Lisbon outfit hold FC Porto to a goalless draw at the Jamor National Stadium tonight, despite playing over half the match with only ten men.

After making a bright start Porto came up against a brick wall in the shape of a superbly marshalled defence, and on the few occasions they did find a way through, goalkeeper Ricardo Batista was on hand to earn a precious point for Filipe Martins’ side.

Porto started on the front foot, pinning Casa Pia deep in their own half. A deflected Galeno shot earned an early corner, with the ball eventually coming to Uribe who hit a powerful 20-yard effort on target but home goalkeeper Ricardo Batista got his body behind it and held on.

Otávio was next to test Batista, but the Casa Pia No1 again showed save hands to grasp the Portugal midfielder’s firm shot. Taremi appeared set to open the scoring, but the Iranian striker failed to get a proper connection on the ball as he fell.

The hosts gradually began to get a foothold in the match. Varela was responsible for Casa Pia’s first threat on Porto’s goal with a dangerous header narrowly wide midway through the half.

Chances dried up as a hard-fought midfield battle ensued. On the stroke of half time Casa Pia suffered a big setback when Lucas Soares received a second yellow card for a crunching tackle on Galeno.

The Dragons came out re-energised after the break, no doubt having heard some choice words from coach Sérgio Conceição, but still struggled to penetrate Casa Pia’s back line.

Nevertheless, it was one-way traffic and the chances soon started to appear. In the 56th minute João Mário swung over a peach of a cross that the onrushing Galeno met with a thumping header, but it was directed too high and fizzed over the bar.

Five minutes later and it was Taremi’s turn to go close with his head, getting plenty of power on Otávio’s floated cross but again directing it off target, a metre past the post.

Porto substitute Toni Martínez came desperately close to finding the breakthrough in the 70th minute as a fine quick-passing move opened up a shooting opportunity from 10 yards out for the Spaniard, who hit the ball well enough on the turn, but Batista produced a stunning reaction block with his outstretched left boot.

Taremi then forced Batista into an unorthodox save with a thunderbolt of a shot from the edge of the box.

Having proved Casa Pia’s saviour, Batista almost undid all his good work when he miscalculated an attempt to cut out a cross, with the ball falling to Ivan Marcano, but the central defender could only hook his effort over the bar with the goal at his mercy.

Batista soon composed himself and leapt acrobatically to deny Martínez once again, and ensure the points were shared.

The result sees Porto drop to 3rd in the standings, overtaken by Braga in second, while the gap to leaders Benfica increases to seven points.

Casa Pia remain in fifth place and should the Gansos maintain this level of competitiveness qualification for a European competition next season is a real possibility.

By Tom Kundert at the Estádio Nacional