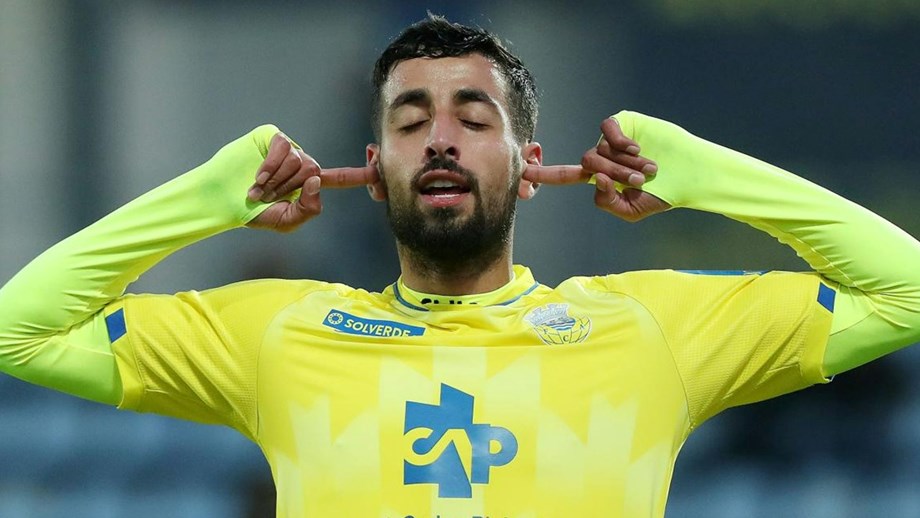 It was a wet and windy start to 2023’s Liga Bwin action as the title race followed the Portuguese weather in taking a turn. Leaders Benfica’s victory over Portimonense extended their lead at the top to 6 points, the Eagles recovering from last week’s loss to Braga, who in turn jumped into second place themselves by battering Santa Clara.

The aforementioned dynamic occurred by virtue of Porto and Sporting dropping points, the former held by the ever-impressive and arguable story of the season Casa Pia, while the latter were stunned in Madeira by Marítimo.

Another of the league’s surprise packages this campaign has been Arouca, who have quietly established themselves into the top half of the table. Their charge up the table has been spear-headed largely by forward Oday Dabbagh, who is our PortuGOAL Figure of the Week after a terrific individual display in helping his team overcome Estoril.

Palestinian international Oday Dabbagh was a surprise signing by Arouca back in the summer of 2021, the striker having only played in his native country up until that point and thus being a virtual unknown upon his arrival to Portugal.

Three goals from his first eight appearances for the club was a very respectable beginning to his Primeira Liga career, particularly as he was only in the starting eleven for two of those matches. A loss of form and fitness concerns hampered his impact and goalscoring numbers come the end of his debut campaign but he had shown promise of being capable at this level.

Visa issues complicating a timely return to Portugal following his summer break meant Dabbagh has had a far trickier opening period to the current campaign, only making his first showing for Arouca in 2022/23 in early October. However, the forward has wasted little time on looking to make up for his prior absence, easing his way into the team to produce some fine numbers in front of goal, nearly doubling his output for the entirety of 2021/22 already.

The latest of those goals came on Saturday afternoon as Arouca looked to recover from back-to-back defeats suffered against Porto and Rio Ave. In hoping to return to winning ways they hosted Estoril at a sodden Estádio Municipal, the heavy rain significantly impacting the turf.

The damp conditions didn’t stop Dabbagh from tormenting Estoril throughout however. The Palestinian almost opened the scoring in the 22nd minute, latching onto a long clearance to take on the defence alone, cutting inside before firing a low shot just wide of opposition goalkeeper Dani Figueira’s far post.

Just a few minutes later Dabbagh did find the target to break the deadlock. Alan Ruiz’s deflected cross forced Dabbagh to re-adjust his position, but the striker improvised superbly to acrobatically thunder a volley past Figueira.

Just before half time Dabbagh should have had an assist to his name, cleverly flicking a through ball into the path of team-mate Morlaye Sylla, but the midfielder’s effort on goal was denied by Figueira.

Into the second half Arouca put the game beyond Estoril as Dabbagh grabbed his second of the afternoon. Good work from Sylla and Brazilian winger Anthony in the buildup ultimately resulted in the simplest of finishes for Dabbagh to double his tally, and make it seven goals for the campaign in all competitions.

Dabbagh was inches away from completing his hat-trick just after the hour mark, stretching to meet Ismaila Soro’s cross but only able to prod the ball wide. It mattered not in the end though, a 2-0 victory for Arouca enough to send them to the lofty heights of 7th place in Liga Bwin.

It’s an excellent achievement to reach such a point in the division for a club of the size and budget of Arouca, a team that has experienced highs and lows in the last decade but are very much on the up, buoyed by consecutive promotions in recent years to make their return to the top flight. The transfer recruitment in the past seasons has been astute, bringing in experienced campaigners like midfielder David Simão but also taking chances and scouting well for the likes of Dabbagh. The Palestinian striker is one of the more underrated frontmen in Portugal but more goalscoring exploits such as those displayed this weekend will soon get more standing up and taking notice.