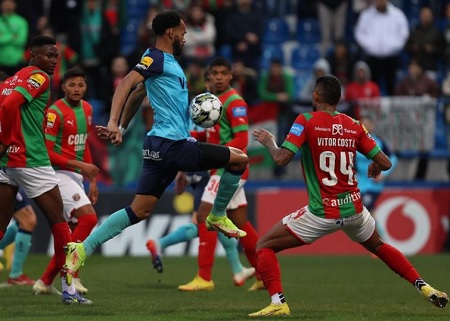 Vizela made it back-to-back home wins in the Primeira Liga after a comfortable 3-0 victory against Marítimo.

The contest was largely over inside the opening seven minutes after Samu assisted two goals for Milutin Osmajic, the Maderia club facing an uphill battle after failing to score two goals in their previous 18 league games.

The contest was over in the 53rd minute when Marítimo were reduced to 10 men, Matheus Costa shown a straight red card for bringing down Osmajic.

Vizela bossed the rest of the match, Anderson converting from a corner in the 75th minute to lift Tulipa's side into the top half of the table.

Marítimo came to Vizela full of confidence after beating Sporting CP 1-0 in Madeira, but any signs of optimism were obliterated after seven minutes when they found themselves 2-0 down.

Samu played a neat 1-2 with Kiko Bondoso before his cross evaded the visitors’ defence which provided Milutin Osmajic with a tap in.

A loose pass from Moisés Mosquera was then punished, Samu and Osmajic combining brilliantly to bamboozle Marítimo’s defence before the striker doubled his tally.

Osmajic had a great chance to net a hat-trick in the 10th minute. This time it was a poor pass from João Afonso, Bondoso releasing the Montenegrin who was denied by Marcelo Carné.

Nuno Moreira curled a low shot wide before a weak effort was comfortably dealt with by the busy Brazilian goalkeeper.

Moreira was unable to race clear in the 22nd minute after being released by Anderson, but chances were hard to come by for the remainder of the first half.

The conclusion of the opening period was just ugly with Kiki, Claudio Winck and Rafael Brito all booked before the break.

José Gomes made a change in midfield with João Afonso making way for Stefano Beltrame, his side creating the first opportunity in the second half when Bruno Wilson deflected Xadas’ shot wide.

Any chances of a Marítimo fight back fizzled out in the 53rd minute when they were reduced to 10 men.

Moreira released Osmajic who was brought down on the edge of the area by Matheus Costa. He was initially given a yellow card, Manuel Oliveira upgrading it to a red after a VAR intervention advised the referee to watch replays on the touchline.

Samu’s free kicked was tipped over the bar by Carné before brought on Renê Santos for Leo Pereira, the central defender making his first appearance after rejoining the club in January.

Vizela were enjoying the extra man advantage, playing some fine football and completely dominating the contest.

Raphael Guzzo couldn’t keep his effort down, Osmajic’s shot was deflected over the bar by Vitor Costa and Bondoso’s shot was saved before Guzzo fired another chance over the bar.

Gomes tried to stop the onslaught in the 66th minute when he brought on Val Soares and Percy Liza for Rafael Brito and Chuchu.

Osmajic shot into the side netting before Marítimo finally made an imprint in attack, Liza narrowly missing the top corner with a shot from distance.

Mosquera was almost punished after inexplicably giving the ball to Etim in his own box, Vizela not letting the young centre back off the hook after Anderson scored from the resulting corner.

Vizela had two more opportunities to extend their lead with Bruno Wilson and Osama Rashid seeing their shots saved, but it was job done for Tulipa’s side who climb into the top half of the table.

By Matthew Marshall at Estádio Do Vizela