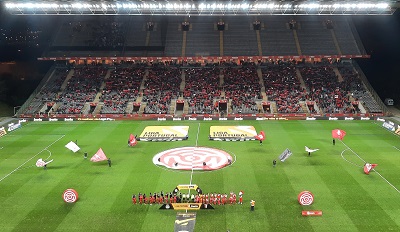 The first half was a forgettable affair before an explosive start to the second half where the Warriors took the lead after just six seconds.

It was an incredible goal coming from Boavista’s kick off, Bruno Onyemaechi’s back pass pounced on by Vitinha who took advantage by beating Rafael Bracali.

Braga were far from their best but the victory keeps them in the title fight, narrowing the gap behind Benfica to three points and establishing a four point lead over Porto, the Eagles and Dragons playing their game in hand tomorrow.

First half to forget

Braga bossed the game early on with Nuno Sequeira and Ricardo Horta heavily involved, but neither side were able to fashion a chance in the opening 25 minutes.

Boavista were first to fire a shot in anger when Yusupha Njie blasted high and wide. The Gambian striker soon became the centre of attention, seeing another shot blocked before two headed efforts went wide, the second a great chance after meeting Ricardo Mangas' cross at the back post.

Braga eventually began to string passes together in the final third, Vitinha winning a duel with Pedro Malheiro before his weak shot was gathered by Rafael Bracali.

Vitinha had another attempt in the 37th minute after receiving a clever pass from Ricardo Horta, the young striker firing too close to Bracali who made the save.

Artur Jorge made one change at the break, Uroš Račić hooked at half-time for the second consecutive match to make way for André Horta.

It was an incredible start to the second half and one that Petit couldn’t have imagined in his worst nightmares. Boavista kicked off and played the ball back towards their own goal, Bruno Onyemaechi's wayward pass intercepted by Vitinha who beat the helpless Bracali.

Ricardo Horta saw his low drive saved and Iuri Medeiros missed the top corner before Medeiros was replaced by Rui Gomes. Petit made two changes of his own with Ibrahima and Ricardo Mangas replaced by Kenji Gorré and Salvador Agra.

With Braga failing to press home their advantage and Boavista threatening to get back into the contest, Jorge added more solidity to his side in the 69th minute when he replaced Nuno Sequeira and Abel Ruiz with Cristián Borja and André Castro.

Robert Boženík came on for Bruno Lourenço in the 76th minute but Boavista were not testing Matheus.

Ricardo Horta made way for Hernâni Infande in the 83rd minute, André Horta and Hernâni taking turns in driving the ball over the bar as Braga claimed another important three points.

They won’t be selling this match on DVD anytime soon, but the Warriors and their supporters are unlikely to care as they consolidate second spot on the table, narrowing the gap behind Benfica to three points and increasing their advantage over Porto to four points.

Benfica and Porto play their games in hand tomorrow, the Eagles hosting Sporting CP in the Lisbon derby and Porto hosting Famalicão.