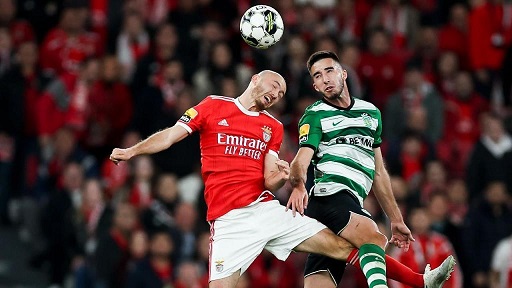 A typically fiery Lisbon derby ended all square as Benfica twice came from behind to draw 2-2 at a packed Estádio da Luz.

An Alexander Bah own goal and a Paulinho penalty twice put Sporting ahead, but twice Benfica equalised through Gonçalo Ramos.

The Eagles pushed hard for a winner late on but it was honours even at the final whistle.

For Benfica Grimaldo and Rafa Silva shook off knocks to take their place in the starting XI, while for Sporting Pedro Gonçalves continued his role in midfield in the absence of the injured Hidemasa Morita.

Betting on who will win the Primeira Liga or which Portuguese teams will qualify for the Champions League in 2022/23 using UK bookies not on Gamstop could prove profitable in what is proving to be an unpredictable season.

With Benfica flying high in first place and Sporting coming off a fifth league defeat at Marítimo last week, the expectation was that the hosts would dominate. However, a surprisingly confident Sporting – perhaps benefiting from the lack of pressure regarding their broken aspirations of getting into the title race – showed plenty of personality by knocking the ball around confidently all around the pitch and hogging possession in the early stages.

In the 5th minute a neat Pedro Gonçalves dribble induced Otamendi into giving away a free kick in a dangerous position. Porro struck his shot well but the diving Vlachodimos was equal to it.

Edwards was the next Sporting player to embark on a mazy run, with his subsequent pass just too far in front of Trincão.

Midway through the first half Benfica suddenly woke up with two big chances in quick succession. Enzo Fernández chipped an inviting pass into the path of João Mário, the midfielder drawing a sharp save out of Adán.

Almost immediately Rafa had an identical chance after cutting in from the right, skipping past Inácio and seeing the whites of Adán’s eyes, but again the Sporting goalkeeper won the duel.

In the 27th minute Sporting took the lead after a remarkable passage of play. The visitors strung together a long passing move covering practically the whole pitch, at the end of which Porro’s clever pass released Edwards, whose cross towards Trincão ended up in the net with Bah getting the final touch.

Benfica reacted to the setback positively, with Grimaldo sending the first of several free-kick opportunities he would have in the game hurtling towards goal, Adán beating it out.

A tale of two Silvas

Roared on by their supporters, Benfica turned the screw with Sporting unable to clear the ball effectively in the face of incessant pressure.

António Silva drove forward to keep an attack going, the ball eventually ricocheted to Rafa Silva who sped to the byline and crossed low for the lurking Gonçalo Ramos to finish off one of his typical poacher’s goals.

Benfica were now on top, albeit without creating clear chances as the referee blew the whistle on a high-quality first half with the teams going in at 1-1.

The second period started with a bang. Paulinho fell in the area under a challenge by António Silva, and initially play continued before the referee heeded VAR and the protesting Sporting players to look at the incident on the pitch-side monitor. The decision? Penalty! Pedro Gonçalves stepped up and showed no nerves to fire the ball in the corner and put Sporting back into the lead.

As in the first half, Benfica gave a strong reaction to falling behind, creating chances for Rafa, Ramos and Grimaldo, but Adán was relatively untroubled.

Ramos at the double

There was nothing the Spanish goalkeeper could do in the 64th minute, however, as a neat combination on the left saw Aursnes release Grimaldo whose low cross was again turned into the net from point-blank range by the opportune Gonçalo Ramos.

After over an hour of a pulsating derby, the crowd readied itself for a grandstand finish, but truth be told the match petered out somewhat as a series of injury stoppages and substitutions broke the rhythm of the game.

Benfica looked the most likely to grab a winner with Otamendi and João Mário testing Adán, although young Sporting substitute Youssef Chermiti had an opportunity to make a name for himself in stoppage time, only to blaze the chance over the bar.

As the full-time whistle went neither team would have been overly happy. Benfica saw their lead cut at the top of the table for the second time since the post-World Cup resumption, and are now just 4 points ahead of Braga.

Despite the encouraging display and result, Sporting face a huge battle to try and get back into contention for the Champions League places and risk falling to 5th place in the standings should Casa Pia win at Estoril tomorrow.

Shocked that there are no comments here... it seems that CR7 and Santos get all the attention lol.

Having had the chance to watch a bit of the Manchester and North London derby fixtures earlier in the weekend, I was very proud to see that the...

Shocked that there are no comments here... it seems that CR7 and Santos get all the attention lol.

Having had the chance to watch a bit of the Manchester and North London derby fixtures earlier in the weekend, I was very proud to see that the atmosphere in Lisbon was unmatched and spectacular really. And this is coming from a Sporting supporter.

Anyhow, this was a very entertaining match to watch.

I agree Nelson! Great game. It was nice to see an open, fluid game without a lot of the $hit housery that's usually typical of these matches. I think the draw was a fair result.

Great game! I love Ruben Amorim, but one thing that has been bugging me about him since last season is he needs to find the balance between his eagerness to attack and bring solid defending to the team as well.

It was very apparent in Champions...

Great game! I love Ruben Amorim, but one thing that has been bugging me about him since last season is he needs to find the balance between his eagerness to attack and bring solid defending to the team as well.

It was very apparent in Champions League last season vs City especially but of course that is City they would've beat anybody, but still we were naïve and reckless leaving our defense so open.

This season I had hoped to see improvement, but once again after being top of the group in CL we failed to see out games where we took the lead first and just needed to be solid defensively.

Attacking is great and all, but great defending is a spectacle too and should be something to be proud about too. Amorim needs to improve on this.

He's done great to win one league title for Sporting but he should be able to win another win with the talent at his disposal. Gotta improve defensively too.

So all that to say, it came up again in this game with Matheus Reis totally lacking awareness and failed to mark Ramos who drifted in unmarked to score an easy tap in smh.

Sporting has got to be better than this to be champions again. Step it up Ruben!