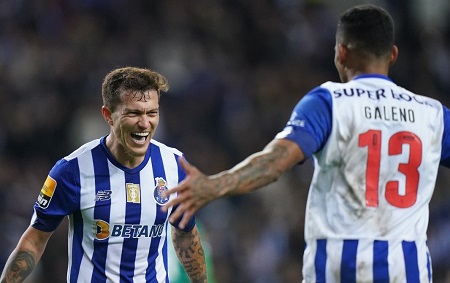 Porto got back to winning ways in the Primeira Liga after a comfortable 4-1 victory against Famalicão.

Galeno scored twice inside the opening 21 minutes before teeing up Otávio on the stroke of half time.

Mehdi Taremi extended the lead minutes after the break, Rui Fonte reducing the deficit but the visitors were unable to trouble Diogo Costa for the final 40 minutes.

The Dragons reduced the gap at the top of the table to five points, the three way battle for the title with Benfica and Braga well and truly on.

PortuGOAL’s Matthew Marshall reports from at Estádio do Dragão.

Galeno at the double

Sérgio Conceição made one change to his starting side, Toni Martínez replacing Gabriel Veron after coming off the bench to net a second half hat-trick in the 4-0 win against Arouca in the Taça de Portugal.

The striker fired the first shot of the contest after latching onto João Mário’s through ball but was unable to beat Luiz Júnior.

Mário gave the ball away at the other end which resulted in Santi Colombatto blazing over the bar, but the Dragons soon exerted their authority and took the lead.

The opening goal came in the 10th minute after some neat interplay on the right wing. Mário and Martínez combined again with the Spaniard beating Riccieli and delivering a cross that Galeno converted at the back post.

Porto were getting plenty of joy down the right wing where they fashioned their next goal in the 21st minute. Once again Mário was the instigator, Júnior parrying Mateus Uribe’s shot straight into the path of Galeno who couldn’t miss from close range.

Famalicão were rarely getting forward, Pablo heading Santiago Colombatto’s free kick over the bar before the action returned to the other end.

The Dragons killed the contest in the 42nd minute, Mehdi Taremi releasing Galeno who picked out an unmarked Otávio who had time to take a touch and find the bottom corner.

João Pedro Sousa made a change at the break with Zaydou Youssouf replacing Gustavo Assunção in midfield. His side went 4-0 down three minutes later.

It was a simple goal, Mário given time and space to measure a cross into the danger area where Mehdi Taremi headed into the bottom corner.

Famalicão finally found some joy in the 52nd minute when they reduced the deficit. Iván Marcano gave the ball away, Francisco Moura’s cross deflecting off Diogo Costa into the air, Rui Fonte getting in front of Marcano and heading the ball into the net.

Galeno and Martínez saw their shots blocked before Taremi was denied a sensational goal when his audacious lob was ruled out for handball. The visitors then put the ball in the net, Pablo clearly offside when his header beat Costa.

Sérgio Conceição made two changes in the 63rd minute when Marko Grujić and Martínez made way for Stephen Eustáquio and Pepê Aquino.

Iván Jaime was trying hard to instigate an unlikely come back, shooting over the bar and curling an effort wide before Pedro Sousa brought on Junior Kadile and Alexandru Dobre for Pablo and Fonte.

Porto should have extended their lead when Galeno raced through on goal and tripped over the ball with Júnior to beat, the winger sending another great chance wide seconds later after a clever 1-2 with Pepê.

Pepe received a rousing reception after replacing Marcano with 10 minutes remaining, Pepê and Taremi missing the final two chances as Porto cruised to the finish line.