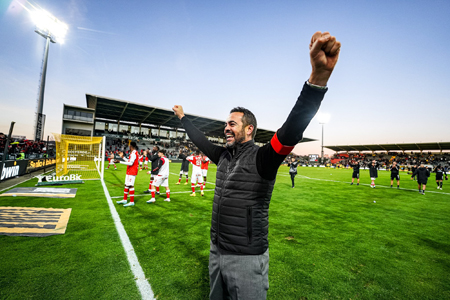 Braga beat Paços de Ferreira 2-1 in a sensational game of football at Estádio Capital do Móvel.

It was a tight first half before the game came alive, the Warriors taking the lead in the 58th minute when Vitinha finished a fine team move.

César Peixoto’s side showed spirit to stay in the contest and duly equalised 10 minutes later when Jordan Holsgrove fired a rocket into the top corner.

Braga were rewarded for their persistence deep into added time when Simon Banza took advantage of a failed clearance, dancing around defenders before finding the net.

Paços de Ferreira’s confidence from their first win of the season was on display early on, Nicolás Gaitán with the first shot of the match which was comfortably saved by Matheus.

César Peixoto’s side went close to taking the lead in the 14th minute when Juan Delgado’s cross was met by Alexandre Guedes, the striker taking a touch before unleashing a volley that was tipped off the bar by the Brazilian goalkeeper.

Braga breathed a big sigh of relief in the 18th minute when Nuno Sequeira was shown a straight red card for a sliding challenge on Delgado. Referee Cláudio Pereira downgraded it to a yellow after a VAR review, much to the displeasure of the home crowd.

Braga get into the contest

The visitors finally started to exert some pressure on the half-hour mark, Hernâni Infande driving into the area where his shot was blocked.

The chances kept coming with Vitinha threatening to get involved, but Marafona wasn’t being seriously tested, his biggest test easily passed when he tipped Iuri Medeiros’ shot wide.

Paços de Ferreira started the second half as they did the first, on the front foot and going close to opening the scoring.

Uilton cross picked out Guedes who forced another save from Matheus, Gaitán’s shot blocked and Carlos sending the follow up over the bar.

Braga went close from a corner when Paulo Oliveira’s close ranger header was saved by Marafona, but the Warriors stayed on the front foot and took the lead in the 59th minute.

It was a wonderful goal, started with a clever dummy from Abel Ruiz, the striker sent through by Medeiros before cutting the ball back to Vitinha who found the bottom corner.

It was now end to end action, Medeiros unsuccessfully attempting to lift the ball over Marafona, Butzke responding at the other end where he fired two efforts over the bar.

Thomas narrowly missed the top corner with a fierce strike from distance, the hosts rewarded for their persistence in the 68th minute when they deservedly equalised.

Jordan Holsgrove combined with Butzke on the edge of the area, the ball falling perfectly for the Scottish midfielder who unleashed a left-footed rocket into the top corner.

Medeiros continued his individual duel with Marafona, sending a shot straight at the keeper before rounding the Brazilian minutes later, unable to finish from a tight angle.

Jorge went for it in the 76th minure when he introduced Cristián Borja, André Castro and Simon Banza for Sequeira, André Horta and Medeiros. Gaitán made way for Bastien Toma.

Things were getting heated off the field with spectators being ejected and tensions on the pitch close to boiling over.

Braga were showing more attacking intent and regained the lead deep into added time. Thomas’ failed clearance fell straight to Simon Banza, the striker dancing around a number of defenders before sending his shot into the bottom corner.

Braga made it five straight wins in all competitions and narrowed the gap behind Benfica to one point.

Artur Jorge’s side continue to show incredible spirit and determination, winning yet another game with a late goal.

They did it without talisman Ricardo Horta, Vitinha scoring in his third successive match to make it 13 goals in 27 appearances this season.

Paços de Ferreira couldn’t back up after their first win of the season but showed plenty of fight as they try to climb off the bottom of the table.

Recent arrivals Marafona, Maracás and Alexandre Guedes have all come into the starting side alongside the return of César Peixoto.

It was understandable that they tried to hold on for a point, but once again an individual error or piece of bad luck prevented them from picking up points.

It doesn’t get any easier, the furniture capital club hosting Benfica in their next match.

By Matthew Marshall at Estádio Capital do Móvel