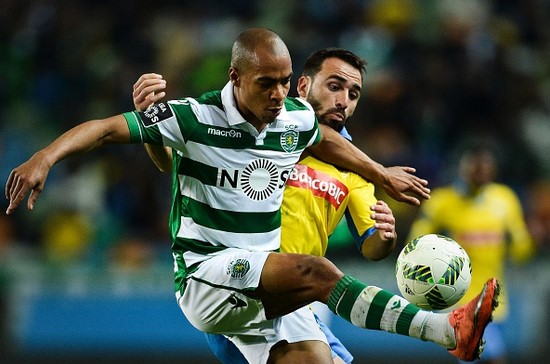 Sporting midfielder João Mário has been widely considered the best midfielder in the Liga NOS this season.

To listen to the interview (in Portuguese) click on the play button. English translation provided below.

PortuGOAL: Two years ago you were on loan at Vitória de Setúbal. Since then you've returned to Sporting where you are an undisputed starter, you are considered the best midfielder playing in Portugal this season and you've earned a place in the Portugal national team. Two years ago did you think this was possible?

João Mario: A footballer's life goes through several phases. I always believed I could play for Sporting and be a good asset for the club. Fortunately things are going well. We're fighting for the title, and that's the most important thing in a footballer's career.

PortuGOAL: Last year was a good year for you, but this season you've taken your game to another level. What role did Jorge Jesus play in that? What is he like to work with?

João Mário: He's an excellent coach. I knew I'd learn a lot with him. He's a very experienced coach who knows Portuguese football inside out. He's somebody who manages to get the most out of a player's potential. I'm very pleased I've been able to work with him this season and I've learned a lot from him.

PortuGOAL: Last week you said it was only a matter of time before Sporting would go top. It happened on Saturday, but then Benfica won again and claimed first place. Do you still believe Sporting can win the title?

João Mário: Yes, we really believe this, not only me, but the entire team and the club as a whole and all the fans have a lot of belief we can do it. We'll do everything we can to win these four finals in the belief that our rival will drop points.

PortuGOAL: Turning to Euro 2016, what are your expectations for Portugal ahead of the tournament in France?

João Mário: Above all I hope I'm picked for the tournament. Anything can happen. As our national team coach has said several times, we can dream and we believe we can win the trophy. We know there will be excellent teams there, but in football nothing is impossible, and that's what we'll base our hard work on to achieve our goals.

PortuGOAL: Portugal have a group of players of great potential at the moment: yourself, William, Danilo, Bernardo Silva, André Gomes, Renato Sanches... Do you think it's another golden generation?

João Mário: I don't know if it's another golden generation, but it's without doubt a very good generation. The team has been a mixture of these new players who have emerged and more experienced players. I think it can be a perfect combination, and if everything goes well we can achieve great things in this upcoming European Championship.

PortuGOAL: In Portugal's last game against Belgium you were considered man of the match and provided an assist for Cristiano Ronaldo to score. What's it like playing and training with Ronaldo?

João Mário: It's an incredible experience being able to be next to someone who I consider to be the best player in the world. He's an example for all young players in Portugal and beyond. I was very happy to be able to help him score another goal for Portugal. It's not only my objective, but it's also all my team-mates' to help him contribute and make the difference.

PortuGOAL: Let's imagine you have an excellent tournament in France. It's inevitable Sporting will receive offers for you. Are you ready to make the jump to one of Europe's major leagues?

João Mário: In football anything's possible. At the moment my focus is fully on the ambitions of my club. Depending on the Euro and depending on the future anything can happen, we all have the ambition to play in the major leagues and I'm no exception, but at the moment it's something I don't think much about.

PortuGOAL: There has been a lot of speculation about an alleged interest from Atletico Madrid and Manchester United. Which is the league that most interests you?

João Mário: The league I like the most and I've always liked the most is the English league. It's the league I like the most but that doesn't mean I think about that one alone. There are plenty of excellent leagues, the Spanish league is a great league, the German one too. I always try and watch foreign games because you can always learn something new. They are leagues with a different level of competitiveness, so I try and take something from every one to improve aspects of my game.

Tom Kundert was asking the questions.

Great interview of a really great player! Its been awesome to see Joao Mario's progress since coming into the first team. I remember since when he was in the juniors and b team we were calling for him to be included in the senior first eleven and...

Great interview of a really great player! Its been awesome to see Joao Mario's progress since coming into the first team. I remember since when he was in the juniors and b team we were calling for him to be included in the senior first eleven and since his first start vs Pacos when he came in for Andre Martins he lit up the whole game and showed his class and magic! Since then he's never looked back and has progressed really well becoming a regular national team player as well. Joao Mario has great attributes to me that make him the complete modern midfielder, excellent technique, ball control, dribbling skill, passing vision, strength, speed, creativity, and tactical awareness and intelligence, composure, maturity and leadership, the guy is a top player! Really proud of him and how great he's been for Sporting and I hope he continues and the whole team continues and makes us proud! The one area where I thought he needed to improve or do more of was attack the goal, shoot on goal etc, but in the last couple months he has been shooting more and been attacking the goal more and he's gotten more goals and assists now and I'm happy about that.

Once he keeps it up and stays level headed and hungry and focused he's got everything to become one of the very best midfielders in the world! And I've been happy with his attitude and mentality which I believe is a reason he has been able to progress so well too, he has a sense of maturity and wisdom which has helped him stay focused and not get carried away easily by the limelight.

We've seen that if a player doesn't have that maturity and wisdom even if they are talented they can make the wrong decisions career wise and when they try to rush their stardom they can end up actually harming it and haulting the progress of their career. Three examples of that to me from my very club Sporting, are Joao Carlos Tiexiera, Bruma, and Tiago Ilori. All three of them rushed it too much to go off to another league blinded by the spotlight and what happened to them? If we look at it all three of them actually were probably ahead of three other young Portuguese in Sporting now, Joao Mario, William Carvalho, and Paulo Oliveira (I know he was signed not academy produced point is he was still young). In the following seasons Joao Mario, William Carvalho and Paulo Oliveira's stock rose and rose till they became senior national team players (I know Paulo Oliveira isn't senior as yet, but if he hadn't gotten injured we all saw his quality as leader of Sporting's defense and he was definitely on track to be a senior national team player) and built great reputations in Portugal and attracting a lot of interest from abroad too.

Meanwhile what has happened to Joao Carlos Tiexeira, Bruma, and Tiago Ilori? They have actually regressed, their status has actually dropped and they're nowhere near close to the senior national team at the moment. Its a shame, cause they all were super talented too. It goes to show you how important being wise, patient, focused, dedicated and hard working is in the development of players.

Joao Mario is a player just like William, and Adrien, and Paulo Oliveira who has this understanding and attitude and mentality and that makes all the difference. He's on the right track and I'm proud of him and Sporting!