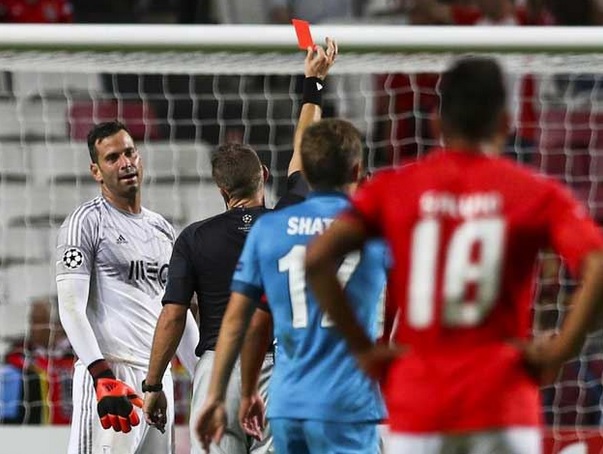 Benfica's Champions League campaign got off to a bad start as the Eagles were well beaten by Russian outfit Zenit St. Petersburg at the Estádio da Luz. A nightmare opening saw the hosts reduced to ten men following Artur's sending off and 2-0 down after just 22 minutes, the goals scored by old nemesis Hulk and former Benfica midfielder Axel Witsel.

The Eagles improved in the second half and were unlucky not to claw a goal back, and the players' efforts were at least rewarded by a tremendous (and highly unusual in Portugal) show of support for a losing team from the home fans who chanted loudly throughout the closing minutes. Nevertheless, Zenit were worthy winners and with two away games next, against Bayer Leverkusen and Monaco, Benfica are already facing a tough task to qualify for the knockout rounds.

Hopes were high that Benfica would start full of confidence after the 5-0 demolition of Vitória Setúbal on Friday evening. Coach Jorge Jesus kept faith in the same starting XI.

However, it quickly became apparent that putting a middle-level Portuguese team to the sword is one thing, while facing top opposition in the Champions League (Zenit have won all seven of their Russian Premier League games this season) is a very different proposition. The visitors took control from the off, with Hulk almost setting up a goal in the opening seconds, his run and cross on the left flank just evading the sliding Shatov.

The former FC Porto forward was causing havoc every time he picked up the ball against a strangely nervous Benfica, and it was little surprise when Zenit took the lead. Jardel's loose pass was picked up by Shatov who advanced before slipping a perfect pass to Hulk, who lifted a delightful finish past Artur.

The beleaguered Benfica goalkeeper then spilled a Hulk free kick and was relieved to see the rebound wasted by Garay. The home side's chaotic organisation was again ruthlessly punished in the 18th minute, some loose passing and static marking allowing Danny to run clean through. The Portuguese playmaker knocked the ball past Artur who body-checked him preventing a certain goal, with a red card the logical result.

Paulo Lopes came on and Talisca was sacrificed by Jorge Jesus, and from the resulting free kick Hulk's blasted effort was deflected just wide of the post. It was only a brief reprieve, however, as from the corner Axel Witsel rose highest to head into the net, Paulo Lopes managing to claw the ball out but not before it had crossed the line, with the referee making the correct decision to award the goal.

We were only halfway through the first half but the match was effectively over as a contest, with the incredulous crowd no doubt fearing a defeat by a humiliating scoreline, as Zenit continued to boss operations until the break.

Different attitude in second half

To Benfica's credit they refused to throw in the towel, and came out in the second half intent on hauling themselves back into the match, playing with an urgency and heart that had been completely absent in the first 45 minutes, albeit taking advantage of Zenit's more circumspect approach.

A Luisão header was brilliantly saved by Zenit goalkeeper Lodygin, and Salvio was unlucky not to earn a penalty when he looked to have been tripped in the box. In an open second half, Zenit also had several chances to extend their lead, with Hulk hitting the inside of the post from a narrow angle.

Try as they might, Benfica could not make the breakthrough that would have blown the match open again, but the team's efforts were recognised by the supporters, the whole stadium spending the final minutes thunderously chanting "Benfica".

Jorge Jesus made a point of thanking the fans in his post-match interviews, saying: "In six years as Benfica coach I've never seen anything like it. It was an emotional moment. I thank the supporters from the bottom of my heart. At times I've won games with Benfica away from home and the home supporters never stopped backing their team and I asked myself 'how beautiful, could this ever happen in Portugal?' Today it happened. This show of support will be important for the team and make us stronger."

The coach also insisted that qualification for the next stage is wide open, arguing that given the competitive nature of the group any side could beat any other side home or away. In the other Group C match Leonardo Jardim's Monaco beat Bayer Leverkusen 1-0 thanks to a goal from Portugal midfielder João Moutinho.

Seems like every year in the Champions league we are unlucky/get screwed. The 10 man performance merited the praise of all Benfica fans. I knew it would be a close match.. both teams are exceptionally talented but Jardel has always been a joke...

Seems like every year in the Champions league we are unlucky/get screwed. The 10 man performance merited the praise of all Benfica fans. I knew it would be a close match.. both teams are exceptionally talented but Jardel has always been a joke and it pretty much gifted Hulk his goal. Who was covering that side anyway?

I think we grew into the match as it progressed. If I'm Artur in the 18th minute, I let it go 2-0 with 72 minutes left in the game. Who knows? They take their foot off the gas and we catch them sleeping a few times. Jorge Jesus is at fault for not making the tactical adjustments before then.

I know it's a tough group but coming off back-to-back season finalists in the Europa League, it's time to take that next step and qualify to the Champions League Round of 16. I'm so tired of seeing this team underachieve year after year.

Champions League is the Champions League for a reason. We may look at the draw and come to our own conclusions to what is supposed to happen, but there's no easy matches home or away.
I agree with JJ when he says it's wide open, which...

Champions League is the Champions League for a reason. We may look at the draw and come to our own conclusions to what is supposed to happen, but there's no easy matches home or away.
I agree with JJ when he says it's wide open, which unfortunately could mean being completely out of European play.

Zenit has been very aggressive in becoming a powerhouse and their finances have proven that. Sadly for them, Russia just doesn't get much coverage or credibility. But I don't think people can deny the aquired talent.
As for Benfica, the concerns have remained. Lima has lost his scoring touch, so where the goals are going to come from is still up in the air. We also need to get off to better starts. That doesn't necessarily mean taking it to the opponent. It could just simply mean controlling and moving the ball around. Our defense is very suspect, and for all the transfers we really don't have guys that could step in. I know fans/pundits will mention Vitoria and..., but I have to think if they were ready or good enough they would be in there. I also don't fault Artur, it's all reaction at that point.
I did like the response by the squad in the 2nd half. We were unfortunate to not get one back, but the effort was well noted.

Not much we can say about the game. Benfica entered the match the worst way possible, and as a good team Zenit took advantage. Also Zenit speed killed the Benfica defense especially Jardel who is slow, and with the red card on Artur it would be...

Not much we can say about the game. Benfica entered the match the worst way possible, and as a good team Zenit took advantage. Also Zenit speed killed the Benfica defense especially Jardel who is slow, and with the red card on Artur it would be to difficult to come back. Benfica showed great heart in the second half and could have scored a few goals, they also had a penalty not called.

Yes it was an awful start to the match by us and Zenit took full advantage in that first half. The defending, especially from midfield was shambolic in the first half, we just don't look anywhere near as solid as last season, no surprise due to...

Yes it was an awful start to the match by us and Zenit took full advantage in that first half. The defending, especially from midfield was shambolic in the first half, we just don't look anywhere near as solid as last season, no surprise due to the absence of both Garay and Fejsa who were both awesome last year, and their replacements are not of the same class. Jardel is a Liga level player but is simply not of CL quality. Why is Lisandro not being given a chance to show what he can do? I would start him in the very next match, surely he has to be an improvement on Jardel. The less said about Artur the better at the moment, he looks totally out of sorts and confidence right now. I actually think Paulo Lopes is probably the safer option until Julio Cesar gets over his injury.

We clearly look less strong than last season. We look weaker in goal (although pending until Julio Cesar gets his chance), at left back, in central defence, DM and at second striker. This is half the team basically, so my aspirations for the CL are not very high. That being said, it's still early days and JJ has proven to be a master at developing new players. We can still qualify from this group, but badly need an away win in the next two fixtures coming up. It will be tough, but Leverkusen and Monaco are certainly beatable, even on their own turf.

And as mentioned in the article, one thing is the CL and another is the Liga. I think we have just as much of a chance as Porto or anyone else to win the Liga. JJ has huge experience in fighting for the Liga title every season, neither Lopetegui nor Silva can say the same. With Julio Cesar taking over in goal soon, Cristante adding more options to the midfield, Jonas adding more options in attack, and with both Silvio and Fejsa hopefully returning to the team as soon as possible, I am confident that we still have a strong squad and will put in a strong challenge to defend our Liga title this season, whatever happens in European competition.